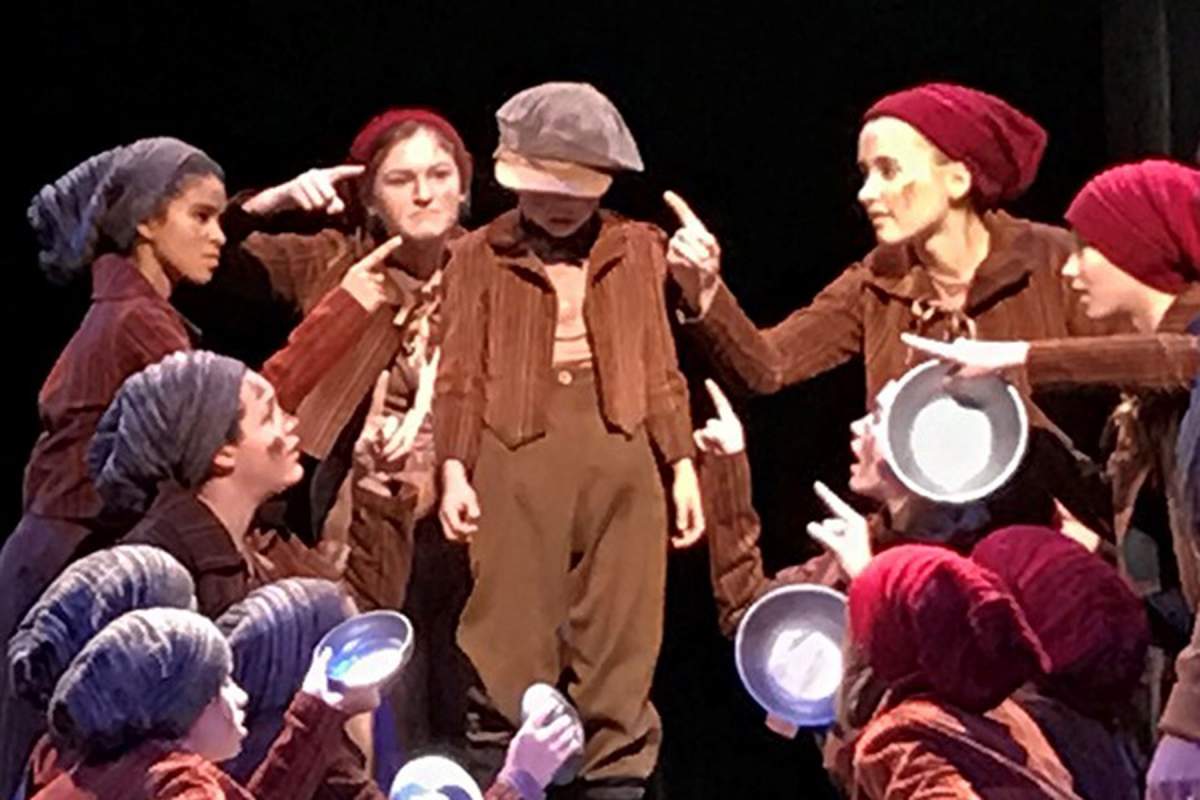 It's an artfully staged production directed by Randy White with plenty of energetic choreography by Diane Buzzell. Mark Frederick Smith's sets range from ponderous to graceful and do a graceful dance themselves. Brian Samarzea conducts an eleven piece orchestra with strings, reeds, brass, keyboards and percussion.

Oliver Twist or The Parish Boy's Progress was only Charles Dickens' second novel. Readers in the 1830s must have been more patient than our current electronic generation. The book was issued monthly just a few chapters at a time over a period of more than two years. The more you remember the novel, the more you'll be impressed with how neatly the musical's plot and numbers have been worked out.

Saturday night I saw the "Bart cast of the Workhouse Children with Ian Shaw as Oliver. Shaw is a personable actor, a good dancer and did such a lovely job with his tender song "Where is Love" that I hope he's able to do a smooth transition to tenor or baritone. Naina Prabhaker was a graceful presence and singer as the heroine Nancy's friend Bet.

Oliver! begins with the "Bart" children marching in from the sides with their pitiful empty bowls and spoons to sing their dreams of "Food, Glorious Food." Oliver is picked to ask for "more, please." And then Mr. Bumble the Beadle, Widow Corney the Matron and all the children sing of "Oliver, Oliver." The scene, like many others is quite a sight.

Charles Dickens had sad experience and a keen eye for the many grim faces of society and both Sam Cusak as Bumble and Shannon Starks as the Matron come in for the edge of his satirical pen. Oliver is sold to the undertaking Sowerby family with Philip Christiansen as the slightly comical husband and Susan Ellenwood as his never comical wife. Matt Weidenbener is their vicious helper Noah Claypool and Caroline Huerta is his eager helpmate, Charlotte.

Escaping, Oliver falls into the clutches of the Artful Dodger and his criminal coach, Fagin. Connor Starks sings well especially in "Consider Yourself" and he's just wonderfully appealing as the Dodger. This leads us to Fagin's realm and the grimy thieves' kitchen and crime college. Fagin, at least some of the time a "merry old gentleman" in the more than competent hands of Mike Price, leads the gang in "You've Got to Pick a Picket or Two."

The story's heroine, the much abused Nancy, Abby Lee forcefully leads the group in "It's a Fine Life." The song is a bitter one about making a go with some cheer in a bitter life. Lee has played Hedda Gabler, Lady Macbeth and one of King Lear's vicious daughters, she brings a lot to the character. All join in for the anthem of allegiance, "I'd Do Anything," and an act that seemed just jam packed, but short ends quite appropriately with "Be Back Soon."

The second act opens with a rowdy pub scene and Nancy leading "Om-Pah-Pah. At least on the main floor the orchestra covered her solo bits, but the energy came through fine. Guest artist Shawn Syre appeared as Nancy's fella, the brutal Bill Sykes. This is the third production in which Syre has been threatening people to say his name. Despite his brutality Nancy is still loyal. Dickens was criticized for this, but he stuck to his guns. She sings "As Long as He Needs Me."

At least briefly Oliver finds respite in the home of Mr. Brownlow, a dignified Gerard Pauwels. It's the very home that Bill Sykes had him creeping into to burgle, but Brownlow sees something special in Oliver and Alex Goodman as his housekeeper sings a lovely reprise of "Where is Love."

In a lovely part of the show we're treated to a set of neatly sung and mixed street cries. Caroline Huerta sings of Roses, Maria Walker of Strawberries Trenadee Staggs of Milk and Craig Franke offers knife grinding. This expands to a circus scene complete with a Richard Baskin, Jr. as a Ringmaster, Mathew Wiedenbener clowning and Claire Logan as a graceful ballerina.  It's a very pleasant respite before things all get grim again.

Back at Fagin's den there's brief reprise of "It's a Fine Life," but Bill is clearly deeper into crime although Nancy is still loyal. Fagin delivers one of the hits from Oliver!  as he's "Reviewing the Situation." Mike Price and violinist Emily Nehaus do a masterful job as they duel with the alternating thoughts of the piece. The tragedy does work its way as Bill kills the loyal Nancy and is shot dead. The Beadle and the Matron of the Workhouse have become its clients.

The shows ends as Oliver is safely united with his family, the whole cast is in on the finale and Fagin and the Dodger reunite to "Review the Situation."

The Cardinal Stage Company's production of Oliver! at the Buskirk-Chumley Theatre continues through December 31st

At the heart for you, I'm George Walker