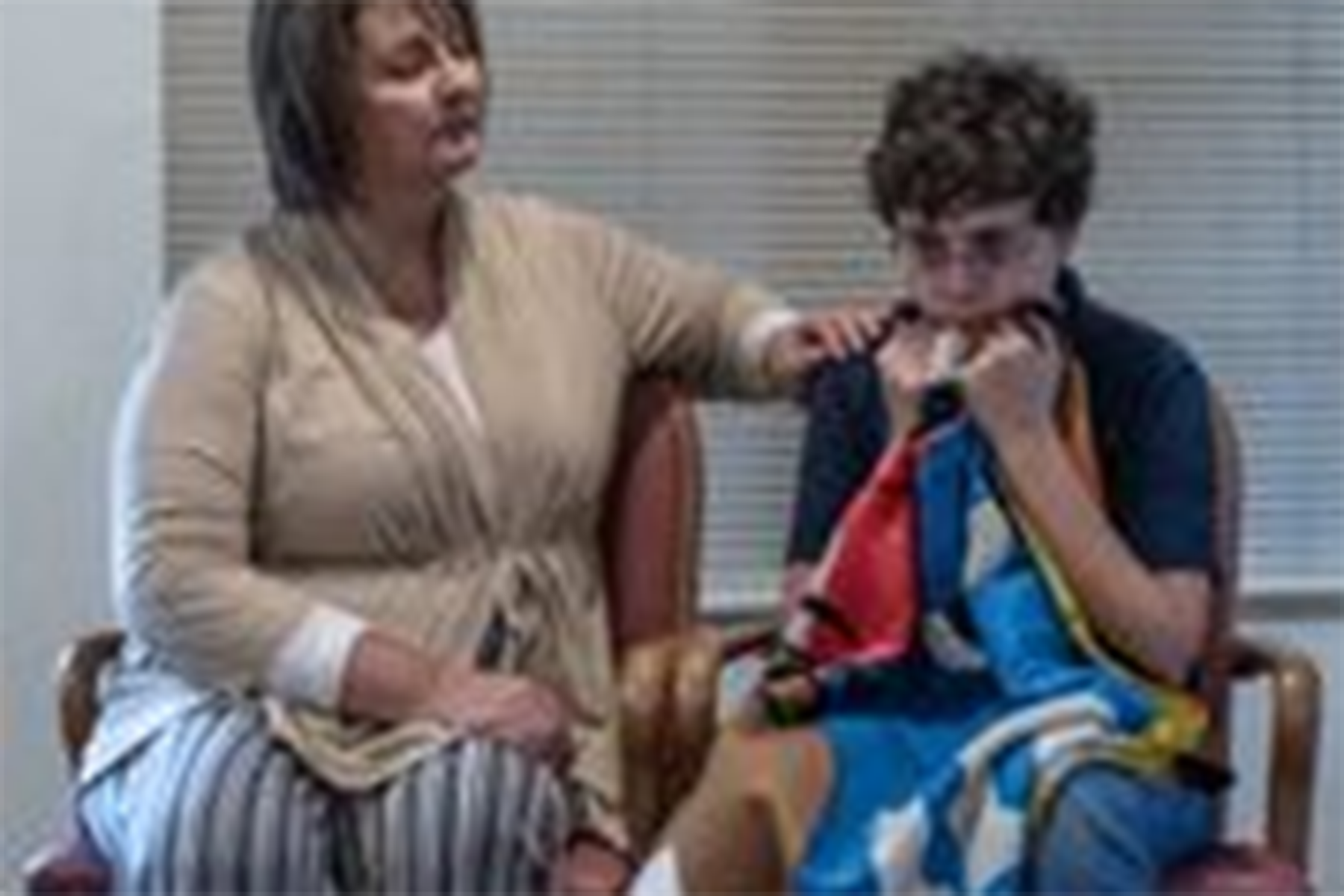 The Jewish Theatre of Bloomington presents Israeli playwright Anat Gov's Oh God in the intimate Rose Firebay of the Ivy Tech John Waldron Arts Center. It's a three character show with Julie Dixon playing Ella the therapist, Ron Kalinovsky appearing as her violin playing autistic teen son and Ken Farrell as God. At least that's what he claims to be and despite the Ella's reluctance, he eventually convinces her that he is indeed God, that he needs help and that she is the person to treat him.

Frankly religion, unless it's mixed in an uneasy alliance with politics doesn't get much time on the stage. Yes, there was that mix in the JTB's Church and State. And there's the failure of a Christian entrepreneur's faith in Cardinal's recent production of The Christians. And there's the one revealed to Joseph Smith in the upcoming The Book of Mormon at the IU Auditorium. But, unless you go back to Archibald MacLeish's J.B., it's hard to find a play with an unapologetic God front and center.

Ken Farrell as God…the "I am who I am" of the Hebrew Bible is not only front and center, he's very much in need of therapy. As he says, "I've been depressed for five thousand years." Ella tries the usual questions on him, but since God lacks a mother to blame, a missing father to lament and even a birth trauma, she's pretty much out of the standard therapeutic openings. In desperation, she suggests a psychiatrist who might in this case, prescribe drugs, but God is convinced that she is his only hope.

When she asks him why he chose her, he offers two explanations. One, that although he is beleaguered by millions of requests for aid, she never asked him for anything. And two, that she believes in him. The first seems pretty obvious, Ella is a tough independent woman. The second, her belief, takes much of the play to explain and I won't give it away.

Although there are several moments when Ella and God give up, the therapy continues and the focus is on companionship and even love. God says that everything was fine for him as a creative artist even through the fifth day. Ella asks him to focus on that moment of joy and then to examine the aftermath. As you may recall, it's the creation of Adam…a creature to tend the garden and share the creation. God has a companion and perhaps even a friend. An increasingly human God confesses that when he creates Eve for Adam he's a bit jealous that the man often prefers the company of the woman.

When the issue of the snake comes up, God waffles. He says it was just a natural part of the garden, but Ella isn't buying that explanation of the test. In the ensuing discussion God confesses to a feeling of pity for his two leaf clad creations as they set out into the world. Ella is taking more command and she brings up the promise to all from Noah, the creation of the murderous twins Cain and Abel and eventually, Job. With each of the revelations she comes closer and closer to seeing God as a sick individual who's currently seeing himself as a victim and indulging in, wallowing in, self-pity.

It's the story, the character of Job that leads to the breakthrough. God acknowledges that Job was indeed perfect and that despite the trials and tribulations that he unleashed, Job remained faithful and that his own blustery denial of responsibility was hollow. It seems that God, a bit like all of us has a bit of the devil in him and that acknowledging it is the only way for him to escape his depression and regain his powers.

Ken Farrell makes a classy God. Julie Dixon is a harried and then harrying therapist. Ron Kalinovsky as her autistic son Lior plays the violin in a consoling fashion. Dale McFadden directs.

There is happy ending, God with renewed powers unleashes rain on the family's parched roses while Lior does manage to blurt out the word "momma" to Ella.