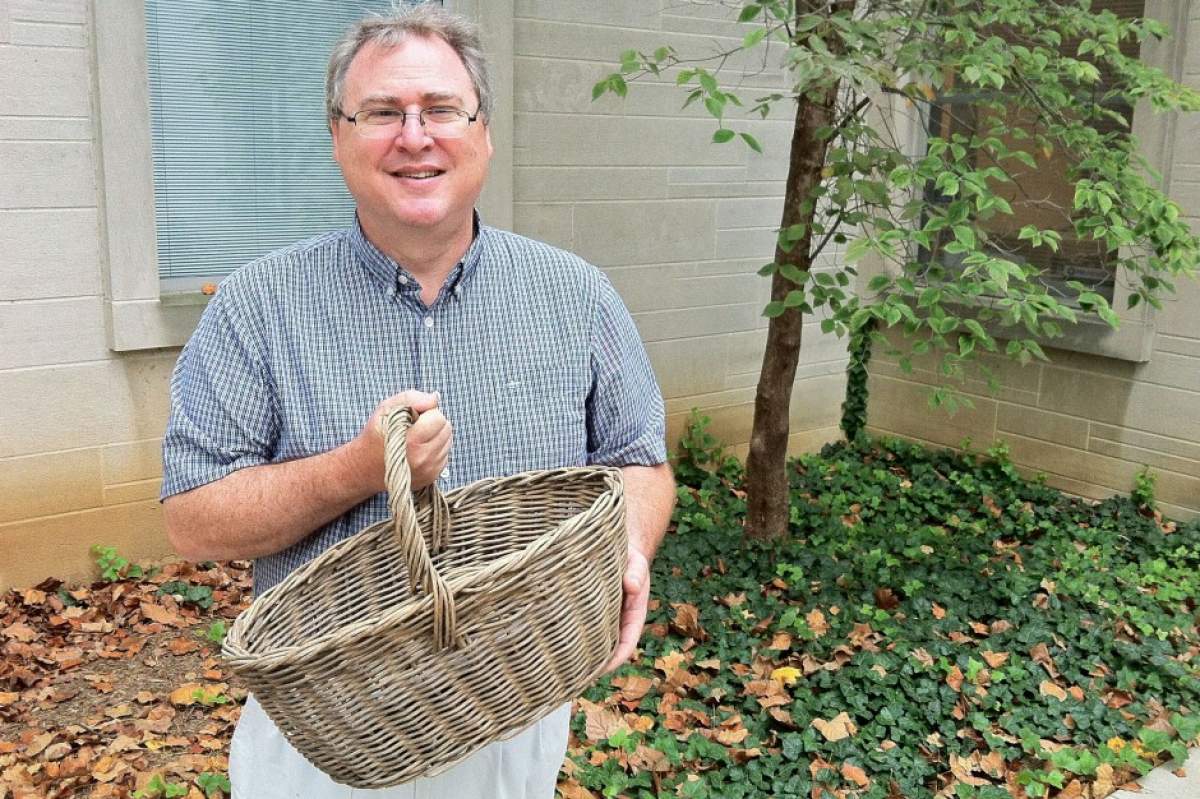 Jon Kay came into the WFIU studios carrying a basket.

"This is a basket that my great-great grandmother used to both feed the chickens and gather eggs in," he said.

It's an oak road basket. His great-great grandmother lived in Heltonville, Indiana. You can imagine her draping it on her arm as she did chores around the farm.

"It's made with these long, white oak rods, which the makers would have pulled through these dyes to kind of render the splits of white oak into round form," he describes, "And then it's got a single handle over the top."

It's a study basket. You can tell it took a lot of effort to bend and weave the oak rods into the oval shape.

Makers From The Past

This family heirloom was the inspiration for Kay's latest research project, looking into the history and eventual disappearance of oak road basket making in southern Indiana.

"This was the type of craft that someone would be a farmer during the day and in the evening they may go out and make four or five baskets," said Kay, who is theÂ director of Traditional Arts Indiana. "Lots of times making baskets all winter long with the hope of being able to sell a barn-full of baskets come spring or come fall."

He traced the practice back to three men (and this was a craft practiced almost exclusively by men).

Henry Hovis brought the tradition to Brown County in 1848. George Bohall taught his five sons how to make baskets. That family was so famous, oak-rod baskets were often called Bohall baskets. A bit later, Reub Morgan and his family got into in basketry. They sold their wares to hardware stores and to their neighbors.

Kay combed through historic photographs and discovered that these baskets were part of everyday life for people like the Ping family.

"You can see the shag-bark hickory trees all around them, and you see two of these oak-rod baskets on the forest floor as they're sitting around gathering up the hickory nuts," he said.

It's hard to pinpoint exactly when the craft stopped. Kay says it just sort of faded away.

He also found an image of a family posing behind a long dinner table, "The food all spread out on the table, and underneath the table, nicely tucked away, are a few of these oak-rod baskets. They would have carried these baskets full of food to important family gatherings when they went."

That was in the 1920s and 30s. Demand went up when tourists started visiting Brown County and wanting these baskets as souvenirs. But after World War II, traditional baskets lost favor to more decorative versions imported from Kentucky and Tennessee. And in terms of locals using them for farm work, it made more sense to use plastic buckets than oak rod baskets.

The grandsons of Hovis and Bohall made baskets through 1980s, but that was the generation that didn't pass the skill onto their kids.

It's hard to pinpoint exactly when the craft stopped. Kay says it just sort of faded away.

Blueprints Of A Lost Craft

There isn't a handbook or how-to guide for making oak rod baskets. For his research, Kay had been planning to measure every last inch of his great-great grandmother's basket to learn as much as he could about the makers' process.

But then he started asking around.

"One of the best leads is I actually went to talk to Clyde Morgan, Reub Morgan's son, who actually made one basket when he was a kid," he said. "He's probably the last of the makers, you might say, even though he says he's not a basketmaker. He made one."

Kay asked to see the place where Reub Morgan did his work back at the turn of the century. (Reub died in 1981.)

"He said, â€˜Our family doesn't own that property anymore.'"

Kay insisted, because he knew Morgan used to write his patterns on the wall where he worked.

"He said, â€˜I don't know what you're talking about. Let's go see if we can find it.'" They asked the current property owners if they could take a look around. "And on the posts of the walls of his barn, (Reub) has all the materials written out what lengths, how many rods, what length of rod they needed to be. The recipes, you might say, right there on the wall of the barn," said Kay.

Jackpot. He snapped pictures so he could analyze Morgan's process and write up his recipes.

The current owners say Kay got there just in time. They had been thinking about putting a fresh coat of paint on that wall.