A Well Above Normal Production Of "Next To Normal" 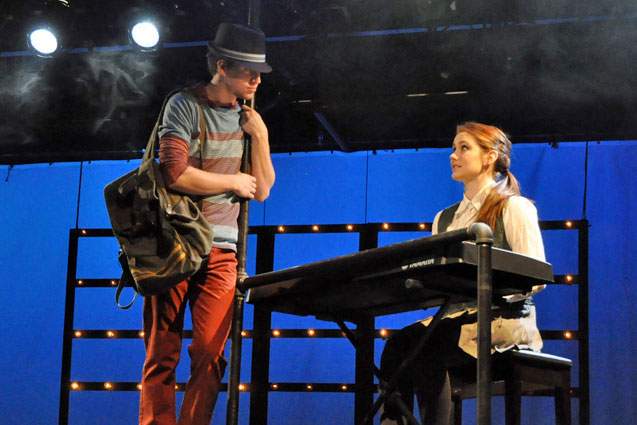 Next to Normal is a rock musical that explores a mother's struggle with bipolar disorder and its effect on her family. The Cardinal Stage Company's well orchestrated production, directed by Randy White is blessed with a strong cast of really good singing actors.

Central to the story is Tina Stafford as the tortured mother, Diana. Diana's mental problems seem to have been triggered by the death of her infant son, Gabe. She's so kept him in her memory that he appears as a grown up high school senior played by Colin Van Wye.  Stafford makes Diana a picture of both the ravages of mental illness and a person's courage in its face.

Diana's husband, Dan played by Joe Tokarz fights to help Diana seek treatment and to keep the family together. It's a central part that could be dull, but Tokarz's concern and energy keep it very much alive. Son Gabe is real for him as well, but unlike Diana he tries to block him out.

Family tensions abound in Next to Normal and Hannah Slabaugh plays the much put upon daughter Natalie. Nat Zagree is her winsome boyfriend Henry. The two make their on- again, off-again love story a charming part of the show.

The music for Next to Normal is definitely rock with occasional dips into country. It's an attractive strident score. Sometimes I thought that the music didn't reach the depth of the touching story, but music director Dan Lodge-Rigal leads a sextet that includes a violin and a cello so there's a good deal of nuance to the sounds.

Saturday night's packed house applauded individual numbers, especially during the first act and  at the curtain gave the show and the cast a standing ovation.