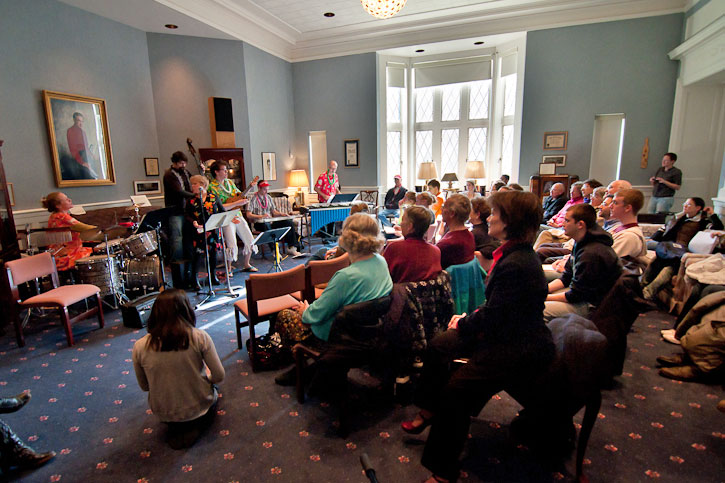 Straying From The Norm

Hoagy Carmichael has been called the most talented, inventive and sophisticated tune smiths of the first half of the 20th century. Over 80 years after he wrote "Stardust," his music still sounds fresh and alive.

"There's a breadth to the music he's written as well as a sort of integrity and quality to the music that allows it to be interpreted in different ways and it still holds up," says Alan Burdette, the Director of the Archives of Traditional Music.

He says that since all the music on this installment of the Noon Concert and Lecture Series is Hoagy's, it challenges the performers to venture away from his greatest hits, like "Georgia," "Heart and Soul" and "Stardust."

Rachel Caswell, a jazz singer based in Bloomington, likes the challenge of performing something new. She dug up Carmichael's only Christmas tune for the concert, "My Christmas Song For You," something she was pretty sure no one in attendance had heard before – including Jeremy Allen, her accompanying bass player for this performance.

"Jeremy and I have known each other since we were in high school," she says. "I know if I give him a clear enough chart that's cooperative and clear, he'll know."

"I'm very lucky in that just about every time I perform, I get to do whatever I want, have fun, experiment and play around with the music because I'm Kid Kazooey, god dang it!"

Kevin McDowell, aka Kid Kazooey, performs on the Hoagy birthday concert every year, and every year he does something a little bit different. This year, he fronted The Hoagy Hula-Baloos, a six-piece band made up of slide guitar, vibraphone, drums, bass, Janiece Jaffe on vocals and Kid on vocals and ukulele. They tackled three of Hoagy's Hawaiian-inspired tunes: "Hawaii, Pearls of the Sea," "A Hawaiian Evening Song" and "Lovers Hukailau."

Burdette was not surprised to hear that McDowell had ventured off the beaten path of the Carmichael repertoire to find these exotic tunes. "Kevin has this tremendous love for Hoagy Carmichael's music, and I think each year it's clear he's learned a little bit more about Hoagy's career and his music," say Burdette.

As with any birthday party, the event concluded with the singing of "Happy Birthday" and cake for everyone. The musicians offered personal wishes to Hoagy.

For Caswell, she would like Carmichael to know that his music continues to touch people 30 years after he had passed away.