The Last Night of Ballyhoo Review 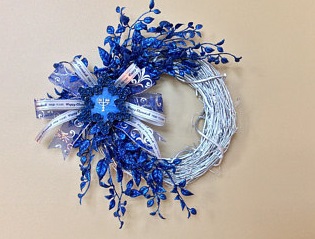 The Jewish Theatre of Bloomington presents Alfred Uhry's The Last Night of Ballyhoo in the intimate Rose Firebay of the Ivy Tech John Waldron Arts Center. Uhry is a southerner himself. He's also the author of Driving Miss Daisy. I'm George Walker.

Ballyhoo in Atlanta attracted young German Jews from all over the south for a week of parties and activities culminating in the big dance on the last night. More than a few wedding announcements came on those evenings. This particular year, 1939, Atlanta was a magnetic city. The week also promised the premiere showings of Margaret Mitchell's Gone with the Wind.

The Last Night of Ballyhoo opens on a comfortable living room with a Christmas tree. Lala Levy, played by Sarah Leaffer has just added a star to top the decorations. She's bubbling over with the excitement of the premiere and is thrilled that Clark Gable may be as little as five miles away. Lala flits from one artistic pursuit to another and currently she claims to be working on a novel called Though Your Sins be Scarlet. At least for the moment she has far less interest in a date for Ballyhoo than her critical mother Boo Levy.

Boo is a wonderfully intelligent woman with a masterful grasp of families, their genealogies and their ups and downs through the south. She's matched and occasionally overmatched by her sister in law, Reba. The two dual about family histories and events in conversations that seem to have been going on for years. While Boo as played by Gail Bray is incisive and confident, Reba Freitag played by Julie Dixon is a bit dittsy and frequently funnier.

The man of the house is Adolph Frietag. Boo is his sister and Reba was the wife of his brother Simmon. Adolph is a successful businessman. He's the owner of Dixie Bedding. Adam Crowe plays him as a man consciously comfortable with himself and his life but also quite willing to think beyond it. It's Adolph who's hired Joe Farkas a young New York Jew  with roots in Hungary and Russia to come to work for him and to meet the family.

Frankly, the family doesn't quite know what to make of Joe and he's a bit perplexed by them a well. Adolph describes Joe as coming from East of Elbe. To Joe the Freitag Levy's don't seem Jewish at least not in the way that he's used too. Meanwhile the Freitag Levy's wonder about Joe's perspective as well.

Reba's daughter Sunny Freitag comes home on vacation from Wellesley where she's actually been studying a bit of comparative religion. Adolph sends Joe to meet her at the train. Her initial reaction to Joe is that he doesn't sound like Atlanta. He parries that she doesn't sound like Brooklyn.

The excitement of Gone with the Wind ebbs and the focus is on Ballyhoo. Joe has quietly asked Sunny and she's consented. Lala is on pins and needles. There's been talk for weeks of a possible pairing with a distant Peachy Weil, but thus far no invitation and when Lala is finally pressed to call, she learns that he is not at home. In one of my favorite moments, mother Reba calls the family's maid and gets her to see if Peachy has taken his tuxedo. When the report comes back that the tuxedo and the dancing shoes are both gone, she's exuberant.

Peachy, in the person of the abrasive Devin May does arrive and after giving Lala some grief invites her. There's more to the tension before during and after the dance with Lala coming home engaged and Sunny coming home by herself, but in time there's a happy ending for both girls and the family that seems to suggest a bit of shared values. Values that will become even more sharply considered in the dark years to come.

The Jewish Theatre of Bloomington's production of The Last Night of Ballyhoo is directed by Uhry veteran Dale McFadden.  This is his second production of …Ballyhoo… and he's also directed Driving Miss Daisy. McFadden and his actors show real sensitivity to the Southerness of Uhry's vision, the cadences of his characters, their foibles and their charms.

Scenic design and props for the show were by Dan Tracy with lighting by Bridget William, sound by Macy Kloville, and costumes by Emily Solt McGee.

The Jewish Theatre of Bloomington's production of Alfred Uhry's The Last Night of Ballyhoo plays Dec 2-10 in the Rose Firebay of the Ivy Tech John Waldron Arts Center.

Their next production is of Jason Odell Williams Church and State directed by Liam Castellan in June.