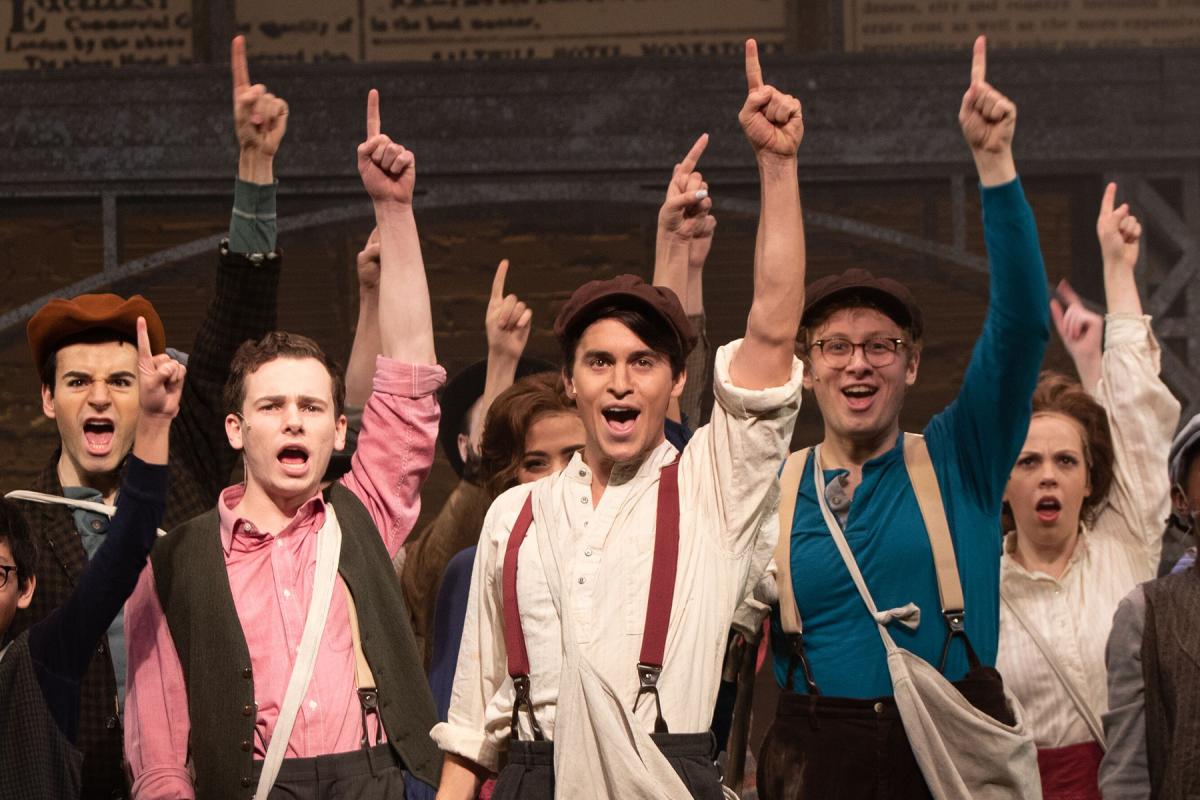 After a week in Chicago, I caught up with the Cardinal Stage Company's Newsies at the Buskirk-Chumley Theatre. It was well worth the wait. The cast includes the fourteen members of Team Brooklyn led by Coen Berin as Les. In alternate performances, it's Team Queens led by Rhys Nelsen. Clearly, the parents, grandparents and kids in the audience were there to cheer on their pals. They and the rest of us had a lot to cheer about.

At the center of Newsies is an actual strike. It's a David versus Goliath story. In the summer of 1899. The newspaper barons decided to up the cost of paper. Their on the street sales force revolted. Led by the dashing Jack Kelly, Julian Diaz-Granados with instruction from the scholarly Davey, Cole Weston they actually united to form a union. Street sales stopped and circulation figures, for Hearst's Journal and Pulitzer's New York World dropped.

The first act moves to a clear conclusion with the triumphant "Seize the Day" with Davey, Jack, Les and the newsies united, but…the Brooklyn newsies, the largest group, are undecided and Jack's longing for a simpler life in Sante Fe leads to his taking a bribe from Pulitzer, a smooth singing George Mulder. We're happy with the unity, but a little nervous about the next steps.

The second act is a bit more complicated. It opens with the show's moving heart song, its Crutchie, James Stibbe writing to Jack from the jail of the kid's Refuge. The newsies of Brooklyn, the country's sixth largest city, come in with "Brooklyn's Here" sung from near the ceiling by Spot Conlon, Sean Puent. Later Jack and the clever talking Katie Scarlett Swaney as Kate the pioneering newspaper reporter share a tender moment of romance with "Something to Believe In."

I should mention Isabel Holaday who as Jack's patron and the irrepressible parasol twirling, vaudevillian Medda Larkin sings a lovely period piece. And I couldn't bear to ignore Shawn Syre as the Weaselly news seller with his cohort of Dom Pagliaro and Joseph David Massingale as the Delancy brothers.

The strike is settled with a strong push from the ‘bully' Governor Teddy Roosevelt, Tom Trent with a compromise that saves face for all. The newspapers price increase will remain, and the owners agree to buy back unsold copies. Katherine will continue to work as a reporter, off the women's page, and the artistic Jack will do political cartoons. There's the concluding "Once and For All" song and the finale to wrap up a production that drew loud applause and even a bit of a standing ovation.

Director Kate Galvin has taken the Disney movie off the screen to put together an eye and ear catching show. Costume designer Brittany Kugler has done wonderful work with the dress from the ragged to the dignified. Keith Truax's lighting kept our attention focused on just the right parts of the stage. Choreographer Dann Dunn has the athletic cast dancing in patterns that keep changing and offer solo spots as well. Musical director Hana J. Cal has the whole cast singing, pays special attention to solos and keeps a gentle hand on her varied and supporting orchestra.