Mutual Projection: We Found Love In A Placeless Place 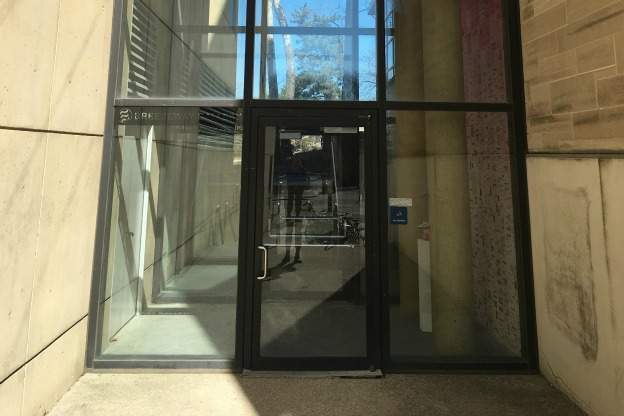 Detroit-based digital artist Molly Soda makes artwork about the way we connect with each other in the modern world, and her canvas is usually the Internet. But currently there's an opportunity to experience the former Bloomingtonian's work in the physical realm. A tiny glass space that allows passage from the front of the IU Art Museum to the back that has recently been claimed as a gallery is showing her piece Mutual Projection.

The installation, curated by IU Fine Arts Department alumna Jenna Beasley, "comprises physical documentation of a 941-page text message conversation the artist maintained in 2015 with a long-distance acquaintance whom she had met only once in person." The unedited correspondencereplete with the requisite "lol"s and optional punctuationcovers a 13-foot wall from ceiling to floor in a liminal space that's been christened Breezeway Gallery.

This whirlwind relationshipit's so important to you for such a short period of time, until you pass through, or you forget about it, or it gets lost on your phone.

With its basis in contemporary media, Mutual Projection is representative of the work of Molly Soda (born Amalia Soto in San Juan, Puerto Rico in 1989), who works in video, GIFs, tweets, and web-based performance. In 2013 Soda was included in Rolling Stone magazine's article "One of 50 Things Millennials Know that Gen-Xers Don't" and was ranked 24th on Complex magazine's list of Most Important Artists of the Year.

Mutual Projection is the fourth exhibition in Breezeway Gallery, which is overseen by IU History of Art graduate student James Payne, under the advisement of Professor Jeffrey Saletnik. "I was interested in the space because it was architecturally spectacular but completely without purpose," Payne recounts

It was a heated and cooled room that consisted of two doors so you could walk through itthat's it, hence the name. It gets a fair amount of pedestrian traffic from students who don't want to walk around the museum to get to the other side. So there is a captive, if incidental audience. The gallery provides a way to interject the "art" of the art building to a public that is mostly concerned with cutting through, and may not even know it is the art building. The space is enclosed in glass, almost like a display vitrine, and radiates at night.  I was interested in this unused space in a very desirable section of campus. (Funny, too, is that I could operate a gallery in an I.M. Pei-designed space!) It turned out that one of the reasons it was unused is that no one IU entity had lain claim to it...It's not a part of the museum, or the library, or the fine arts building. It just is.

The beautiful, unclaimed passageway provides the most apt of settings for Molly Soda's digital love story.  "This whirlwind relationship," she explains"it's so important to you for such a short period of time in the span of things, until you sort of pass through, or you forget about it, or it gets lost on your phone."

Listen to a conversation with artist Molly Soda at the arrow above the photograph.