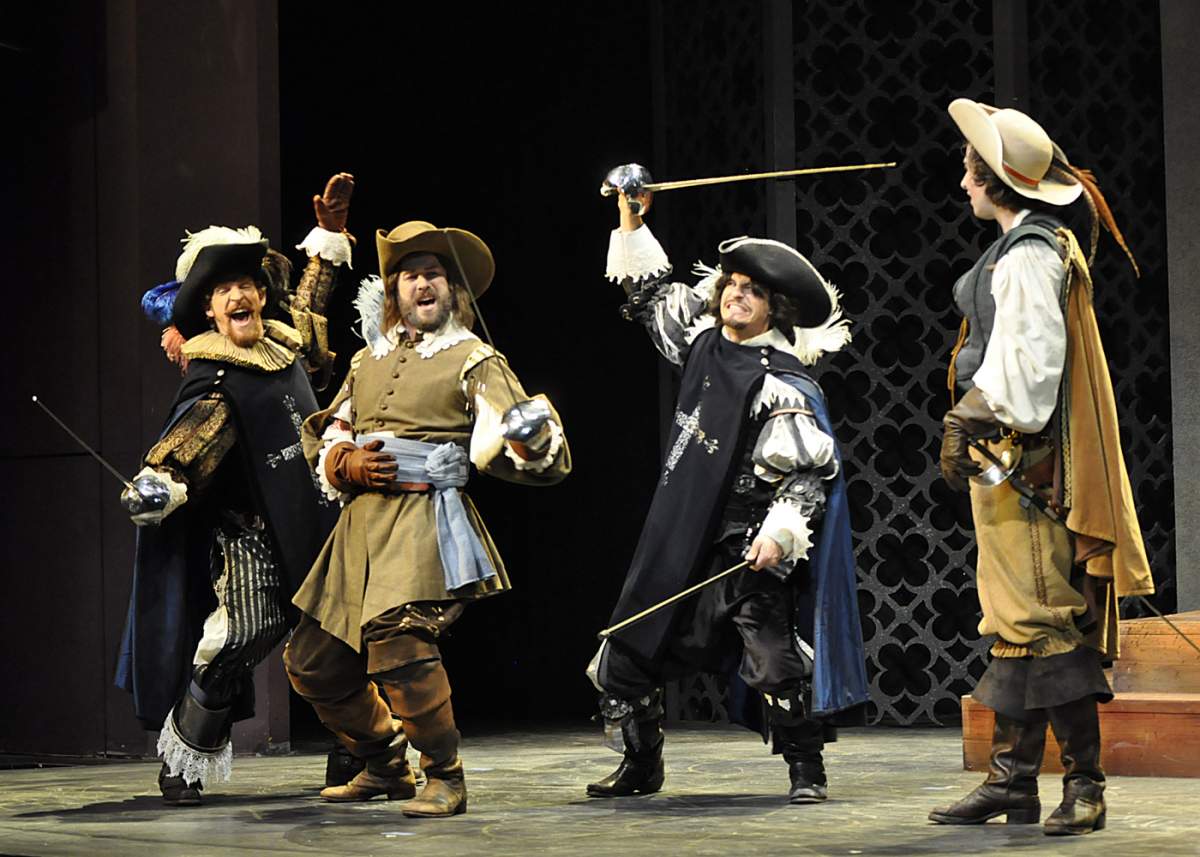 Alexandre Dumas' The Three Musketeers is a coming of age story filled with action, adventure and romance. It's perfect for a teenager…but it is a long book and so teen agers seldom have the patience to finish it. The IU production fully realizes the teen age spirit as the musketeers of the title act with all the esprit and energy of a trio of middle schoolers out for some fun. There are some tense moments in the play and some too dark parts, but a generally boisterous quality prevails.

There's plenty of sword play. In just one of the many scenes there were eight combatants on three levels. This added up to a total of twenty feet of swinging and thrusting steel. It's a tribute to fight choreographer Adam Noble that the fights looked great and everyone was safe.

McCauley Richards, newly recruited from sports journalism, had a raw openness that worked well for the character of fresh young Gascon, D'Artagnan. The boisterous Aaron Kirkpatrick, the flashy Taylor Crousore and thoughtful Luke Denison were the charmingly varied musketeer gentlemen of the title.

Ryan Dooley as King Louis and Andrew Benowich as the scheming Cardinal Richelieu both played their parts for laughs and got them. Somehow Thomas Beaver as the Cardinal's henchman managed to keep a twisted sneer on his otherwise attractive face throughout.

Maddy King was very much the Spanish lady that Louis had married. Courtney Lucien was affecting as her innocent seamstress. Andrea Mellos was frightening as the evil Milady Clarik, a figure so dark that the working out of her story stretches and threatens the overall effect of the play.

Aaron Densley was a magisterial Duke of Buckinham, the Englishman in love with the Spanish wife of the French King. Sean Magill was his faithful Felton, a sad victim of the cursed Milady Clarik.

The Three Musketeers makes efficient use of its large cast with lots of doubling. It's male heavy. Twenty-four actors, nineteen men and just five women play sixty-five roles. Covering twenty-four of them were Eric Sigmundsson, Kurt Semmler and Harry Holmes. They were an inseparable trio, sometimes in unison, sometimes in harmony. The other actor with big numbers was Ross Van Dongen, who along with a brief appearance as D'Artagnan's father and the part of an English Lord also showed up as the host of three different inns and the proprietress of a fourth.

Alexandre Dumas' The Three Musketeers is a big novel with action that sprawls across France even across the channel to England during the reign of Louis XIII. Director Murray McGibbon uses nearly every trick in the book. And with help from costumer Katie Cowan, sound designer John Allerheiligen, composer Andre Hopson and lighting designer Abby Wells manages to have its characters and story very dramatically sprawl into, onto and around the clever stage set of Tim Barbiaux .

The Three Musketeers at the Lee Norvelle Theatre and Drama Center continues with performances Tuesday through Saturday at 7:30 and in a 2 o'clock Saturday matinee.