Behind The Music: Tuning Forks And Coffee Breaks 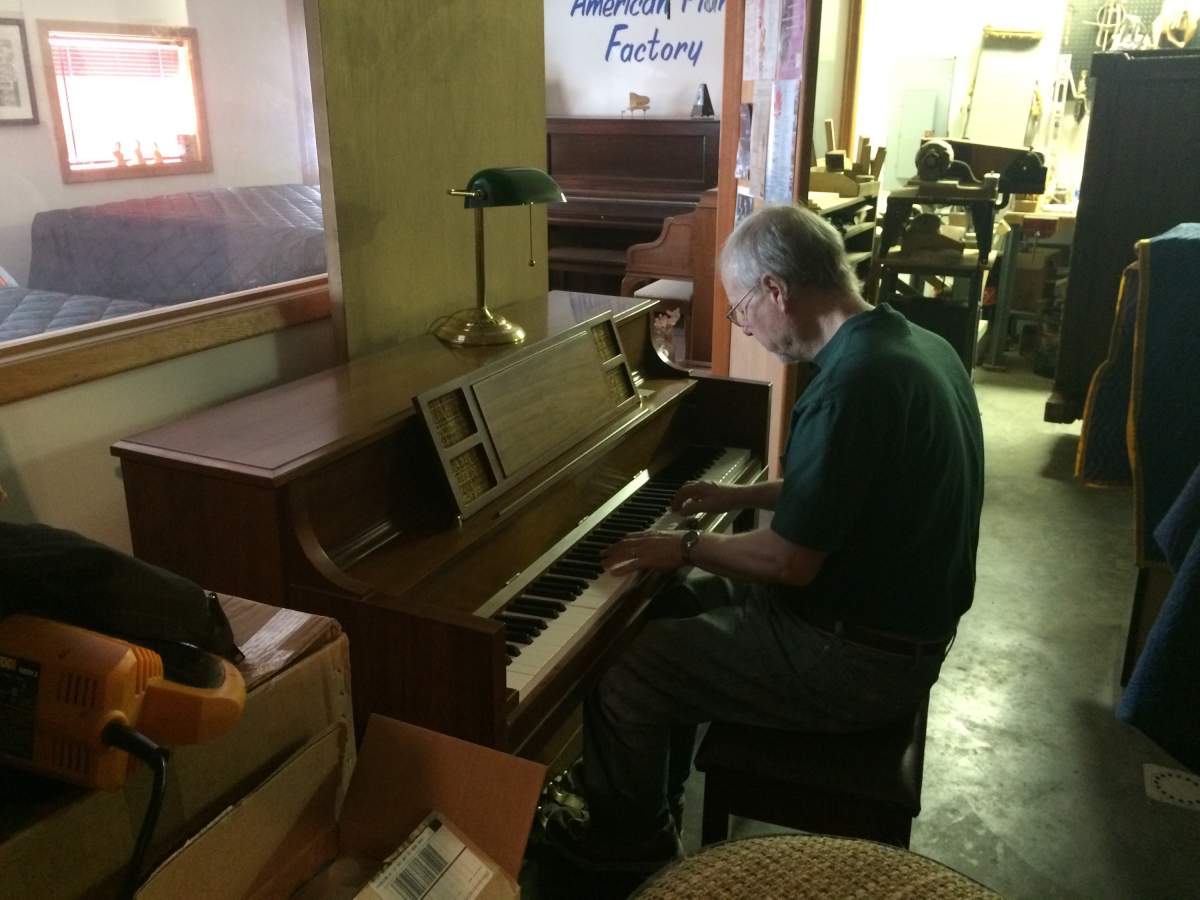 The American Piano Factory isn't really a factory at all. It's a workshop attached to Dave Cox's home on the outskirts of Bloomington, Indiana.

Cox has owned the American Piano Factory since 1988, and has spent that time fixing, tuning, restoring and rebuilding old pianos. The workshop was once a garage. Cox converted it. Tools hang on the whole left side. A small closet a few steps away from his work bench houses all of the parts Cox needs to do a rebuild:  "hardware, wooden parts, strings, felt."

Cox isn't the first owner of the American Piano Factory. Leroy Norton started the company in 1975. Cox was Norton's apprentice. "I was fortunate to meet him and have him as a mentor for several years before I was left to kind of fly on my own," Cox recalls.  And the transition wasn't easy.  "The first four or five years I was here," he remembers, "it was scary and intimidating being here in Bloomington around all these musicians."

Cox leaves his factory regularly to make house calls for tuning jobs. When he works, he uses a specialized wrench called a tuning hammer to tighten the strings. Using an app on his phone, he watches the pitch of each string go from flat to sharp and back again until the sound is just right. "It's like how to hold a baseball if you want to throw a fast ball or a curveball."

Isabella Bates-Fashahi is one of Cox's faithful clients. Ten years ago, she says, "I was just a kid. I had just gotten my first piano which was a piece of garbage, but I was just so happy to have a real piano."

The next year was a rough one for Bates-Fashahi. She tried graduate school but it just wasn't for her. The first time Cox came to work on Bates-Fashahi's piano, he heard her play.

"And he was the first person to really recognize that I had talent. I think he could see how much pain I was in that he offered me the Perzina at the most base price."

A Perzina is a brand of piano, a really nice one from Germany.

"But it's the most important thing I owned," Bates-Fashahi concedes.

Through their professional relationship, the two became close friends. In fact, many of Cox's clients have become his friends over the years. It doesn't hurt, Cox said, that they already have at least one thing in common, "We both love pianos."

As in Bates-Fashahi's life, the piano has provided Cox solace during trying times. "Music really saved my life a long time ago when I was younger. I was totally uncertain of where I was going professionally at that point in time. I knew I'd always love music and it would always be in my blood, but I never felt confident enough in my playing to think that I'd ever really be able to make a living at it."

After 27 years at the helm of American Piano, Cox's professional path has been well established. Even if it didn't turn out the way he'd planned.