Music That Moves Us: The Civil Rights Songbook 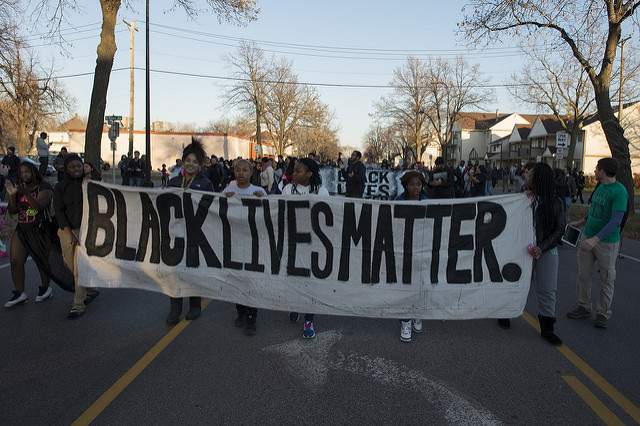 It's Not a Civil Rights Rally Without Music

On a warm June day, the courthouse square in downtown Bloomington is packed. Â It's one of many rallies held across the country over the course of the last two years in support of the national Black Lives Matter movement.

At the rally, a live band is playing. The words of Sam Cooke's "A Change is Gonna Come" ring out across the Courthouse Lawn, accompanied by an electric guitar, which later provides a steady beat for two rap artists.

Dexter Clardy, Mike Gronsky, and Chris Redding Jr. were invited to play at the rally by a friend, and they put their heads - and musical talents - together to create a performance that included classic songs from artists like Sam Cooke, as well as original songs and raps.

"We played two original songs," GronskyÂ said in an interview after the show, "one that Dexter had written and one that Chris wrote, and I had arranged music to those separately very, very recently â€¦ and you know we just we built the show around the audience and the purpose of why were playing the music."

The threeÂ met and became friends in the popular Indiana University Jacobs School of Music class known as "Soul Revue."

They play music together often in class, but the three friends came together for this special occasion because the deaths of so many black men and women at the hands of the police over the past few years moved them to action.

They knew it was time for change, and they wanted to be a part of it, not just as concerned citizens, but as musicians.

In preparing for the June rally, Clardy was able to adaptÂ aÂ rap he had already writtenÂ about a confrontationÂ between law enforcement and the black community.

Musicians have been making music to lend to social justice movements for centuries. African American civil rights movements past and present are awash in music.

"I think when you think about the Civil Rights movement, or civil rights in general, you've got to think about how it inherently requires us, or a group of people I would say, to galvanize around a sense of struggle but also the idea of resistance," Indiana University professor Dr. Tryon Cooper says.

Cooper is an assistant professor in African American and African diaspora studies at IU. He is also a classical and jazz guitarist, a lyricist and composer, a two time Emmy award-winning, and a six time Emmy-nominated film score composer. Dr. Cooper has traveled around the world performing and recording with such artists asÂ Diana Ross, Bo Diddley, Max Roach, and many others.

"So if you think about it like that," Cooper says, "And going towards your question about when particularly did black people start using music to forward the struggleâ€¦ you gotta think about it.. it really goes as far back as the eighteenth and nineteenth Century. Negro spirituals."

"Enslaved black folk who were really involuntarily brought over here from Africa â€“ from west and central Africa â€“ to The New WorldSouth America, the Caribbean, and here to the United Statesthey've always resisted. From the coast of Africa, to the Middle Passage when many of them would jump off of ships to what they deem to be Freedom â€¦ you know, â€˜I'd rather die than to be on this ship and be a slave.' Â You know, as another Negro spiritual says â€˜Before I'll be a slave I'll be buried in my grave/Going home to my Lord and be free."

"So in the eighteenth and nineteenth centuries many of the slaves actually converted to Christianity," Cooper remarks. "While some chose to worship in ways that reflected the heritage of their European counterparts, others choose to worship in ways that reflected their African heritage. So that resulted in what we now know as the Negro spiritual. It's a kind of religious song, especially outsiders had thought of it as a religious songâ€¦ but this is a fight song. This is a resistance song. "Soon I will be done with the Troubles of this world" . Â [The lyrics include the phrase,] 'Going home to live with God.' Â But [â€˜Home']â€¦ Where is home?"

"Some might think of it as well I'm going home to heaven and in the metaphysical sense, freedomfreedom from this physical bondage. Butâ€¦ then there's the double entendre, the double meaning in the Negro spiritual," Cooper offers.

"Home could be to the North. Physical escape! So this kind of idea of like always thinking of getting out of this bondage, this idea of freedom, always resistingâ€¦ The enslaved African was not this passive person. They were not these passive people that just stood by and let these things happen to them. They were always resisting. And so that idea of resistance has been transformed in various forms and subsequent historical moments."

"So in 1964 Sam Cooke says 'A change is going to come,'" Cooper continues. "And you've got to contextualize that historically to figure out what is he, what is that song, to come, to get at the meaning of that songâ€¦ Having seen 1954 Oliver Brown versus the Board of Education, which has had just monumental impact on desegregation; having experienced the social climate of an Emmett Till down in Munning, Mississippi, who was basically lynched; the Montgomery bus boycott in 1955â€¦. all of these things. When Sam Cooke says "A Change is Going to Come" this is reflecting the consciousness of the people, the idea that surely something else is going to come we've had laws, we've had marches, we've had legislation, but surely something else has got to come."

Pushing On Through Pushback

Though many protest anthems have become timeless hits, the price of discussing political issues has been high for some artists.

"I mean this goes as far back as Paul Robeson in the 1930s and 40s," Cooper explains. "When his passport was taken... He can't travel, he can't support himself economically anymore, because of the way that he spoke out, and spoke truth to power. We saw this with Beyonce just recently with her performance of "Formation." And so you see these things are nothing new. Artists have always been grappling with â€˜what do I say?' and â€˜how do I say it?' and â€˜what are the implications of me saying it?' that thing of being radical, being that radical voice. I mean James Brown, when he did say, "Say it Loud, I'm Black and I'm Proud," he lost half his audience.

Clardy and GronskyÂ have noticed that popular artists these days aren't putting out records with truly meaningful lyrics.

"Our anthems have nothing to do with being better," ClardyÂ remarks, "Insteadand I have a line that says: 'Give them a couple chains and make them glisten,' knowing that the real mission is to keep the music out of its original intentions. It means we're distracted. [The music industry] says 'Here look over here! Look over here! This is what you want, [money] is what you want! Don't worry about that, don't worry about that â€¦ We'll give it a little bit we'll give it a little bit so that people that are listening to [the meaning in the lyrics] are happy and whateverâ€¦ but you are more distracted by this beautiful gold chain.You are more distracted by the fact that this is where you're going to make your money. This is what's hot right now so this is so you're going to keep listening to this we are going to put this on the radio. We're going to see that this is okay for you to listen to, not Kendrick Lamar'"

A seven-time Grammy Award-winning rap artist, Kendrick Lamar is something of an outlier in the industry insofar as he's never one to shy away from discussing political issues in his music. His music became more well-known after his 2014 album "To Pimp A Butterfly" dropped, and his popular song "Alright," of the same album, hit the airwaves. He performed at the 2016 Grammy awards, using the opportunity to address political issues of importance to the black community through his music for an audience of millions. Despite his many successes and widespread popularity with young audiences, you won't often see Kendrick Lamar's music on the Top 40.

Cooper has used music as a way to empower himself throughout his life. He's also, like the artists he's discussed, used music as a tool to bring people together to find common ground and make change.

"Music has always been therapeutic for me, in the sense that it has always kept me uplifted," Cooper says. "I'm working on a current project now called 'Blues for the Times,' where I'm actually looking at a lot of the things that are going on in society, and giving commentary on those things, but at the same time I'm thinking about how we might resolve that. I'm trying to bring resolution. I don't want to just kind of say 'Hey we have these problems and I'm angry.'"

"Music helps me to move past anger and start thinking about how we might start resolving these types of things and how we might speak to each other," he explains.

"I have a song called 'Now Let Us Reason,' and it talks aboutâ€¦ it's kind of like a dialogue between two people [who are] in different spaces. It's saying: "You don't know me, why don't you just talk to me, I'm not so bad my brother don't you see? Come close to me, Let Us Reason". So it's trying to find this dialogue, and it's dealing with the perceptions, the same song is dealing with the perceptions of what you might think of me, and what I might think of youâ€¦ and if we talked long enough we would realize that 'Well wait a minute you just don't know me! I'm really not that bad.'"

Dr. Cooper has some advice for those who would make music with a message of protest.

"I think the idea is study history to see what can we take away from that to make what we do today pertinent and profound and to effect change for what we're trying to deal with now. I think that's what artists need to do."

Clardy, GronskyÂ still attend Cooper'sÂ Soul Revue class at IU, and, along with Redding, continue perform together in a band called â€˜Huckleberry Funk.'

Despite the obstacles to widespread popularity that such artists asÂ Lamar face, ClardyÂ is anxious to follow in his footsteps. Â He continues to write music that, while fun, also discusses current issues.

He reflects on the kind of music that inspires him, and that he hopes to create. "It's a game-changer when you can go to the club and even though yes you're having a good time and yes you're dancing and stuffyou are listening to something that's provoking thought," ClardyÂ says. "You're listening to something that's telling you â€˜Yes, dance the pain away, but tomorrow we have to go out and fight.'"