George Walker: Playright R. Eric Thomas, Mrs. Harrison, directed by Rayanna Bibbs, who graduated from ISU back in 2015, and Elizabeth Brown, you’re our guest here, You are playing Aisha?

Elizabeth Brown: Yes, I am playing the role of Aisha. Ellie and I are really good friends and so we brought back that connection into the story. Because it all takes place in the room, so it’s sort of like, it’s sort of like this one room where you can’t escape. So they have to figure out. How, how the situation goes and how input, yah!

George: It’s about two women and one story, ten year college reunion,  Aisha and Holly meet by chance. Aisha is a black successful playwright, on the cover of the Alumni Magazine. Holly is white, struggling stand-up comedian.  She’s here for the free drinks. And they end up in a bathroom, which I believe has running water. Rayanna, how did you get involved?

Rayanna Bibbs: Last year ,I directed a show to showcase the  black students in the theatre department . So I was asked again to come back this year, to do the same thing. I decided to go with a show, smaller cast, Mrs. Harrison, so we have one black character and one white character.

Rayanna: Yes, (laugh) what attracted me to this play. Was these two characters. They seem very different, but similar in aspects. We have Aisha who is successful. She’s kind of winning right now. And, we have Holly, who is a struggling stand-up comedienne.  Both of these women happen to meet in this bathroom. The question is have they met before? Is this their first encounter? As the play progresses , They do end up ….in common. Aisha’s big play that  kind of rocketed her to stardom , if you will. Has very similar aspects to kind of an event that happened in Holly’s life, kind of revolves around who has the right to tell who’s story.

There’s always two sides to a story. We always think our story is the most valid , in the confrontation with another person, of course. In this instance, we’re hearing two sides, on stage, in this bathroom. And so, I thought that this was really fun and honestly the story. So, that’s what drew me to this particular play.

George:  Tell us a little bit about your character Aisha. It seems that you are successful, but maybe you’ve stolen the story? I’m not sure?

Elizabeth: Aisha is, like in the story very successful. She’s also very confident and a little bit self-involved.   So, when the topic of the story comes up. She’s not really sure where the story came up. She knows that this is the story that inspired her to write this successful play. And so, I think that very, and this is what she does is a success on the stage.

George: And how are you reacting with you’re dealing with Holly, who’s Elizabeth “Ellie” Graves? Do, you think that you’ve stolen her story?

Rayanna: We’ve gone back and forth about this.  Big pause…(chuckle) … that this story is something that happened to Holly. How much of it…we don’t see Mrs. Harrison on stage, we have no excerpts of it, WE know a general gist, a maid names Janey Jackson was Holly’s maid when she was a kid, and she died tragically. And we know that Aisha has a play where that happened . How much of it is Holly over exaggerating. And how much of it is Aisha stealing if you will? For Holly, it’s her story. She thinks that she has the agency that this is hers. Aisha has stolen something. So that’s the title of the play.

George: Mrs. Harrison , by R. Eric Thomas, directed by Rayanna Bibbs, stars a couple of undergraduates with Elizabeth Brown as Aisha and Elizabeth “Ellie” Graves as Holly. It plays on September 30th through October 3, Thursday through Saturday at 7:30 and Sunday af 3. 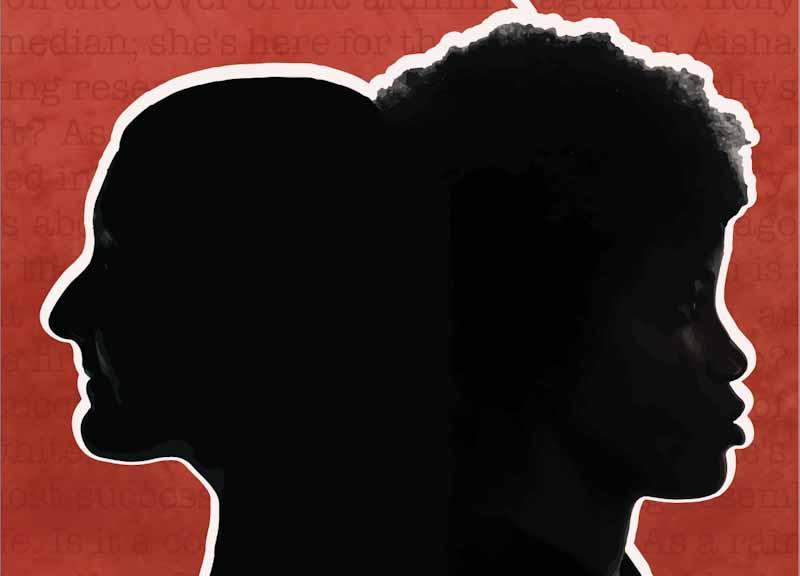 two women from the past (R. Eric Thomas)