Move Over Jimmy Stewart, It's 'Santa Conquers The Martians' 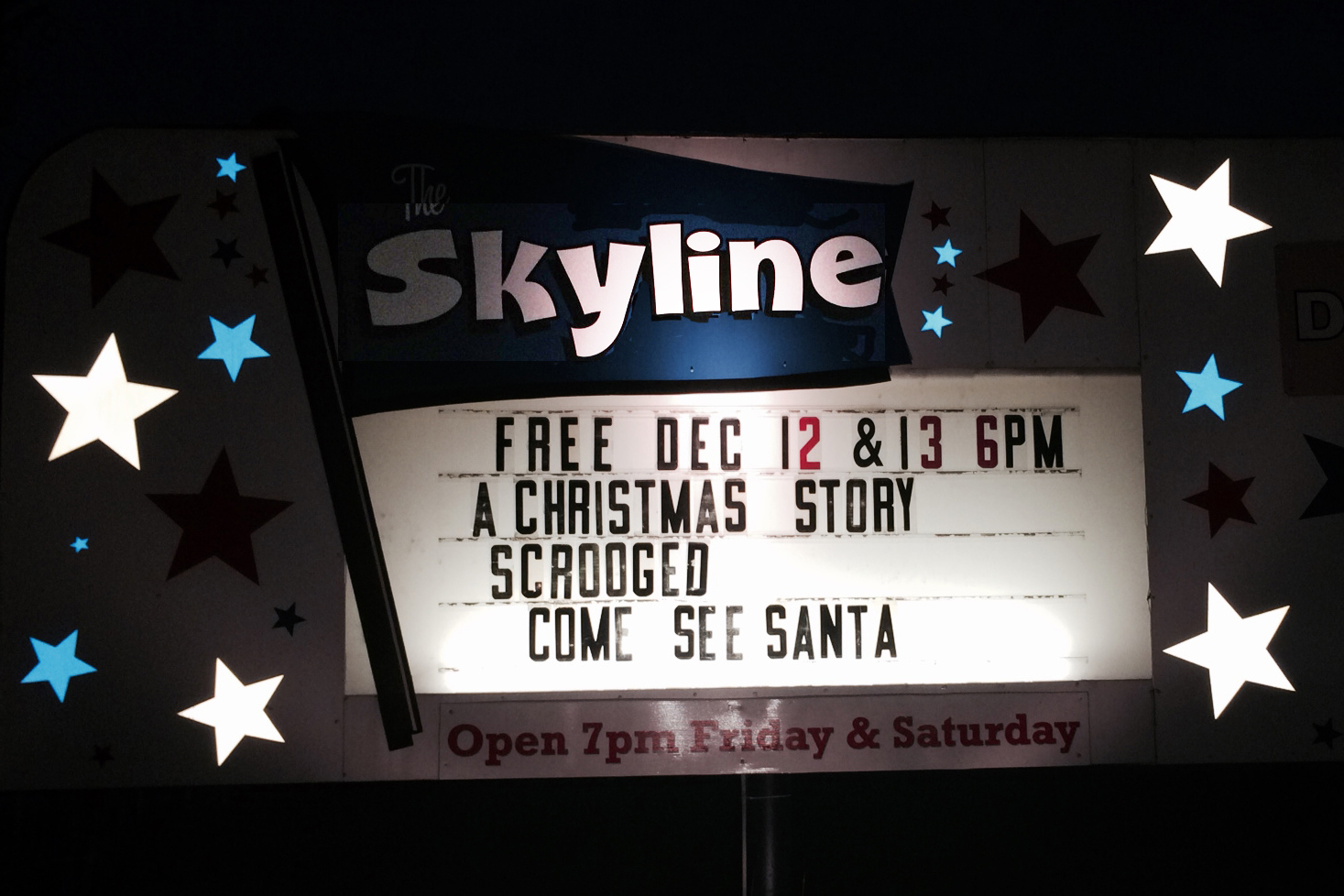 Drive-ins add a romantic glow to summer nights, while the Christmas holidays are best packaged in winter-white imagery.

Nevertheless, drive-in theaters and the Christmas season have this much in common: they both employ an equal mix of commerce and nostalgia to transport us away from our daily lives and draw us into their ritual festivities.

And the Skyline Drive-in in Shelbyville, Ind., is taking the comparison ever further with their yearly event "Christmas at the Skyline."

The Skyline stays open through mid-December and ends the season every year with a big holiday bash. Free to the public, "Christmas at the Skyline" offers an evening of holiday movies against a backdrop ofÂ stars.

Skyline co-owner Joe Goddin says the event is a way to give back to the community, and who doesn't love a good holiday movie?

Joe worked in independent film on the West Coast until he found out his hometown drive-in was up for sale. Since taking over the business in 2008, Joe and partner Matt Masters have been working tirelessly to revive the popularity of drive-ins.

"Drive-ins are a different beast than the multiplex. We've got one screen, so we've got to make it count," Matt says.

While Joe and Matt want to restore the Skyline to the drive-in glory days, they also want to take it in different directions and win over new audiences. Case in point, "Christmas at the Skyline."

"It's a process of reinvention. We're grabbing the nostalgia, but we're also asking ourselves, â€˜why can't we do this?' â€˜Why can't we stay open until December?' And some people tend to agree with us," Joe exalts.

Twenty-eight-year-old Shelbyville native Brandon Yates is a fan of the extended season and attends the Skyline every chance he gets.

"You can't go wrong with A Christmas Story and Scrooged, but I exclusively came tonight to see the later features, the B-grade movies they show at the Skyline: Santa Claus Conquers the Martians and TheÂ Magic Christmas Tree.

The Skyline's Christmas selections are representative of the theater's curatorial style: a blend of family flicks, cult classics and monsterÂ schlock. Joe and Matt strive toÂ balance nostalgia for the Norman Rockwell family drive-in with the lesser-known drive-in legacy of B-movies and grindhouse films.

"Drive-ins are a place where you can see stuff, number one, that can be watched by the family. And number two, that when it gets late you can go to the dark side. That's when the fun begins for us, because that's when we get to show the stuff we think should be seen."

The Skyline has a digital projector for newer releases, but often shows 16 and 35mm prints for its late-night screenings-billed Â asÂ theÂ Drive-Insanity feature-which are often movies that have never been released to video much less a digital format. The theaterÂ gets many of its retro films from Don Zest, a retired railroad worker and rareÂ film collector.

"I supply the weirdness. I've gotÂ a massive collection of drive-in type movies from '60s and '70s, and even some from the '50s. There's a tradition in drive-in culture of the dusk-til-dawn screenings of creature features where every title has the word blood in it. It's intense goofiness and it's extremely fun," Don boasts.

Though the family crowd cleared before Don screenedÂ A Magic Christmas Tree, he was glad to see "diehard movie buffs" stick it out.

The Skyline aims to prove it doesn't cost a lot of money to have a cinematic experience, says Joe, and it celebrates the campy subculture that sprung fromÂ low-budget movies.

"Sometimes those movies were really bad, but they're good-bad. And we want to preserve that drive-in culture."

The Skyline is now closed for the season, but will reopen in March with a full roster of movies, it promises, you won't find at theaters near you.