Miss Nelson is Missing...or Is She? 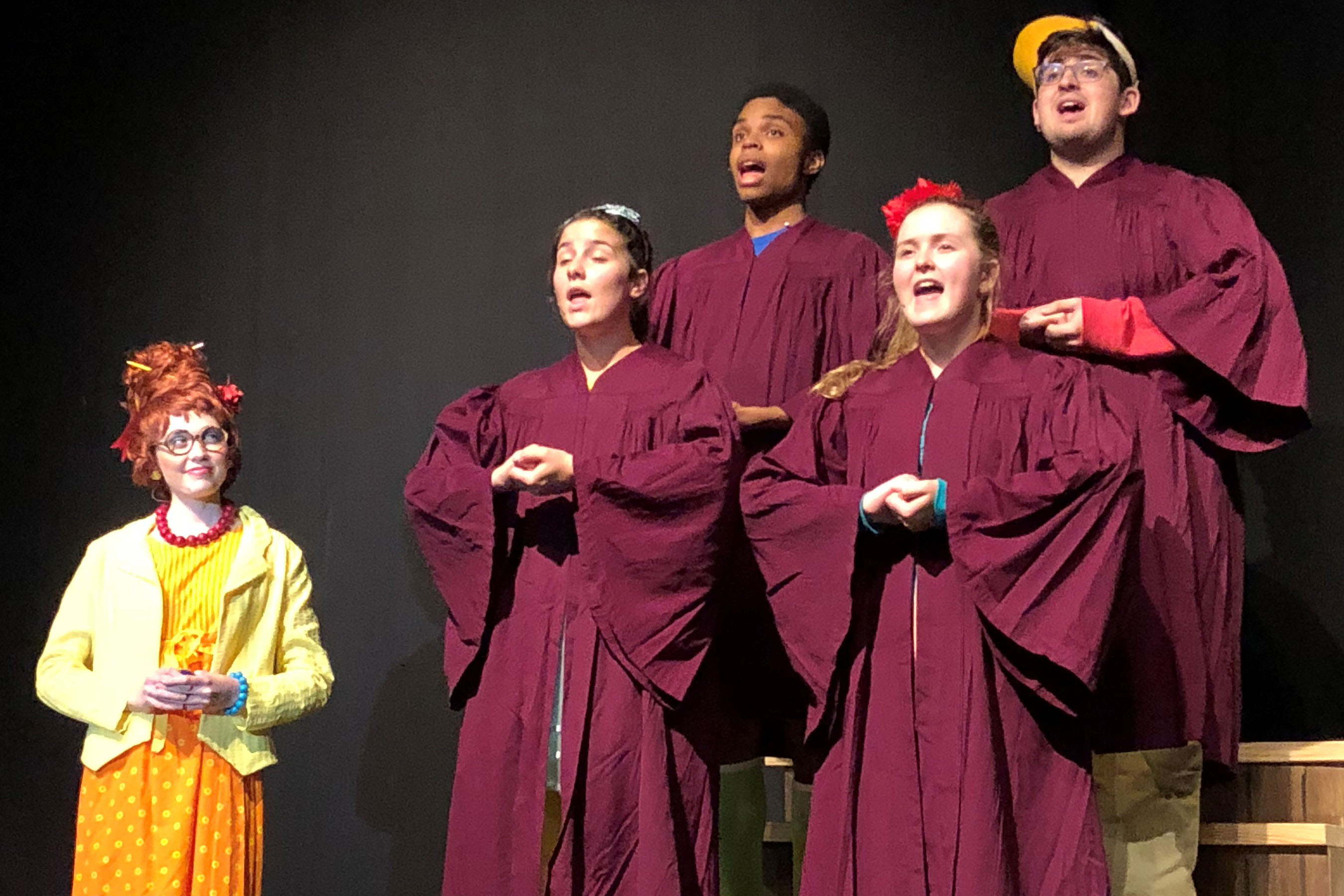 The Shawnee Theatre of Greene County offers the family and kid friendly Miss Nelson is Missing in their continually evolving theatre in Bloomfield…just off I-69. Joan Cushing’s award winning tale of fifth grade chaos is directed by Shawnee’s Bri Lindsey. It’s a fast paced musical with plenty of colorful action, an attractive dramatic and vocal cast. There’s a feel good plot and it all takes place in less than an hour!

Joelle Jackson stars as the class’s sunnily gentle Miss Nelson and her dark counterpart Miss Viola Swamp. Miss Nelson is thoroughly overwhelmed by a quartet of students that’s described as the worst fifth grade class in Horace B. Smedley Elementary School’s history.  A wonderfully operatic Rory Behrens is the school’s clueless principal and butterfly fanatic. It’s the principal who introduces the class to Miss Viola Swamp.

The ruler thumping task master Miss Swamp is everything that Miss Nelson wasn’t. Classroom regulations are enforced, misbehavior is punished, obscene amounts of homework are doled out.  Soon the shocked foursome of the class is begging for Miss Nelson’s return.

Magnus Kroken appears as a very musical detective with globe-trotting plots and plans. He leads the class through one possible scenario after another. Each seems to involve a distant continent, a frightening set of threats and some sort of complicated dance move. The students are all quite willing to go along with him and at the same time, do wish that the imaginative detective could remember Miss Nelson’s name.

The rambunctious students John Grace, Jr., Amanda Rooksberry, Jillian Chaney and Luke Donahue are all very much post elementary ages. But they do a fine job of recreating what may have been some of their own fifth grade rebellions. At the beginning of the show and at the end, they don choir robes and do a lovely job of part singing with the school’s anthem.

I’ve save one of my favorites characters for last. Poppy Hanse, the thoughtful school librarian played by Courtney Slough. She’ a wonderfully sympathetic figure and reference throughout the hour. It’s Poppy who shares Miss Nelson’s frustration, guardedly applauds Miss Swamp and always has warm feelings for that special time in the students’ lives as they pass through the elementary school on their way to middle school.

Shawnee’s production of Miss Nelson is Missing is designed by Jinquin He with lighting by Corbin Fritz. The music direction is by Brian Samarzea. Courtesy of sound designer Jade Lynch You’ll hear every note and  word on the theatre’s new speakers from those microphone that they’ve still had to  borrow from the high school. Zech Saenz is the costume designer.

Miss Nelson is Missing wraps up with evening performances Friday and Saturday June 28 and 29 and a matinee on Sunday the 30th.

Shawnee’s Season in Bloomfield continues with their regular Melodrama, the thriller Wait Until Dark and they’ll wrap things up with the hit musical Grease.