The Miracle Worker: A Story Well Worth Retelling 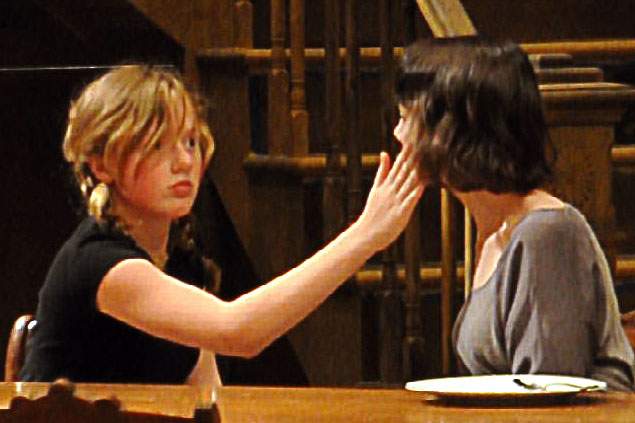 It's been fifty years since Patty Duke and Anne Bancroft battled it out on the screen as the deaf, dumb, blind Hellen Keller and her determined teacher Annie Sullivan in William Gibson's The Miracle Worker. It's a famous story and during the intermission before the third act people around me at the IU Festival production  were whispering about the famous finale. They were even repeating the word "wa-wa,"  Helen's triumphant connection of a  handspelled word with the real thing.

This didn't diminish the wonderful tension of the final scenes, Hillary Clemens dogged frustration as Annie Sullivan, the frightened anger of Lola Kennedy as Helen and the wonder of the moment of tear filled joy in the magical connection at the pump. The thoroughly moved audience gave the actors a standing ovation.

Hillary Clemens was a delight as Annie Sullivan the small, determined teacher sent south from Boston by a somewhat reluctant Ian Martin as the head of the school for the blind. The production's Helen, Lola Kennedy was simply amazing. Her spirit, her anger, her own frustration and occasional joy were wonderfully transparent. Never for a moment did you think that she could see or hear.

Helen's father  David Kortemeier was very much the bluff southern gentleman who has real reservations about this Yankee teacher. Jenny McKnight was ever Helen's over loving mother, frequently in conflict with the stern Annie. Adam St. John as the family n'er  do well  son offered an outsider's view and an occasional ally for Annie.

The Festival Theatre has lavished attention on The Miracle Worker. Direction is by Dale McFadden with help from Rob Johansen trying to keep the bumps and bruises for Annie and Helen down to a minimum as fight coordinator. Linda Pisano has the gentlemen in richly detailed three piece suits and the somewhat more simply dressed woman in outfits that look just right. Reuben Lucas has a neatly designed set dominated by brown tones with stenciled flowers breaking up the texture and the famous water pump waiting close to the audience at the stage's edge.

The IU Festival Theatre's production of The Miracle Worker continues with evening performances and matinees in repertoire with Shakespeare's comedy Twelfth Night through July 27th. If you don't come to the show, you'll have to put up with friends who do telling you that they're sorry you missed it in the months and perhaps years to come.