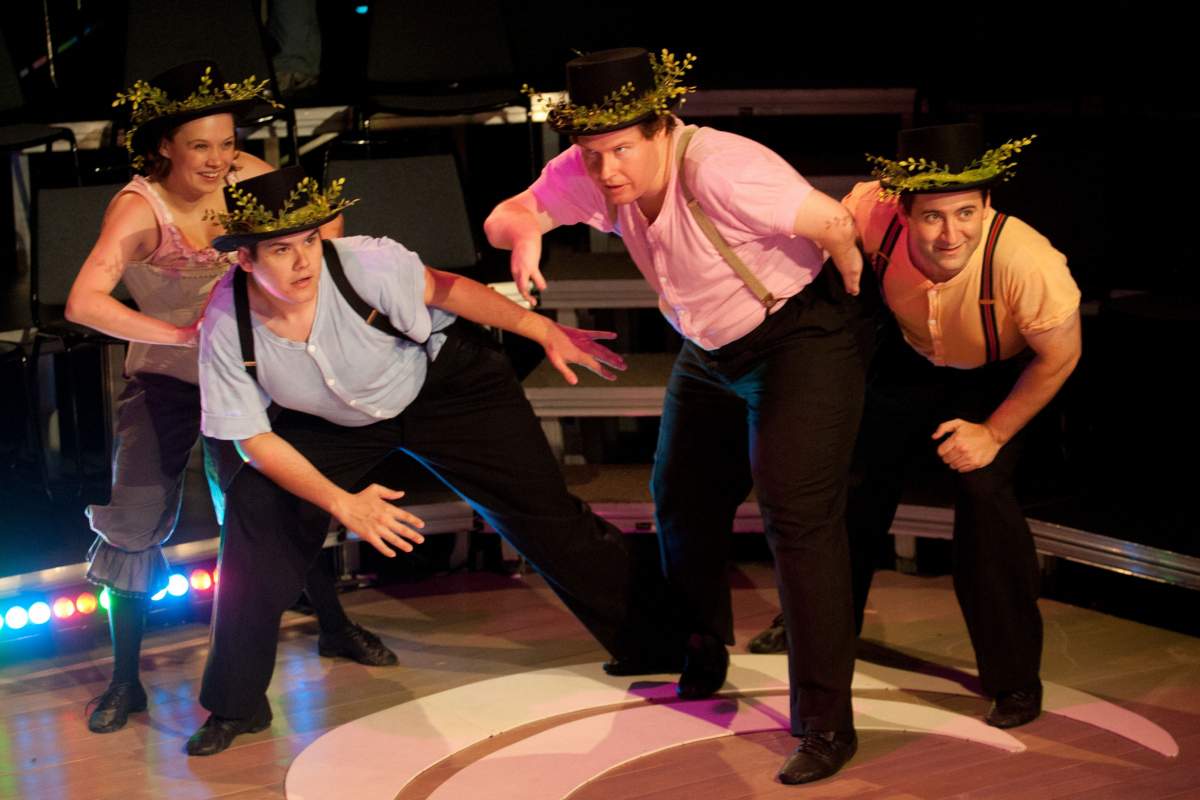 Crossroads Repertory Theatre's Chris Berchild has taken Shakespeare's A Midsummer Night's Dream out of the court and woods around Athens in ancient times to the streets and parks of Paris in the 1870s. Berchild delights in what he calls "chamber productions." True each of his seven actors does play at least three parts, but the energetic play itself is a wide ranging effort that at times simply sprawls across and stage and up into the audience.

The four lovers: Demetrius, Lysander, Helena and Hermia, who get so embroiled in deliciously ironic romantic complications, also play roles as the "rude mechanicals." They're the locals who put on the "very tragic comedy" of Pyramus and Thisbe.

Joe Wagner who was appropriately wimpy as Demetrius, Hermia's father's favorite was later quite charming as Pyramus and Thisbe's moonlight. Brandon Wentz had made a more determined lover as a Lysander and then was quite funny as a hesitant Thisbe.

Carolyn Conover's Helena was at her best in her rage when all the boys were after her, but she thought they are mocking. She was quite funny as a clueless lion in P and T. Jacqueline Wentz was a feisty figure in her refusal to wed her father's choice and in her dual with Conover.  Later, she was the most delightful wall for P and T.

Rounding out the cast for Pyramus and Thisbe were Julie Dixon as an ever agreeable Prologue and Ryan Niemiller as the energetic and creative Bottom. Not to be left out of the full septet of actors, Jason Bowen neatly handled a cute dog puppet.

A unique feature of the Crossroads production is the casting of Puck. He's the fellow whose mistaken administration of a love potion causes at least a good part of the problems for the lovers. Puck was played by five actors. Sometimes there was just one, but mostly there were groups of Pucks. In the longer speeches they tossed phrases back and forth. Mostly this worked very. It was nice to have a chorus of Pucks. Occasionally I wished for a single voice.

Director Chris Berchild's setting of A Midsummer Night's Dream in the Paris of the 1870s with each actor playing multiple roles led costume designer Marc Borders to a look closer to a rough Moulin Rouge rather than an upscale Folies Bergere. Clever costuming helped greatly in keeping roles clear. Likewise it led sound designer Michael Jackson to lean on creative performances of period composers like Offenbach for the music. Naturally, a leg kicking "Can, Can" for the whole company was part of the series of finales.