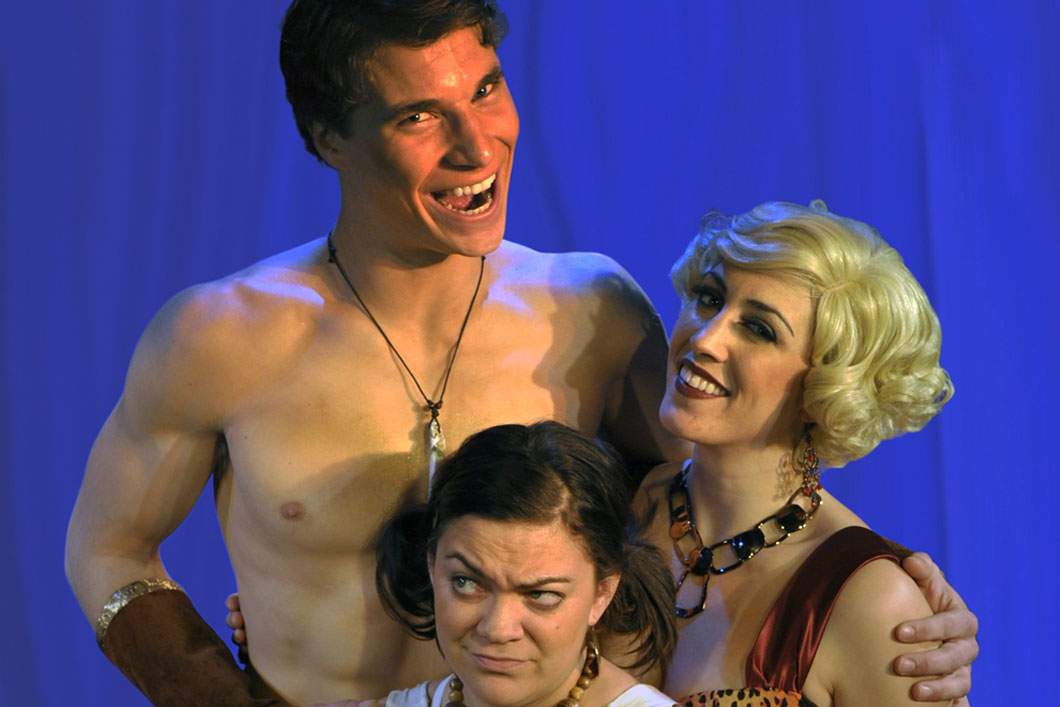 As the audience files in for A Midsummer Night's Dream at the Lee Norvelle Theatre and Drama Center the stage is already buzzing with activity. Various characters are apparently busying themselves around what seems to be a Hollywood set circa 1934. After a while there's a voice with the usual preshow reminders and the group for the first of A Midsummer Night's Dream's stories arrive.

Studio head Theseus, the upright Aaron Densley laments that he has to wait four days for his wedding to former Queen of the Amazons, Hippolyta, the confident Allison Hillman. Thomas Oldham, as the whiney Egeus arrives with a problem. His daughter Hermia, beauty queen Brianna McClellan, is refusing to marry his choice for her, Demetrius, the toadying Thomas Crosby Beaver. She prefers Lysander, the poetic John Machesky, and hints that Demetrius has a prior attachment to Helena, the majorly frustrated Chloe Williamson. Studio head Theseus, with perhaps more power that studio heads usually could muster offers Hermia the choices of marrying her father's favorite, entering a nunnery or being put to death.

Got it? If not, don't worry this is a Shakespearean comedy and everything that I just told you will get even more mixed up and then work out fine in the end.

Story number two is the much looked for arrival of those actors who were pretending to be tech guys during the preshow. They appear as the "rude mechanicals" to prepare for the comical tragedy of Pyramus and Thisbe. Andrew Benowich was a perfectly over-the-top Bottom as the energetic fellow who would and could play all the parts, but must settle for Pyramus. As we see later, Nat Zegree makes a very fetching Thisbee. Jack Goldberg will affectingly represent the wall that separates the lovers and allows their confidences through a somewhat novel path. Kristl Densley as Patty Quince was their much put upon, but patient director. In the midst of the gathering, Puck, a sometimes grumpy but always comical Nicole Bruce, puts an asses head on Bottom's shoulders and the players scatter.

For story three, Oberon, the King of the Fairies, arrives dressed as Tarzan, the King of the Jungle. Mike Dits came in swinging in on a rope. He didn't utter the traditional Tarzan yodel, but displayed a winning smile and a dynamite set of washboard abs. Shortly thereafter the daunting Titania, Evelyn Gaynor, arrived complete with her troupe of tap dancing fairies choreographed by Carrie VanDoren. After the two traded insults for a while a separation was affected.

It's at this point that Puck with the love juice gets into the act. She mixes up the young lovers leaving an abandoned Hermia, clutching onto Lysander as both he and Demetrius pursue a frightened Helena. This scene actually gets a bit messy and a fair amount of dialog is lost. But it's very much supported by the intricate fight choreography of Adam Noble and the clever breakaway costumes of Jason Orlenko. As I said earlier, despite what certainly appear to be irreparable words and actions, we knew that it would all work out in the end.

Puck does get the love juice in the right place to humiliate Queen Titania. Andrew Benowich was a charming dancing ass and Evelyn Gaynor was thoroughly smitten.

It was at this point that everyone got a good night's sleep. Oberon and Titania were back together and the right pairing of the young lovers had been affected. All that was left to wrap up the very successful foray into the woods of A Midsummer Night's Dream was a very funny and creative performance of Pyramus and Thisbe, a winsome speech by Puck and a standing ovation for the production and the cast.