It's Not Bossy To Be In Charge "Behind The Lens" 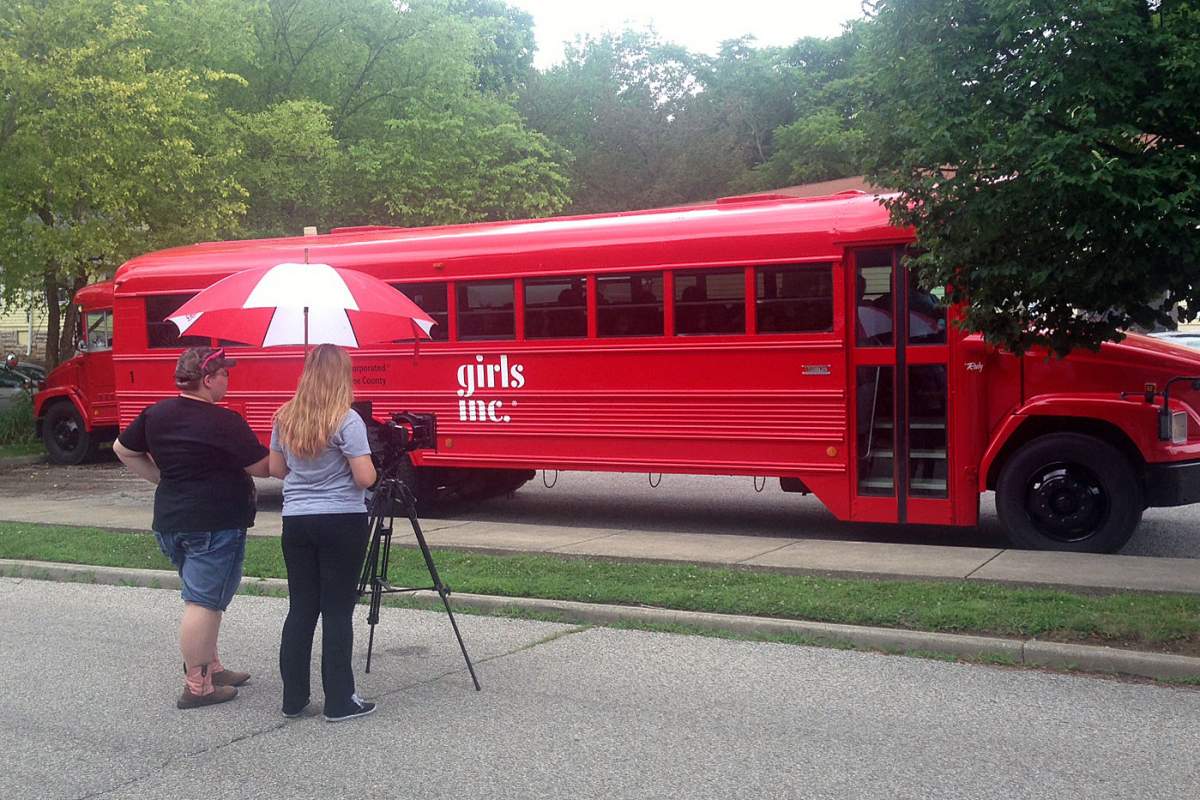 "I had this project for a class where we were supposed to make a kind of spooky'ish movie, so I went home and started working on the script," she says.

She worked with three classmates on the short film. They called it The Ghost Of Elm Heights. They used Harmony School as the set. They all picked out their own costumes and played all three roles in the movie.

"My friend Cassie, she was the one who did the big scream. She's the one who had to work on her lines the most because she's the main character."

Maddie also made a lot of the directorial decisions. For instance, to end the movie, she shot a scene that involved a lot of fake blood. "But I looked at the scene and I was like, It looks way too violent. I don't want that," she says.

So instead, it ends simply, with the main character fading into the background of the school hallway.

Maddie showed The Ghost Of Elm Heights to her mother, Jessica Levandoski, who then showed it to Maddie's volleyball team at Girls Inc. She brought the movie up on her phone. "And they all stood around and said, â€˜Ooh, I want to make a movie!' It was a moment when I thought, â€˜There's something here.'"

Levandoski is also a filmmaker, and she's almost as new to it as Maddie is. Three years ago, she spent the day on a filmÂ set. After seeing so many things go wrong that day, she decided to teach herself how to make movies. Lesson number one involved googling terminology.

"What is a Best Boy Grip? That's a guy who wrangles cords, guy or girl. If she's a girl, it's still called Best Boy Grip."

Fast-forward to today and she works in film fulltime. She and her husband Matthew Levandoski run Bloomington-based Brave New Productions. She also co-founded the Middle Coast Film Festival, which will be in its second season this August.

She says it never occurred to her to pursue filmmaking when she was growing up in the '80s. Seeing how eager these girls were to express themselves on film led her to start her latest project a moviemaking summer camp for girls. Over five days, the campers will create a shortÂ film to commemorate the 40th anniversary of Girls Inc.Â of Monroe County. Each camper will be given a job behind the scenes from cinematographer to best boy grip. It's no coincidence that the camp is called Behind The Lens.

Both SandersÂ and Levandoski are accustomed to running the show in their professional lives. They say it's important to give girls positive associations with being in charge.

"So often if you're a leader as a young girl, you're bossy, and I think that's terrible because a film director is the boss," says Levandoski.

Kristi McCann is the executive director of Girls Inc. of Monroe County. She says setting the camp in an all-girl environment is important. "It gives them the confidence to state their voice, to try new things. Without the societal impressions that are given to girls very young.

It also teaches collaboration, which Levandoski and Sanders say has been key to the success of all their projects.

The movie will play at the Middle Coast Film Festival Saturday morning, alongside other female-led films. Each girl and her title will be featured in the credits. Levandoski says it's important for their parents to see that, to see that filmmaking is a valid occupation. And perhaps it's something the girls will choose to pursue.

"We've been using the word accessibility a lot. It creates access," she says. "Whether or not they like it or not, it's another option."

Maddie will be participating in the camp as well. At the end of the week, she'll have three films under her belt before she becomes a teenager. She's written scripts, she's done some acting, but the position she relishes the most is behind the lens.

"Directing it was the part that stood out the most to me. It was awesome, it was pretty inspiring," she says.