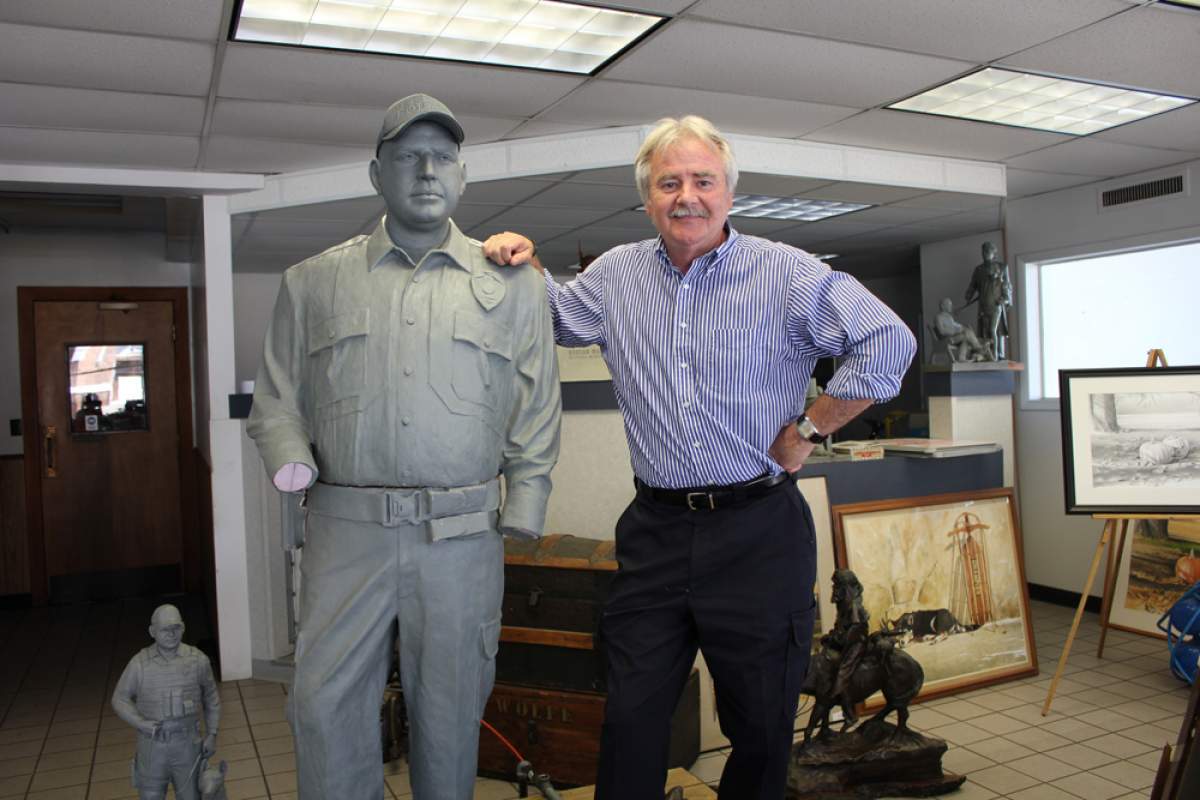 The Terre Haute Police Department is working to preserve the memory of Officer Brent Long, who was killed last summer while serving a warrant.

The department is working with Terre Haute sculptor Bill Wolfe to create a life-size bronze statue of Long and his canine, Shadow, which survived the incident.

When making the sculpture, Wolfe focused on the man Long was, and what the statue would represent to people far into the future.

"He was a country boy just like me," Wolfe says.

The Artist For The Job

It's apparent he's not used to all the space, because he's crammed most of his clay and bronze models into one corner, leaving the entire showroom floor empty.

"The studio I had there wasn't enough room for someone who paints and does sculptures. It just wasn't enough space...It's been rough getting used to it," Wolfe says.

He's a humble, quiet person, but a prolific artist who loves to show off his work. Wolfe has several projects in the works-including a series of four murals for the Vigo Country courthouse and a fifteen-foot tall statue of Larry Bird.

But the work closest to completion is the memorial statue of Terre Haute police officer Brent Long and his dog, Shadow.

"It is an emotional thing, because we lost one of our officers that are hired to protect us, and it means a lot to me also, because my son is a police officer," Wolfe says.

Creating this sculpture meant Wolfe had to think carefully about how to depict Long. He didn't want the memorial to look like other bronze statues, which depict soldiers as battle heroes but give no hint as to who they were as people.

He wanted Long to appear as a heroic everyman. Someone you could relate to.

"You want him to have a hero's stance. A hero's stance I say, but I want to get that personal look too. He's a little relaxed in his post. And the dog Shadow will be at attention," he says.

Wolfe originally wanted to depict the dog looking up at Long to show their special bond, but Long's wife nixed the idea, saying the respectful way to show the dog was at attention, the way he was trained.

"He was a really good guy," says Dan Armentrout, a friend of Long's and also an officer with the Terre Haute police force. He spearheaded the effort to raise money for a memorial to Long.

His initial idea was to install a plaque, but that plan was scrapped when the police department raised enough money to commission the life-size statue. After working with Wolfe and Long's wife Danielle throughout the process, Armentrout says it's a good representation.

"He was down to earth, laid back, and a good police officer on the streets as well. He's a very trustworthy and loyal friend, there's not too many guys like him," Armentrout says.

Armentrout has worked with Wolfe and Long's wife Danielle throughout the process. Wolfe says he hopes Long's memorial will stand the test of time.

"This is something that's going to be around for a thousand years; you want to do a good job," Wolfe says.

The statue of Long will eventually be installed on the grounds of the Terre Haute Police Station, but no date has been set.