At Meadowood, You’re Never Too Old to Sing 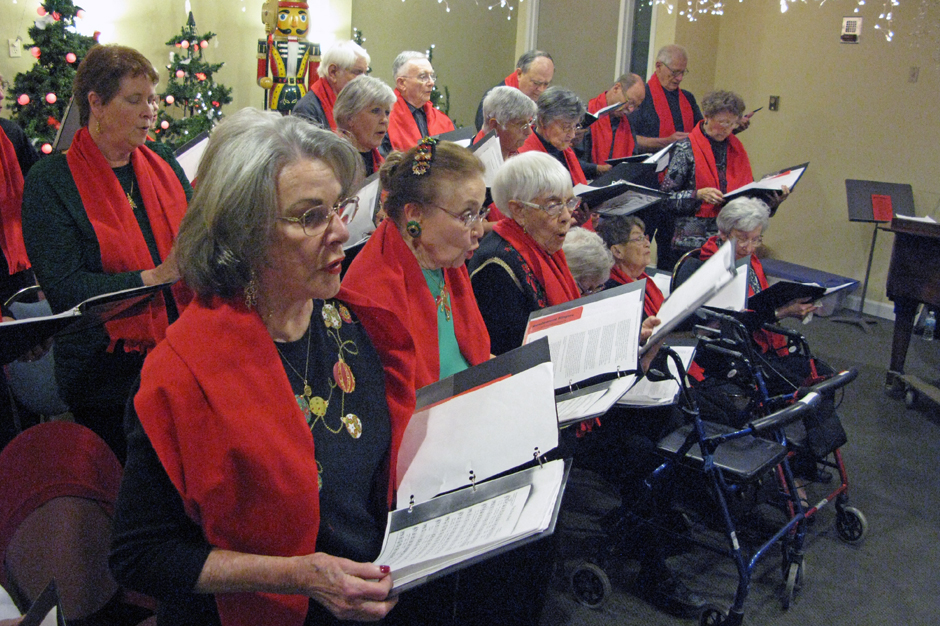 In a sunny all-purpose room at the Meadowood retirement community, Tim Reed leads the Meadowood Singers in their last rehearsal before their annual Christmas concert.

"All right, so let's start with a little bit of a physical warm-up," says Reed, addressing the group of twenty-five Meadowood residents. "Go ahead and stand up, those of you who can."

Most of the singers rise, while a few sit behind wheeled walkers, and one sits in her wheelchair. The chorus is made up almost exclusively of Meadowood residents. The only requirement for membership is a desire to sing.

At 51, Reed is the youngest person in the room. After leading the group through bodily and vocal warm-ups, he sits at an upright piano and takes the singers through the concert program.

The singers have been rehearsing for five weeks, but when they rehearse "Sleigh Ride" some bugs become evident.

"A couple holes in there," Reed chides. "Let's work on the ending first."

He takes them through the song again, but the singers neglect to repeat "giddyup" at the end.

"What happened to those giddyups?" he asks, then laughs, unfazed.

'It makes us happy'

After the rehearsal, Ann Morley was unconcerned about the problems that surfaced. Perhaps her experience singing in a chorus on Cape Cod for thirty-five years has given her perspective.

"Sometimes when you have a bad dress rehearsal," she ventured, "you end up with a terrific first performance."

Jeanne Turner noted that for past concerts the singers were better prepared, but she was optimistic about tomorrow's performance.

"We usually shine," she said, laughing. "We usually catch up and do well, at the end. When all the coins are on the table, we do a good job."

Marlene Emery is the one chorus member who no longer lives at Meadowood, but was invited back to sing.

"It's a little harder to hit those high notes now," she said.

I asked her what she gets out of singing in the chorus.

"I just love to sing with everyone," she told me. "We have so much fun, and we just love to try to make other people happy. And it makes us happy."

But for the Choir

Dick Schutte, who sings bass along with the handful of other men in the chorus, revived the group a few years ago after it had disbanded. He recalled the time when a daughter of a chorus member sought him out to express her gratitude for bringing the chorus back.

"She said, â€˜Thank you so much for setting up the choir. My mother loves to sing.'"

"Many of the singers," Schutte believes, "would never start singing if it weren't for this choir."

Chorus director Reed, an IU music school alumnus who also writes and composes his own music, feels the rehearsal went well today despite the bumps.

"When you're in your eighties and nineties, as most of the singers are, your mind comes and goes. You have better days than other days. So you have to take that into account."

The next evening in Meadowood's Terrace Room, it's about forty-five minutes before the concert is to begin. The singers are taking their places, sopranos in front, altos and tenors behind them, basses in back.

Most of the singers are dressed in black, a few in green, and each wears a crimson scarf. Above them white Christmas tree lights dangle from the ceiling like snow, and behind them stands a bank of Christmas trees and an enormous toy soldier.

Tim Reed, looking dapper in a black tuxedo, sits at a grand piano leading the chorus through last-minute warm-ups.

After the warm-ups, soprano Annette Keefe tells me that she sang professionally most of her life.

"Of course, now at my age, I've lost a few notes," she says with a chuckle. "But I'm still singing."

"I sang at the White House when Eisenhower was president. That was a thrill."

It All Comes Together

At 7 p.m., audience members fill every seat, as well as the extra chairs that spill out into the lobby.

At yesterday's rehearsal, "Sleigh Ride" was one of the songs the singers stumbled over. Tonight, it all comes together, including the "giddyups."

The concert included twelve audience members coming up in front to sing-and act out-the various parts for "The Twelve Days of Christmas." There were also solo performances by two of Reed's voice students, 13-year-old Jenni Miller, and 17-year-old Jessica True, who this summer is being sponsored by Rotary to study opera abroad. The hour-long concert ended with the audience joining in for "Silent Night."

"Just the camaraderie of getting together and using your brain to read the music," he feels, is beneficial for the residents.

"And just the physical actof singing, I think is a very healthy thing for anybody," he adds. But it's particularly healthy when you're their age."

The joy of singing, he believes, combined with the physical act of singing, is a combination that creates "vibrations in your body that help keep it alive."

Perhaps his claim was borne out by the experience of past chorus member Millie Yoder. She sang with the Meadowood Singers until she was 100.