Maureen Forman: Drawing More Closely To A Sense of Herself 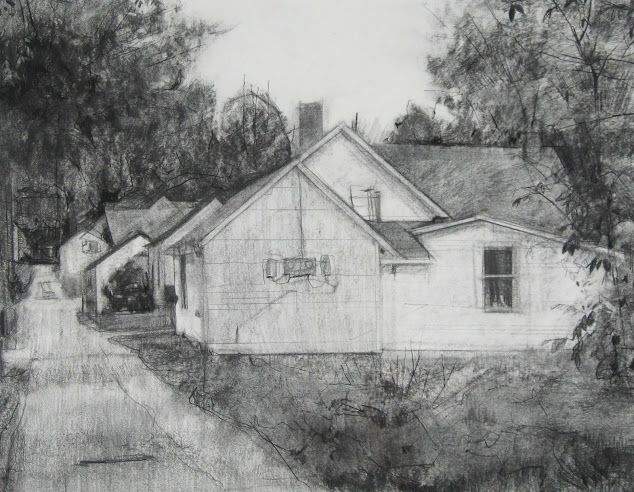 "Art," said Pablo Picasso, "brushes away from the soul the dust of everyday life."

"There are so many things we have to do during the day that are required" she posits. "This is going to make me sound like such a slob, but even taking a shower! Cutting the bagel. Putting the cream cheese on. Just things you have to do as a civilized adult."

Making art, FormanÂ finds, can be a reprieve-

I think that there's a reward to practicing any kind of art form.

"It's such a break from that when you can sit down and...Â if you want to draw aÂ face as a series of scribbles that looks like nonsense, go for it! Who cares?"

Sketching Her Way Back

Forman's masterful drawings look no more like scribbles than she looks like a slob, but self- deprecation seems to be a part of her process. Having drawn and painted all her life-with her mother, who's an artist, and as an undergrad at the Maryland Institute College of Art-she came to a sudden roadblock after finishing her MFA at Indiana University.

"I've always been a really good student," she elaborates, "and I've always been really charged by the feedback I've gotten from my professors, so when all of that was taken away, when it was just my voice pushing me forward, the doubt that I had kind of overwhelmed me. I didn't know how to navigate the ship anymore."

So she gave herself permission not to make art.

When I'm not really allowing myself to look, it depletes me in some way. So when I sit down to draw, I can finally just be who I am.

"I told myself I was free; I could do other things," Forman recalls. Â "And I did try other things. But I never stopped drawing in my sketchbook. Sketching allowed me to be very relaxed, because no one was watching and no one was going to see them. Â And I was also using pen that I would find, like, in my purse, and I had to be comfortable with not being able to erase."

There was something about opening her sketchbook and drawing her surroundings using any available implement that was private and casual enough to keep the doubt at bay.

"And I got to the point where I was drawing so much in my sketchbook that I thought, why don't I just make this a little more serious? I mean, you're doing it, like four or five times a day! So just do it! Stop being so scared!

An opportunity arose for Forman to test her bravery.

"A friend of mine asked me if I wanted to show some work at the Rainbow Bakery, and I thought the only thing that really would fit there were these sketches. So I ended up showing all of these sketches [from my period of]Â hiding."

Forman ripped the pages out of her sketchbook and tacked them to the wall of the cafÃ©. Â A few people bought them, which surprised her. Â "I just never expected to show them to anybody," she shrugs. "They're justmy boyfriend lying on the couch, the cat asleep on a chair, stuff like that."

But it was her unselfconscious drawings of those very everyday subjects that brought Forman back. Which is maybe why we see so much everyday life in her more ambitious drawings, some of which represent straightforward landscapes and interiors, while others juxtapose discretely observed elements within a single, collage-like space.

WithÂ the more committed work, Forman explains, "I wanted to try and access that same kind of relaxed feel that I would have when I was sketching on my own, just responding to my own environment, in my apartment, and being relaxed with the medium."

Brushing Away The Dust

Working with visual information that is readily familiar allows Forman to get to what she calls a "safety zone," in which she can findÂ and express her own voice. In this way, even the most mundane objects from everyday life become a vehicle for self-discovery.

"I live across the street from the restaurantÂ Juannita'sand I'll notice, at a certain time of day, the light hits the yellow building and makes the yellow just glow and makes the shadow of the tree hit it just right and I'll see it over a few days, and I just get to this point where I say, 'Fine I'll draw you!' I kind of get haunted by these beautiful moments."

I notice the worshipful quality that FormanÂ invokes when she describes the dance of light acrossÂ the unprepossessing cinder block building the restaurant occupies. You'd think she was describing a villa.Â "Yeah," she acknowledges,

Â I think that there's a reward to practicing any kind of art form. I also take ballet. And I find that when I'm not dancing I move differently during the day. When I am dancing, I reach for the coffee cup with a little bit of a lunge. And the same is true for drawing and painting. When you're painting a lot, you see colors that you hadn't seen before. When you're drawing a lot, you see tones and values in the world that other people are walking right by. It's just a little gift to you for practicing this art form.

When I'm drawing I'm allowed to really look at things the way I'm programmed to look at things. Really look at the tiny little details. But when you're trying to go buy cereal at Kroger, that's just too overwhelming and it's going to take you three hoursso you just get in and out. But I think when I'm not really allowing myself to look, it depletes me in some way. So when I sit down to draw, I can finally just be who I am.