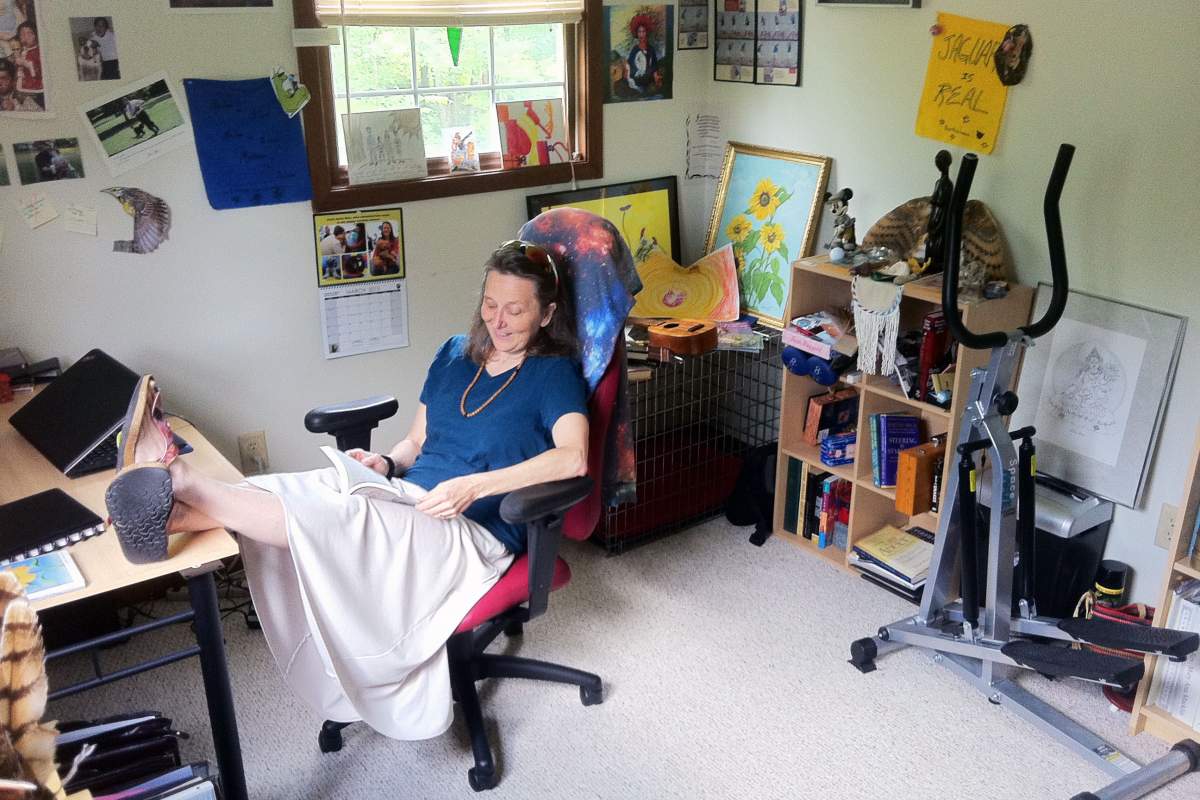 Mary Ann Macklin has always loved sports. She would have loved to have been a 3-sport athlete at Belmont High School in the â€˜70s, but she just stuck with volleyball and basketball.

Basketball was more my love, but football was my true love. And I didn't have the chutzpah at that time in my life to try out for the football team. I could have made it, I'm very sure of that. I know I'm small, but I would have loved to have played linebacker, but I would have had to bulk up a little.

She's now the senior ministerÂ Unitarian Universalist Church in Bloomington, a job that requires more reading and writing than jump shots and tackles. All the books she reads end up informing her work in one way or another. The book she picked up this summer wasn't for a sermon but for research for her novel. It's the memoirs of Debbie Millbern Powers, called Meeting Her Match. Right off the bat, she found a personal connection to the story.

"It happened to me so many times, being a young girl in sports, and knowing I was not going to be able to play professionally," she says. "I don't know how many times I heard, â€˜Well you can be a cheerleader,' and she has that happen over and over to her as well."

I took the ball, thanked him, and ran back home, wondering who the Springfield Sallies were. I'd never heard of girls playing professional baseball. Hm, maybe I could do that someday, I thought.

Nevertheless, "She said when she came back not too long ago, they were honoring the athletes, and somebody walked up to her and said, â€˜Oh, were you a cheerleader here?' She goes, â€˜Yeah, still happening.'"

The working title for Macklin's book is Butterfinger Zero. It's a fictional re-imagining of a real event the 1975 Indiana high school volleyball championships. Macklin was there in the audience. Millbern Powers was one of the coaches. But more about that in a second.

Macklin flips to the beginning of Meeting Her Match. This passage could have been pulled from her early life, she says.

"What happens is she finds a group of boys who are playing baseball, and she does the proverbial hits-the-ball-breaks-the-window, and has to go tell the person once they get back:"

"Hi, I'm Debbie," I said, as I thrust my hand forward to shake his. "We just moved in across the street." When he didn't extend his hand to me, I pulled my back and stuck it deep into my pocket. I continue speaking as fast as I could, hoping that my words would somehow evaporate into the air without him hearing them. "This afternoon I was playing baseball with some boys in the lot next to your house, and I hit a baseball over your fence and broke one of your windows. I'm so sorry about it and plan to pay for it. Will $5 a week work for you?"

Out of breath, I paused while studying his reaction. He placed his hands on his hips and stared at me saying nothing for what seemed like an eternity. I felt like I was either going to throw-up or pee right on the front step.

Finally he spoke, â€˜Well, Debbie. I hadn't even noticed the window. I just got home from work." He spoke softly with no emotion of anger or excitement. He disappeared into the house for a few moments and returned with the baseball in his hand. "This must be yours," he said, and cupped the ball in his hand. "That must have been quite a hit. Was it a fastball or a curve ball?" Startled by his question, I hesitated and answered, "It was a fastball, right down the middle." "Good for you," he replied. "You know what, my sister played professional baseball for the Springfield Sallies in the 1940s. I don't know if she could have hit a ball that far when she was your age."

He smiled and I felt a sudden wave of relief. "Here's your ball back, and don't worry about the window." I took the ball, thanked him, and ran back home, wondering who the Springfield Sallies were. I'd never heard of girls playing professional baseball. Hm, maybe I could do that someday, I thought.

A friend gave Macklin Meeting Her Match as she was putting the finishing touches on the second draft of Butterfinger Zero. Both books reference that volleyball championship in 1975. Here's what was happening in Indiana in the 1970s leading up to that gameâ€¦

Title IX passed in â€˜72. Macklin was in high school as the rules were being implemented and Millbern Powers was a coach of various high school girls' teams. Macklin remembers that at her school, there was no girls' golf team, so one of her classmates played on the boys' team.

Then what happened in Indiana and South Bend was a place where this happened boys started going out for the volleyball teams, and this caused a great turmoil," she remembers. Debbie Millburn-Powers was the coach of the all-girls volleyball team that played in the state championship against the team with two boys on the roster.

"I attended that game," says Macklin. "What struck me so much is that sports was such a haven for me, and I don't think I'd experienced hate and viciousness with all the people outside, particularly with gender issues. It was awful." Issues that any sports fan knows we are still grappling with today.

"And I think that's why I'm writing this story," she adds. "I just wanted to go deeper into it."