The IU Opera and Ballet Theater opens their fall season with a production of Mozart and Schikaneder’s The Magic Flute. It’s sung in German with English supertitle and the cast does speak in English during the dialog. It’s a singspiel so there are plenty of times when the cast does let us in on what’s happening. Saturday night I elected to stay at home and was treated to the video magic of close ups and wide shots.

There are more performances this Friday and Saturday in the Musical Arts Center and of course on line.

The Magic Flute is a classic tale of the struggle between good and evil and logic versus emotions. It’s represented by the august low note presence of  the High Priest Sarastro, Noah Lauer and the motherly Queen of the Night,  the high note specialist Maggie Kennebrew . The audience and the orchestra, directed by the masked Arthur Fagen was masked both in the house and in the pit. Michael Shell is the stage director

The opera begins with an overture and then there’s the dragon, who frightens our hero, Tamino, Gavin Hughes.  The dragon is  dispatched by the Queen’s ladies:  Melinda Wagstaff, Lindsy Webber and Arienne Fort Connack. Pagano, our  beloved bird catcher Anthony Jesop attempts to take credit for the deed, but quickly is prevented from lying. When the ladies show Tamino, Pamino’s, Sarah Rachel Bacani,  picture he immediately falls in love. The motherly Queen of the Night appears and she promises that Pamina will be his, if he rescues her from the evil Sarastro. The Queen’s Ladies give Tamino a magic flute and Pagano a set of bells. Led  by the Spirits , Alexandra Branton, Caroline Goodwin and Evri Bailey with a crazy set up of wheels and bicycle tires they depart.

Meanwhile…Papagena,  Brianna Murray, disguised as an old woman is attempting to tempt Papagano from his dinner. Tamino discovers that Sarastro if not the evil man whom the Queen of the Night described but the high priest who is protecting Pamine from her mother. At the same time, the evil servant Monostatos, Lucas Newman-Johnson captures Pamina and Papagano. Monostatos is faulted for his presumption…seventy-seven lashed to the bottoms of his feet, but whose counting. Tamino agrees to undergo a set of trails and the act ends.

Twenty minutes later, the audience re-assembles and it’s on to the second act.

Sarastro meets with the order, all masked by the way, in a secret meeting room in the temple. Here he instructs Tamino and Papano about the tests that they will face on their journey to enlightenment. The first test is Silence and Tamino and Papagano are forbidden to speak. Tamino is taken to face Pamina and yet he refuses, even in the face of luscious food and the temptations of the Queen’s three ladies.  And yet, he resists. On the other hand, when Papagano meets an old woman he fails to see that she is the girl of his dreams and he tries in vain to catch her.

Meanwhile, Pamina is forlorn as the Queen of the Night appears and orders her to kill Sarastro. Monostatos attempts to use her trouble as a means of seducing her. Sarastro arrives in time to drive Monostatos away and explains that in his kingdom there is no room for hate and revenge. Pamina confronts him but to no avail. She is deeply depressed and considers killing herself. She is stopped in time by the three spirits who explain that Tamino needs her.

Tamino is now ready to face the final two tests, Fire and Water. Pamina arrives and with her leading the way they pass through the trials. The victory creates a cosmic shift and victory is won. Papagano is disheartened and the three Spirits arrive to remind him to use the magic bells. Papagena appears and the two love birds are united with visions of a happy marriage and many children.

The Queen of the Night comes to the temple and furious at being thwarted she attempts to attack Sarastro’s temple, aided with her Three Ladies and Monostatos. In the end an eclipse occurs and Sarastro and the  Order of Men and the Queen with her followers realize that everything has changed. Tamino and Pamina lead then to a new state of enlightenment and equality.

This Friday and Saturday there will be more performances both in the Musical Arts Center and on line. 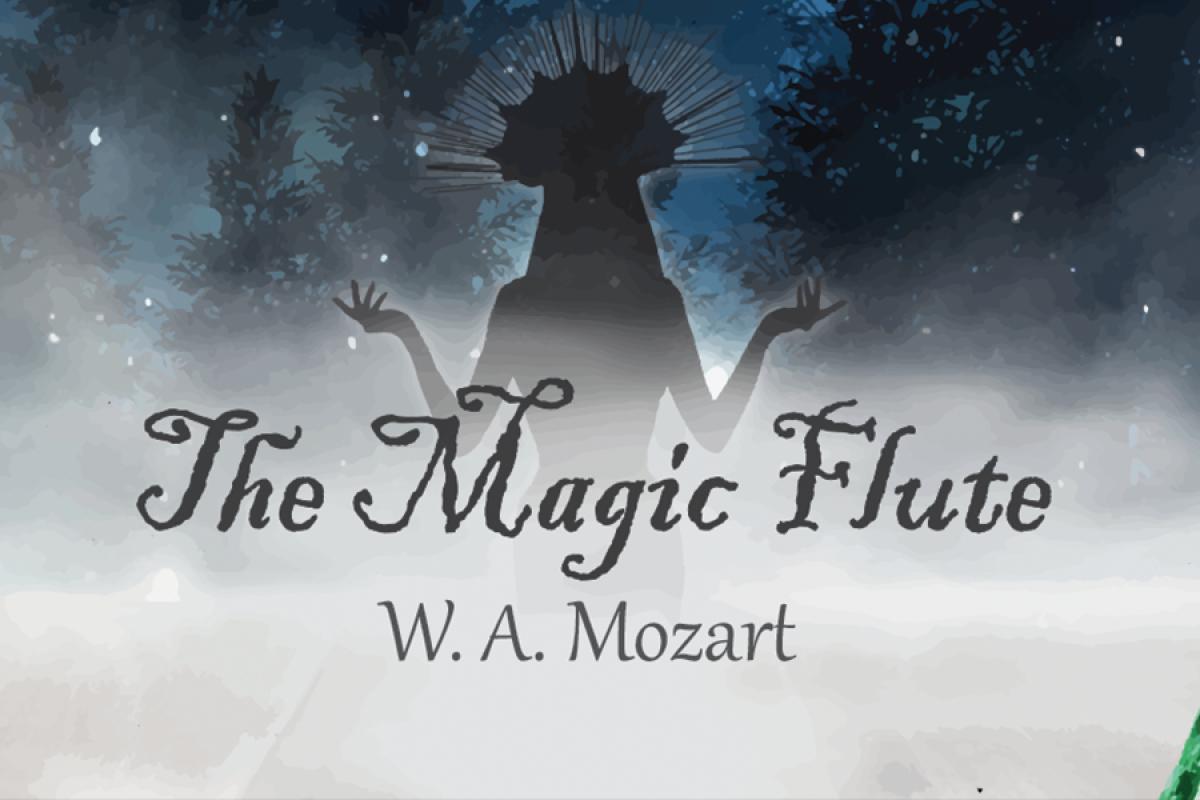