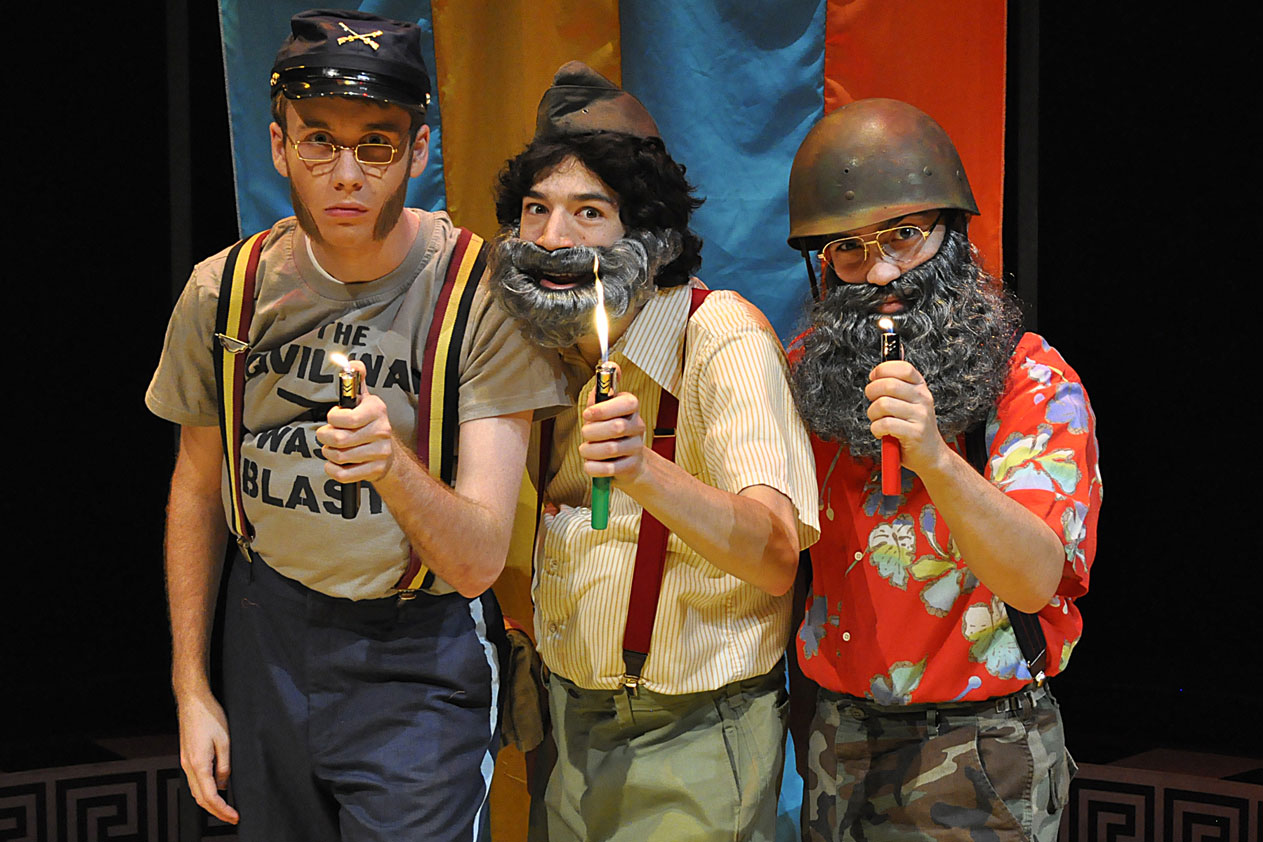 Aristophanes' anti war comedy Lysistrata is at the Lee Norvelle Theatre and Drama Center. The production, directed by Fontaine Syer, is a creative and spirited one that presents the message and is great fun. For the show, the Wells Metz Theatre has been converted into a one ring circus set. It opens with a ring master making the usual theater announcements, a comic strong man act, clowns and jugglers. Kristl Densley appears as Lysistrata. As she dons the ringmaster's jacket, the play begins.

What you may remember about Lysistrata is that the women of Greece unite to deny their men sex until they agree to stop the wars. What you may not remember is that in addition to agreeing to "cross their legs and think of Greece," the women take and hold the Acropolis, Athens' religious and financial center. The IU production certainly offers plenty of jokes about leaving the satisfaction of the male sex drive in its owners' own hands, but also does some justice to the economic aspects of the struggle.

The production uses the version of Lysistrata that Ellen McLaughlin wrote as part of a protest to the upcoming decision to invade Iraq in 2003. It's varied, fast-paced, and very much a contemporary version in which the actors always know that while the setting is ancient Greece, they're on stage in our time. Sadly, just as Aristophanes original didn't end the Peloponesian Wars, the production and other readings didn't halt the invasion.

Kristl Densel was magisterial as Lysistrata as she laid out her plans, dueled with officials and rallied her own troops. Joe Stollenwerk was magistratial as the beleaguered Athenian leader. Nicole Bruce was delightfully funny as Lysistrata's frowsy neighbor. Maddie Shea Baldwin and Nathan Robbins were amusing as they dramatized the show's testosterone driven tensions. Evelyn Gaynor and Hana Slevin neatly framed parts of the play with their comments and a few nicely sung, brief but pointed song parodies.

Having some of the cast hanging out, going through a few stretches, and chatting among themselves in the ring during the half hour before the performance left me wondering. Were they performing, in which case I should pay attention, or were they actually just warming up and hanging out, in which case I should avoid looking? It wasn't interesting enough to watch. It diminished the impact of that moment that I so look forward to in the theatre: the beginning of the show!

The resolution of Lysistrata is actually a bit of a down note. The men agree to stop fighting. Husbands and wives are united. Everyone's happy, but it just sort of happens. The circusy celebration that they've added is fun, with some incredible juggling, but it runs too long for its part in the dramatic arc.

However, the final, graceful dance scene as Lysistrata is reunited with her own husband, Aaron Densley, is just such a charming, lovely, romantic moment that all my minor criticisms were set aside, and I was left thinking of the creatively rewarding high points of the show.

Lysistrata at the Lee Norvelle Theatre and Drama Center has performances Tuesday through Saturday, December 6-10, evenings at 7:30 with an extra 2 pm matinee on Saturday.