Lost Letters at the BPP

The Bloomington Playwrights Project’s production of Jonathan Karpinos and Creighton Irons’ musical Lost Letters closed this past weekend. If you got to see it, this review will remind you of the experience. If you didn’t it will encourage you to get tickets for their upcoming show. The Enlightenment of Percival von Schmootz is described as a Monty-Pythonesque musical about a “ridiculously optimistic young man who sets out on a quest to end the dark ages.” Trust me, it will sell out.

As the lights go up at Playwrights Project there’s always a special feature to get the audience clapping and incidentally to introduce the sponsors. Ben Smith got applause as soon as he mentioned that he was the Associate Artistic Director. With a nearly life sized cardboard cut-out of the Producing Artistic Director, Chad Rabinovitz and the reading of a letter from the Chad of ten years ago, Ben set us up nicely.

Now back to Lost Letters. Our main character is Adam, played by Eric Shelley. He’s moved to Tennessee to support the recording efforts of his pregnant wife, Jess, Aubrey Seader. David Wade’s busy set is a multi-level affair, carpeted with faux Persian Rugs. There’s an electric keyboard, an unassembled crib, and stacks of unopened boxes. At the rear of the stage, conductor and pianist Sue Hartin leads a quartet that includes guitar, bass, cello…yes, an eloquent cello… and a carefully quiet drummer.

Adam sings about barely floating. He doesn’t seem to appreciate where he is, doesn’t seem to support his wife and dithers over assembling that crib.  Then, he starts looking through his collection of old letters. As he reads them, the characters appear. Lisa Podulka is Melissa, a girl that he grew up with. Her first appearance is from a letter that they shared when she was eleven. They were boyfriend and girlfriend at least through high school and she doesn’t want the thirty-three-year-old Adam to spoil her own future.

The versatile David Sheehan plays Adam’s father, his older brother Austin and a band mate named Ricky. The high school aged Austin appears and Adam counsels him about his future. The hip problems…following two surgeries they’ll vanish….and his foot problems…probably will keep him from that 4:30 mile that he’s wanted to run.

Ava, Sheryl Beth Silvers was Adam’s girl friend perhaps in college and after. They had a lot of fun together, but not enough for him to move from New York to Washington, D.C. and not enough for him to propose marriage. Adam’s father says that he liked Melissa and Ava, and that his son had three choices.

Despite Jess’s advanced pregnancy…seventeen weeks of not being able to sit comfortably, etc…and her proposal that they might take her record out on the circuit…Adam is still dithering about reading the instructions, finding a screwdriver and building that darned crib.

Director Bronwyn Steinberg has done a really nice job of focusing Lost Letters action. There is lots of dialogue that has to be smoothly fitted into solos, duets, trios and even quartets. Music preparation is by Brandon Magid. Kayla Cieslinki designed the costumes. With just a couple of subtle changes and his own acting skill, she allows David Sheehan to be a father, an older high school brother and a wigged-out band mate. Likewise, she helps Sheryl Beth Silvers to be a successful though disappointed career girl and a complacently wise grandmother.

Lost Letters does conclude neatly. Adam has finally put the crib together, he and Jess have agreed that they are both scared about the future of their twosome as a three some and after a stirring duet, the whole cast sings in a positive fashion. We still might wonder about Adam getting a job and just how Jess might get out on the circuit, but for the moment his letters…along with hers…will go up in the attic.

Did I mention that coming next at the Bloomington Playwrights Project will be the Monty-Pythonesque musical, The Enlightenment of Percival von Schmootz for what promises to be a sold out January 24th to February 8th run? 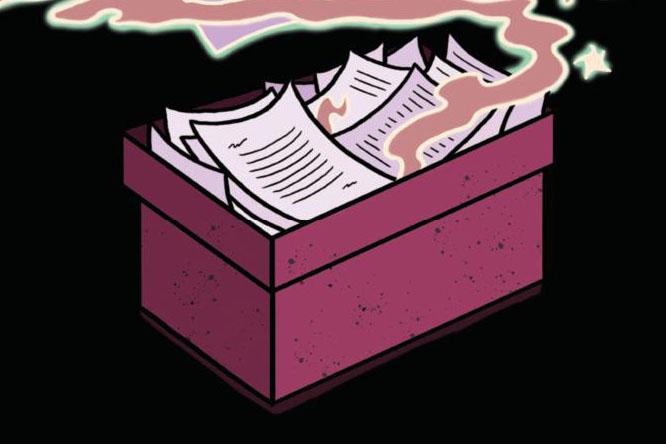