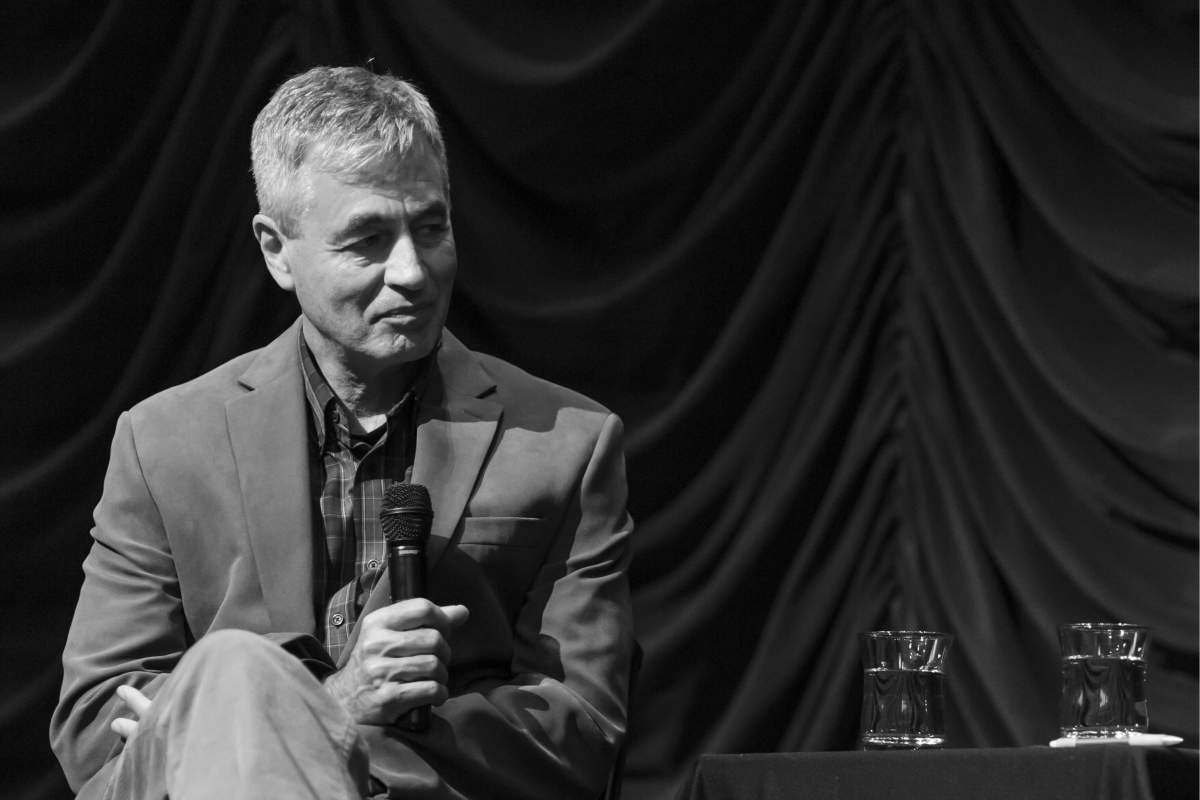 In October, filmmaker Steve James visited the Indiana University Cinema. He is the director of critically acclaimed documentaries Hoop Dreams, Stevie, and The Interrupters.

His most recent film is Life Itself. This documentary tells the story of late film critic Roger Ebert. Ebert is perhaps best known for co-hosting a movie review program on television with critic Gene Siskel. The film is an adaptation and an expansion of Ebert's memoir.

James Gray spoke with Steve James during his visit to the Indiana University Cinema. The interview took place on October 24, 2014.

James Gray: How well did you know Ebert before making [Life Itself]?

Steve James: I didn't know him well at all. I had read his reviews when I started to really study film because I was in Southern Illinois [University], and so I saw the show. I tripped across it. I started watching it. I was fascinated by it and really enjoyed it.

Then, when Hoop Dreams came out, he and Gene did this extraordinary thing. They agreed to watch this three hour documentary even though it had no distribution. It was just going to Sundance.

They watched it, and they loved it so much that they decided to go on their show and review it even though it was not in distribution. They said as much, and they made a plug for - "This film deserves to be in theaters"- which was huge for that film. It was a three hour documentary about two kids and their families no one had ever heard of.

That's kind of how I first, in a way, met them. And then over the years, a couple of times he interviewed me about movies, or because we were both were in Chicago, I would run into him at some event or some film event or such, and it was always very friendly and courteous. Then, I would scurry away because I really believe that he being a film critic and me being a filmmaker that we're not supposed to fraternize. So, I didn't really know him well at all.

When the opportunity came along to do this film, the idea was presented to me, and I hadn't read the memoir, and so I quickly read the memoir. I just thought, "What an amazing book. What a beautiful book." And so, then I said, "Yes. I'd love to do this." Really the making of the film was the chance to really get to know Roger.

Gray: When you read the book, did you think there was something missing that you wanted to show in the film?

But the one thing that he did not deal with in any great length with depth was the show with Gene. He has a chapter devoted to Gene, and he talks about things that happened on the show, but he really doesn't dig in, and I knew that was something that I really wanted to dig into.

There was this great oral history done by Josh Schollmeyer called Enemies, A Love Story. In its fullest version it's like a 20,000 word oral history.

We brought Josh on as a co-producer. Terrific guy. Terrific piece he did. And that piece that he did became the template and basis for really digging in depth into the relationship between Gene and Roger and how the show was born, and changed, andÂ the impact that it had.

Gray: Their relationship is so much a part of [Ebert's] personal life. As you see in the film, the two get along almost like family.

James: Or don't get along like family. [Laughter] It, as people remark in the film, it was like a sibling rivalry. Both of them would have readily admitted this: There was clearly an underlying respect for each other's knowledge, intelligence, and debating ability. These were two guys that were always used to being the smartest guy in the room when it came to film, and here they were both in the same room. These were two guys who came from very different backgrounds. Both had their share of tragedy. Gene lost both his parents when he was young and ended up working with his aunt and uncle and her kids, but he was also in a better situation economically. He lived on the north shore of Chicago. He went to Yale. Roger always wanted to go to an Ivy League school. [He] could have gone academically, but his family couldn't afford it. So, he ended up at U of I. Gene ended up at the [Chocago] Tribune which was the blue-blood Republican paper. Roger ended up at the people's paper, the Sun-Times. They had lots of differences about them that could rub each other wrong, but they were like these intensely competitive brothers.

Gray: And when [Siskel] passed, he didn't tell Roger.

James: Yeah. When they discovered the brain tumor that led to his passing, they didn't tell anybody. I mean, Gene and his wife Marlene- Marlene's in the film, and she's a hugely important voice in this movie- she talks about...how they didn't tell anyone. Only the most immediate family knew. They didn't even tell their kids because as Marlene explains, they didn't want the kids to be watching the clock and looking at their father like, "When is he going to die?"

And they also, because Gene was famous- a famous film critic, they didn't want it to turn into this sort of huge national story.

But it really did hurt Roger's feelings because Roger had been working with Gene all these years, and he could see that something was wrong with him. Everyone could tell that Gene was sick. They just didn't know what was going on or how serious it was. And so, yeah, it did hurt Roger's feelings that he wasn't told. It prompted him, as you learn in the film from Roger's wife Chaz, it prompted Roger to make a decision that should serious illness befall him, which it did, that he was going to deal with it in a different way. Well, he was certainly going to share it more with the people that he knew and were close to them, but it also led, I think, to Roger making the decision to kind of wage his battle with all of the cancer that he struggled with in a more public way which I though was incredibly courageous.

Gray: Did he change your view of death?

James: Oh, yeah. I don't think about morality in any sort of deep way. I think about getting old but not death yet. But given the way I've viewed getting old, I think I can definitely learn from Roger about facing the inevitable.

We learn early in the film that Roger wrote at the speed of typing- that he could knock out a review that was fully thought out and beautifully constructed in 30 minutes, which would make him the envy of just about every critic out there. He was a very, very fast typer. he wasÂ an old-style reporter- hunting and pecking for the keys, but he was so fast at it, it didn't matter.

You see him in these later scenes of his life - his typing is very, very slow, but yet, it didn't stop him. He's still doing those reviews dutifully, watching those movies, and doing what he had done for fifty. There's something quite inspiring about that as well.

This piece is a part of an ongoing series of conversations with actors and filmmakers from the Indiana University Cinema. We are calling the series On Location. Expect to see more from this series throughout the month of November.

A longer version of this interview will appear on Profiles in 2015.