A Day In The Life...Of Joel Washington 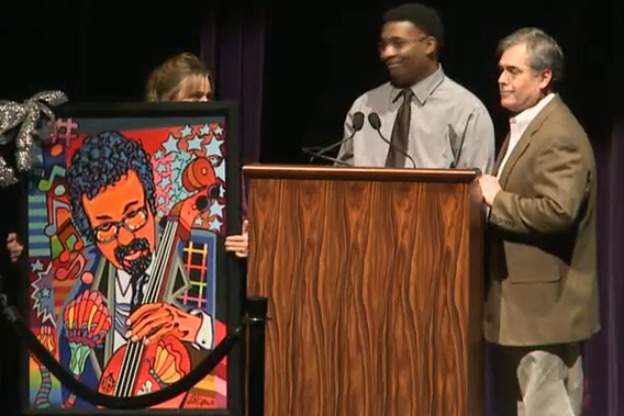 The image of the starving artist resonates for almost everyone. It's one that Joel Washington has intentionally sidestepped.

For the last 25 years, Washington has worked as a custodian at the Indiana Memorial Union at Indiana University. He works eight hours per day at the IMU, from mopping to floors to emptying the trashcans.

"Along the way, I was still painting and building up more confidence in myself and then things just started coming together in their own way," he says.

It's not like in the sixties and seventies where you could be a free spirit and say, ‘Well, I'm dropping all of this and going off and doing what I want.'

Washington grew up in Indianapolis with his two sisters and a brother in the 1960s. His parents were divorced and he and his siblings lived primarily with their mom. But on Sundays, his dad would pick them up. One Sunday, Joel pretended to be sick so he wouldn't have to go.  He had something else in mind.  The Beatles' Yellow Submarine was being shown on TV.

"That movie changed my life," he says. "That movie made me decide that I wanted to do art as a living."

Yellow Submarine and Saturday morning cartoons inspired Washington to be an animator. The vibrant colors of comic books and the paintings of Peter Max and Andy Warhol provided additional fuel for his artistic flame.

Eventually, Washington and his family moved to Bloomington, where he continued to sharpen his skills as an artist. After working several jobs throughout town, he settled into his position as a custodian and plans to stay there for a while.

"It's not like in the sixties and seventies where you could be a free spirit and say, ‘Well, I'm dropping all of this and going off and doing what I want.' You gotta have benefits, you gotta have economy," he says.

Washington says he won't leave his job if he can't find stability as an artist. Art doesn't provide healthcare, for example, so he needs the benefits that the university job has to offer.

But the job provides Washington with more than just health benefits. His first two big art shows were mounted at the union. Additionally, the  job has introduced him to people who would eventually become his clients. Washington's painting of jazz musician Wes Montgomery hangs on the building's  main level and has generated a lot of interest in his art.

His artwork has hung in galleries throughout the world and in the homes of celebrities. When Quincy Jones, a musician known for his production of Michael Jackson's album Thriller, was in town to speak at the commencement ceremony a few years ago, Washington was contacted to do a portrait of the award-winning producer.

He didn't have time to do a new painting, but Washington offered Jones a portrait he had done of Michael Jackson. He presented the painting to him at a talk Jones did with jazz composer and Indiana University professor David Baker.

"Quincy Jones was really moved by the painting, gave me this huge hug. He really liked it and it hangs up in his home now," Washington says.

Whether he is planning his next painting or art show, art is always on Washington's mind. He isn't quite sure what his future holds, but he is open to whatever direction it may take.

"I would love to make a living as a painter and travel and not have another care in the world," Washington says. "Some people are doing it and I feel somewhere along the way I may be able to do it."