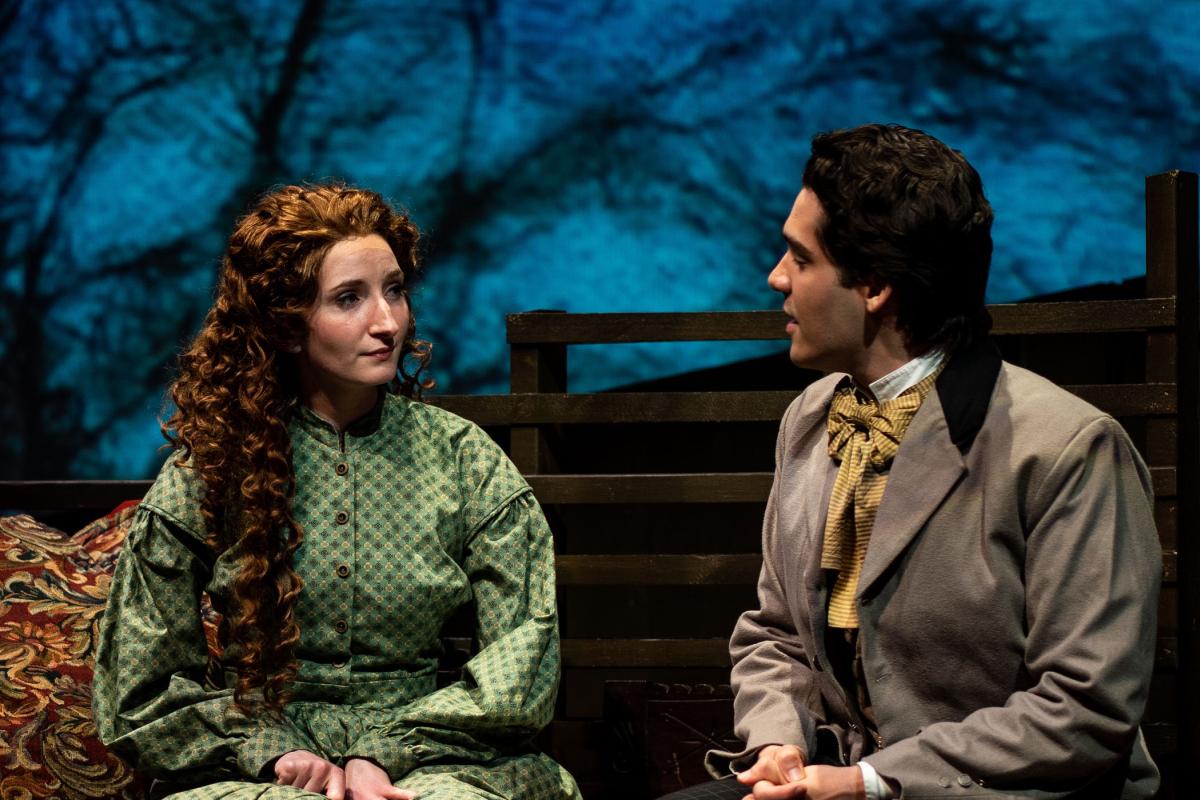 Samantha Rahn as the independent daughter Jo with Josh Carter as Laurie, the boy next door (IU Department of Theatre, Drama and Contemporary Dance )

IU's Summer Theatre opened their season with a lovingly crafted and presented production of Little Women.

Marisha Chamberlain's adaptation of the novel presents the four March daughters and their mother, Marmie in rich detail. It's the early 1860s and their father has left for duty with the Union in the Civil War. Louisa Mae Alcott modeled Jo the family's spark plug on herself and whether leading the family in theatrics or simply focusing their energies Samantha Rahn was very much at the center of the drama. Although Meg is the oldest of the March girls and the only one who works outside the home Brynn Jones deferred to Jo for much of the play. Tayler Fischer was appropriately shy and charming as Beth the doomed piano playing daughter. Allison Marshall in Amy's vanity and competition with Jo made us angry at her character until her miss judged plunge into icy waters brought back our and Jo's sympathies.

Although much of Little Women focuses on the women of the house, there is Laurie an eligible young man next door. Josh Carter as Laurie is smitten with Jo, and becomes a friend to the whole family. It's Laurie who takes Jo and Meg to the theatre leaving the angry Amy to burn Jo's manuscript. It's Laurie who sets up the little post office for letters back and forth and it's Laurie who rescues Amy when she falls through the ice leading Jo to nurse and forgive her. Josh Carter makes a graceful figure as the family's friend and later as Jo's disappointed suitor.

There are older adults in the play. Ken Farrell is Laurie's warmly dignified father and the gifter of a fine piano for Beth. Suzanne Lang Fodor is the acerbic Aunt March who remarks about the March's connection, "They are family even if the resemblance is not apparent." However as Amy tells the others…"you just have to get to know her."

Little Women comes to a mostly satisfying close. The energetic Peter Ruiz as Laurie's tutor has proposed marriage and been joyfully accepted by Meg. The disappointed Laurie will enjoy a year of pre-college European travel. Daniel Meeks, Mr. March the family's father returns from the war and in a bit of an outsized scene works things out a little too facilely for Jo's future. I've left Elise Chase who plays mother Marmie for last. It's Marmie who offers Jo her own best advice on overcoming anger and it's Marmie who outlines her goals for her girls, to make them "ready for duty and capable of joy." Her moments are small, but deep.

The arrangement for IU's Summer Theatre in the Wells-Metz reminds me just a little of their old summer residence in Brown County. Reuben Lucas's set with the down stage central fireplace, a cozy chair on the left, a gracefully aged rocker on the right and the comfy couch in the center were flanked by the dining table deep left and Jo Marsh's little study high and deep on the right. At the back were wall filling projections of nature and carefully chosen messages offering a bit of the text and the time sequence. Wonderful period costumes, especially the hats were by Katie Cowen Sickmeir.