Little Shop of Horrors is a Hit! 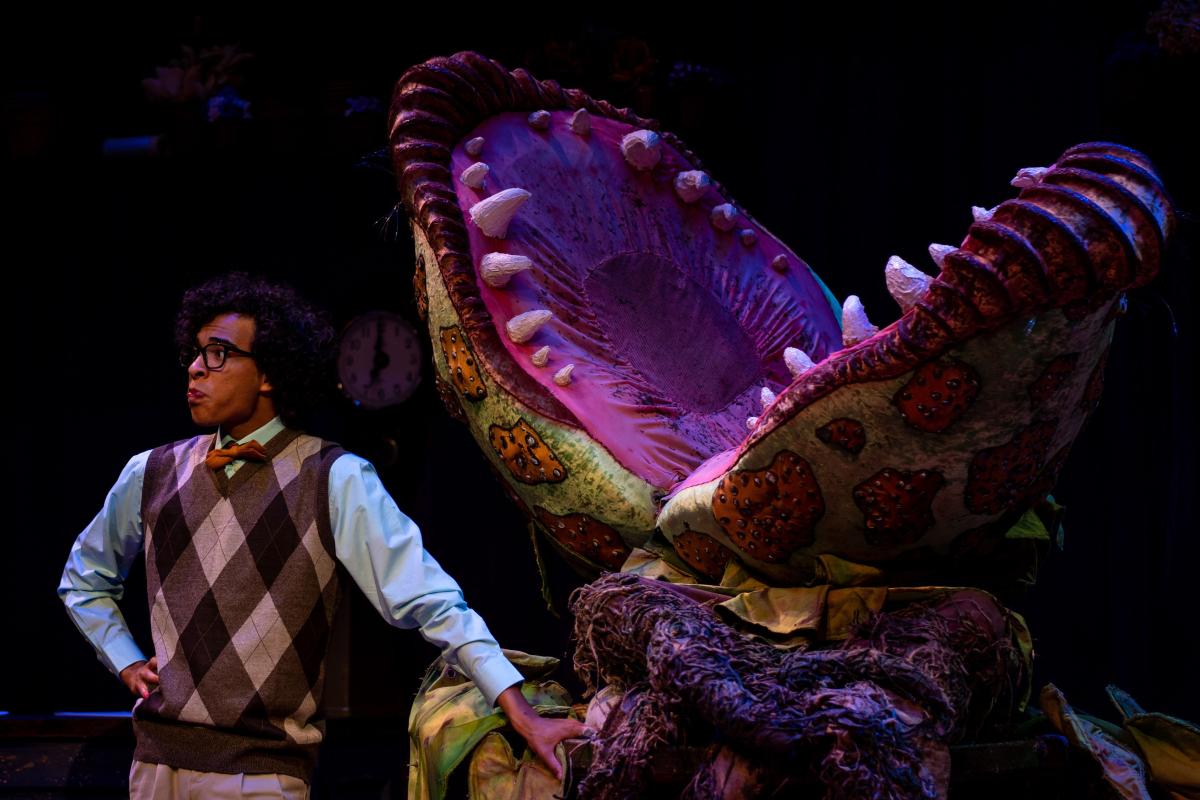 The IU Summer Theatre production of Little Shop of Horrors is wonderful. Long ago, I first saw the show in the old IU Theatre with Howard Ashman in attendance and James Mumford voicing Audrey II, the plant. Howard is many years' dead and James, who went on to join the Broadway cast, died recently. Since then I've seen the show many times. It's come to the IU Auditorium a couple of times in the winter. In the summer it had a neatly spunky production at Shawnee with a rented plant.

Nothing prepared me for the electric opening of this production. In the richly detailed and junkified Skid Row Flower Shop of Reuben Lucas, Danielle McKnight, Victoria Wiley and Shai Warfield-Cross magically appeared as the Ronettes, every fifties teen aged boys dream. It was a "wow" moment. With Richard Roland's direction, the choreography of DJ Gray, the spot on-- period sense musical direction --of Terry LaBolt and the costumes of Rachel Sayler these ladies were always in the right places at the right times with just the right amount of sass and deference.

Joshua Robinson was totally in character as Mushnik the shop's depressed proprietor. Acting, singing, sweating, if he leaned just a little too hard on the shtick it fit with a man who would meet his doom looking for the day's receipts in the cavernous recesses of the overgrown plant.

Ethan St. German was a charmer as Seymour his beaten down assistant. He's the one who discovers the plant, names it Audrey II and learns of its peculiar dietary needs. Nina Donville was his Audrey one, the beaten up lady of the sadistic dentist. Her rendition of "Somewhere that's Green" was so gently, thrillingly perfect that there was an unscheduled, momentary hush in the audience as she finished.

Christopher Crider-Plonka was Orin the dentist and lots and lots of other quite distinctive characters, winos, customers, hustlers, etc. "Be a Dentist My Son" was a hit and he's got a variety of maniacal laughs that could keep children up at night.

Jeremy Gussin voiced the plant and added a male note to the Ronettes harmonies. He's a wonderful presence and yet Saturday's audience didn't quite understand what a key figure he'd been. Applause was just a bit hesitant and people told one another, "Hey, he was the plant." Michael Baylor who'd been coordinating Audrey II, the plant's movements with Gussin's voice was more obvious as he simply hopped out onto the stage.

P.S. when I arrived at the theatre,a good half hour early, there was already a patiently waiting line past the box offices waiting to get in.

Little Shop of Horrors at IU's Summer Theatre in the Wells-Metz continues in repertory with Little Women through July 28. You may find this review, a review of Little Women and a preshow talk with Linda Pisano at wfiu.org/arts