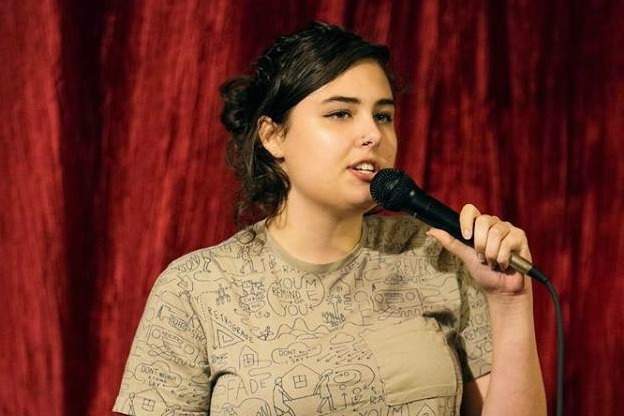 Mo Mitchell is a 21-year-old comedian who says her comedy aesthetic is inspired by that mysterious, drunk, bitter aunt who randomly shows up to family gatherings.

"She's super rich, but no one knows where she got her money from. Pretty sure she killed one or two of her ex-husbands," Mitchell says, laughing.

Mitchell will be returning to Limestone Comedy Festival for her second year, after first being invited in 2015 to perform in the "BloomingTEN," which highlights ten of Bloomington's up-and-coming comedians.

"My comedy focuses on the absurdity of dialogue," Mitchell said. She said she seeks inspiration from her friends, many of whom are comedians, along with everyday strange happenings. For Mitchell, art is in part a coping mechanism, something she feels she needs just as much or more than her audience - but it's also a craft to which she devotes herself.

"I definitely see comedy as an art form. One of my favorite things about comedy is you get to find the absolute absurdity in normality. I can get on stage and talk about a thought I had in the shower and everyone can relate to it. It really brings everyone together."

Mitchell said whether or not she catches a big break or reaches a level of stardom, what matters to her is performing and sharing her comedy.

As one of the youngest comedians in the Bloomington scene, Mitchell said she gets teased, but also sees her youth as a perk. She has a lot of time ahead of her to grow as a comedian, and plans to make the jump to Los Angeles in the coming years for more opportunities. This summer at Limestone, she's looking forward to another weekend of laughs.

"As far as [my act is concerned], you can probably expect some crying, some bad drunken mistakes, my mom using flash photography in a room you're that not supposed to use flash photography in. Just a lot of fun. You get to support this growing community, by going to this festival you get to ensure that the next one's going to be just that much better, because it just does keep getting just that much better."