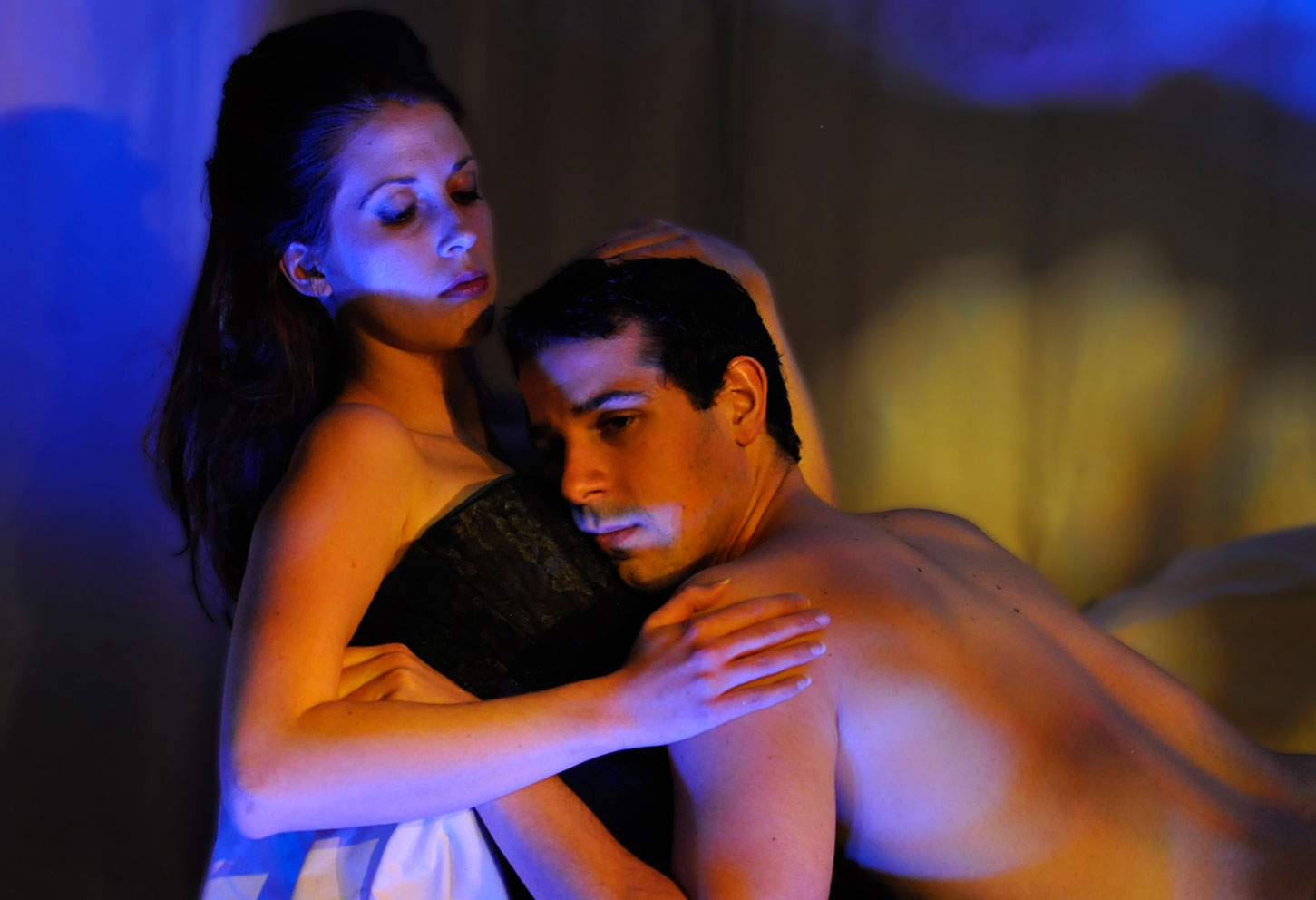 Dangerous Liaisons, Les Liaisons Dangereuses is at the Lee Norvelle Theatre and Drama Center with its heady mix of seduction, corruption and revenge among the French upper class just years before the Revolution.

La Marquise de Merteuil (Molly Casey) bargains with Le Vicomte de Valmont (Adam St. John), her former love and frequent partner, to settle a score for her by seducing Cécile Volanges (Curtney Lucien), the promised young virgin of a man who rejected Merteuil. At the same time Valmont has his own project, the seduction of the upright and religious Madame de Tourvel (Andrea Mellos).

After a fair amount of complex strategy involving lots of and lots of lies and machinations, both goals are accomplished. Cécile, the young virgin, has reacted quite enthusiastically to being quite inappropriately schooled for her upcoming nuptials. The married Madame de Tourvel has succumbed to what she believes and perhaps Valmont himself believes is love.

With Valmont successful for both the Marquise and himself, he demands that she submit to his affections. First she demands that he break off with Madame de Tourvel, which, in an anguished scene that doesn't quite work, he does. But then the Marquise still refuses, declares war, and arranges for her young lover, Le Chevalier Danceny (Ross van Dongen) to challenge and kill Valmont.

Molly Casey, with a perpetual wide-eyed look and unwrinkled brow, is always on as the coldly plotting Marquise. Adam St. John's Valmont is a more passionate conspirator, but his mostly wry grin is part of his armor. Curtney Lucien handles the transition from shy convent girl to eager bed partner with vigor. Andrea Mellos's upright Madame deTourvel, who's eventually overcome, is touching. Hana Slevin is a charmer in the scene where Valmont uses her naked back as a writing table. Leslie Spitznagel and Megan Taub are quite perfect as singing chamber maids.

Lauren Ayn Lusk's set design for Les Liaisons Dangereuses offers a raised stage, thrust into the U of the Wells-Metz Theatre with a stunning backdrop: a floor-to-ceiling corner door, and windows trimmed with wine-red drapes. The all-white furniture with gold trim stands out beautifully.

Colleen Alexis Metzger's costumes actually tell the story of the characters. Charming evocations of the period, they are also a nod to the present: Tyler Gordon's Major-Domo costume cleverly recalls the candelabra in Beauty and the Beast.

Director Nancy Lipschultz's direction is effective, nicely blocked and smooth in its transitions. She uses a lot of space. In most scenes, characters are a fair distance apart, making intimate moments even more affecting.

Les Liaisons Dangereuses appears on the surface to be about sex, and there's certainly plenty of it, but it's really about power and status. When the motivating Marquise de Merteuil announces her creed, she says, "I was born to dominate and revenge my sex." It's true that the play's battlefield is the bedroom, but it could just as easily be a male-dominated board room. Buyouts, takeovers, mergers, short sales, and the whole passionate language of big business and finance stand in for sex and even love. It's an interesting way to think about the play.

Les Liaisons Dangereuses at the Lee Norvelle Theatre and Drama Center continues with Wednesday, Thursday, and Saturday evening performances at 7:30. Saturday there is also a two o'clock matinee.