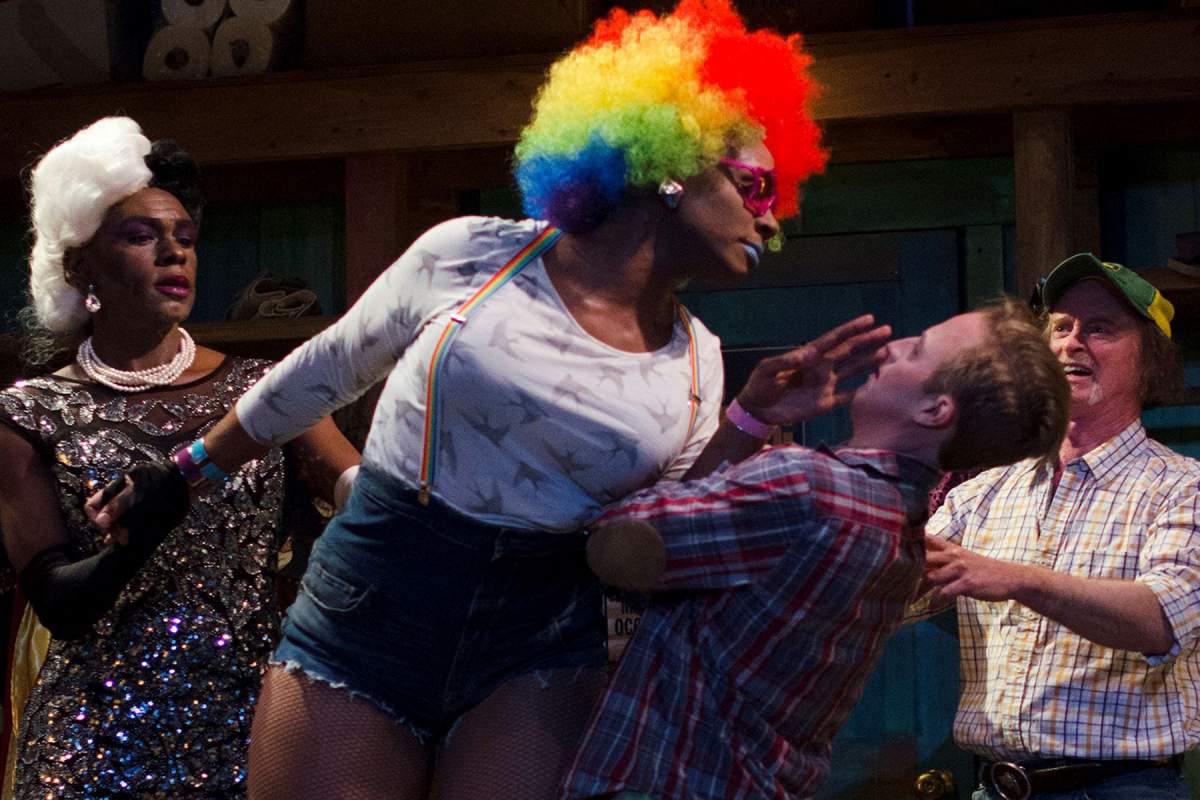 As the Cardinal Stage Company's production of Mathew Lopez's The Legend of Georgia McBride opens a very much down on his heels, beer swilling club owner and stage manager Eddie played by Mike Price carelessly introduces Will Mobley as Casey an Elvis Impersonator.

For a moment…with "the King" on the sound track we're energized, but Casey's inspired but hapless dancing quickly drains the moment. Later, back home with his wife Jo, played by Melody Louisdhon , Casey has to confess that he's spent their rent money on pizza and she is outraged that he has also bought a new jumpsuit for his act. The ante goes up as Jo announces that they're pregnant, and Armand Fields who plays Jason, his longtime friend and landlord, says he's got to have the rent.

The next evening as Casey prepares to go on stage, Eddie announces that Casey and his Elvis act are being replaced with a drag queen act. The very professional drag queen Tracy, (Aaron Holland) arrives with the very drunk Rexy (Miss Anorexia Nervosa played by Armand Fields in a startlingly different role.) Rexy passes out and at Eddie's demands, a reluctant Casey agrees to go on in her place.

Tracy gives Casey and the audience a quick class in dressing a drag queen. Casey clumsily pulls on a set of Spanks with a padded derriere and then adds panty hose. "Toesy's first," says Tracy. Then she cinches him into a waist slimming corset and adds a padded bra. Next she dresses him as Edith Piaf, adds a badly fitting wig and gives him a rapid class in lip synching French.

It's a tribute to the writing and to the actors that Sunday afternoon's audience quickly moved from surprise and wonder to pulling for the struggling Casey who has taken the stage name Georgia McBride. The audience really wanted him to succeed.

Back home with the pregnant Jo, Casey is proud to be bringing home money for the things they need, but he claims that he's made the money as a bartender.

In the months that follow, Casey becomes more adept, takes on new roles as Georgia McBride, and is enjoying his drag queen act. He's even worked up a series of costumes based on his old Elvis jumpsuit. As the show prospers, stage manager Eddie's appearance, confidence, and outfits improve. The calendar shifts are signaled by his appearances. He has a corsage for Valentine's Day, a bit of the Blarney for Saint Patrick's Day, a rubber beach toy for the summer, and an all red white and blue outfit for the Fourth of July extravaganza.

With the regular paychecks and tips that Casey still claims come from bartending, things are good at home. The pregnant Jo is happy with security of the additional money, and Casey's friend and landlord Jason is happy with the regular rent check. Although he loves the expressive freedom on stage, Casey still feels a certain sense of guilt about entertaining in drag and he hasn't been able to tell his wife.

One evening in the dressing room, Rexy confronts Casey about the comparatively easy time he's had to reach the stage. She tells him about being attacked at the age of 16 after coming out of a  bar dressed as a drag queen. Rexy tells Casey that drag queen artistry is not just entertainment or even an art form, but a symbol. Rexy talks about the violence of his childhood and the abuse that other sexual outsiders have endured. Rexy tells Casey that he's been playing the part but not being or understanding the drag queen culture. Rexy says: "Drag Queen is not for sissies." Casey is chastened.

Shortly, his clueless quite pregnant wife Jo arrives unexpectedly in the dressing room. She finds Casey in a sequined bra, sequined high heels, heavy makeup, and a Dolly Parton-like wig. Jo is shocked and Casey is guiltily mortified. When Jo, disappears in anger, Casey decides to give up the act. There's a very nice moment in the show when he offers a farewell performance with a very nicely played and sung vocal. But this play is a comic legend and things get ironed out. Jo and Casey are reconciled. Casey returns to the show. Rexy and Tracy are the god mothers of their twins, and the wild trio finale leaves everyone smiling.

Mathew Lopez's The Legend of Georgia McBride is enjoyable for the fine acting, the laughs and a few well done telling points. It's directed by Joanie Schultz. Set design is by Jacqueline Penrod. The wildly inventive costume designer is Johan Sewell. Performances at the Ivy Tech Johan Waldron Auditorium continue through February 19th.

You can see this review and others at WFIU dot ORG