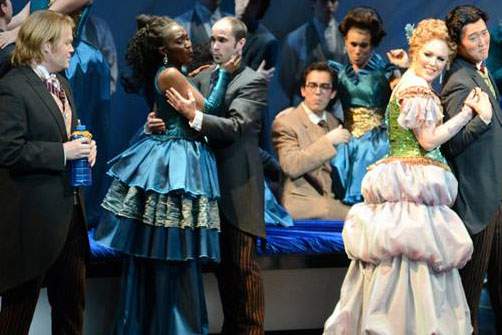 The IU Opera Theater's new production of Giuseppe Verdi's La Traviata opens with a mysterious bit of theatre. As guest conductor Joseph Rescigno leads the orchestra in the overture a little boy and his father pursue a brightly colored butterfly. Catching it they place it in a lovely glass display case. As the curtain rises on the opening party scene of the opera the lights focus on the opera's doomed heroine Violetta in a costume echoing the colorful accents of the butterfly.

In Wednesday night's dress rehearsal the singers were wonderfully dramatic and assured with obviously clear support coming from the pit and the orchestra's fine playing. The new production promise a cutting edge take on the classic so I'll focus on the set, the costumes and the staging.

Set designer Cameron Anderson picks up the main stage picture from the image of the butterfly case. There are huge glass walls on either side of the stage. They always remind us of the fragility of Violetta's life.  Although they disappear for a while during her country sojourn with Aflredo away from the life in Paris, the butterfly in its case, the proud possession of the now grown up Alfredo, is on a table in the cottage room.

La Traviata's look feature tight bodices and full skirts for the ladies and attractive jacket and vest combinations for the men.  Linda Pisano's costumes are inspired by the look and line of the 1870s. In the opening scene of Violetta's party the ladies are all in rich shiny teal blue with some gold accents. The gentlemen in Grey and brown with the blue picked up as well. While a considerable restraint is the rule here, later on at Flora's more boisterous party abandon and a wild variety of dress and undress is more the order of things.

There's plenty of carefully thought out and arranged action in this La Traviata. Party scenes ebb and flow with nice placement of the individual highlights and the more intimate scenes are handled nicely as well. Stage director Jeffrey Buchman has added a quartet of ghostly white ladies to the stage picture. They first appear when Violetta has a brief recurrence of her illness and from time to time return to dramatically remind us of just how close to the border between life and death is the life she lives.

This new production promises edge and sumptuousness and it delivers both with new sights and insights for this classic.

The IU Opera Theater's La Traviata opens this Friday, and plays Fridays and Saturdays, April 11, 12, 18 and 19.