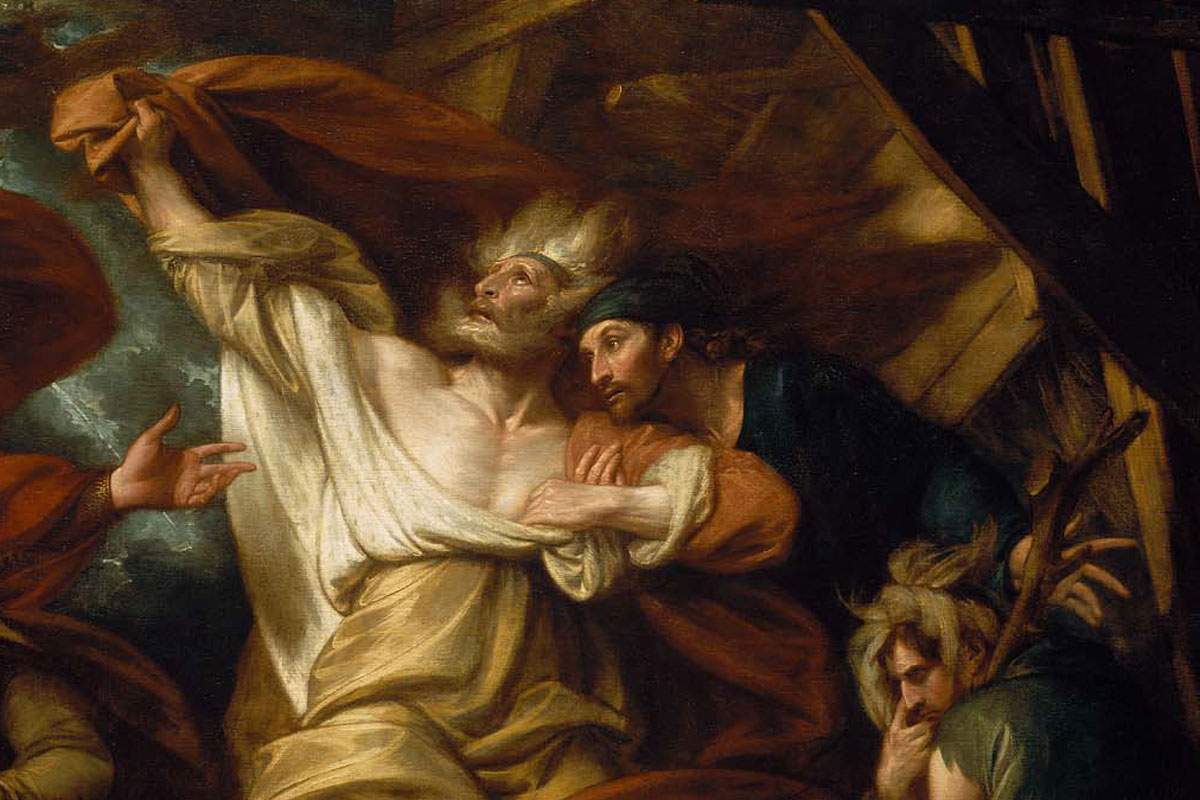 Shakespeare's King Lear is on stage at IU's Wells-Metz Theatre in "A contemporary world premiere." Theatre director Murray McGibbon has worked to present …Lear as it might have sounded at its original premiere in 1606. He's brought in guest artist Graham Hopkins to play the king with an accomplished cast of IU theatre students. He's also cut the work to play in a trim, fast paced two hours.

The play is spoken in what's called "original pronunciation" or O.P. and McGibbon has assembled a set of four arguments for the sound. From contemporary grammars we learn that the letter "o" came to "u" hence brother, love and prove all rhyme. Spellings from the period suggest words like "murder" and "burden" sounded like murther and burthen. Third, Arguments from couplets in Shakespeare's own sonnets seem to show that come and doom were close to cuum and duum. And finally, the three preceding cases simply lead to some wonderful word play. In the final scene of McGibbon's King Lear, with the bodies strewn about, the word "nothing" resonates again and again as it is pronounced noting, noting.

King Lear is the story of a man, successful as a canny king, but a failure as a clueless father. He embraces his two coldly politic daughters, Goneril played with icy height by Abby Lee and Regan, a tartish Charley Tench. He rejects the somewhat churlish, but honest Cordelia, Tara Chiusano. Cordelia's vying suitors now consider a penniless orphan instead of a landed princess. Blake Avery played the Duke of Burgundy who opts out of the bargain and exits. Caleb Curtis was the wiser King of France taking Cordelia for her value as a person.

As Lear is discovering just how bad a father's decision he has made as a lame ducking throwing himself on the hospitality of his daughters, another father is being badly fooled by an evil offspring. Mauricio Miranda was the scheming bastard son Edmund cleverly setting his father the Earl of Gloucester, Chris Handley, against his natural son Edgar, Ross Rebennack. Edgar escapes, reappears in disguise as the beggarly Mad Tom and reunites with father blinded by Regan and her husband the Duke of Cornwall, Caleb Curtis. Miranda's Edmund was a wily fellow. He has quite a run as he schemes this way and that and even successfully courts both of Lear's older daughters.

Lear becomes quite the outcast. His daughters have stripped him of his outsized mobile court and his own high handed ways have further maimed him. He's out of doors in stormy weather with only two supporters, the winsome fool played by Andrew Rogers, and the stalwart Earl of Kent, Mathew Murry. Because of Lear's foolishness, Kent has actually taken on the disguise of countryman Caius. It's a wonderfully complex part of the play and Grah am Hopkins handles it very well. Lear is teetering between rage and madness, but at the same time a certain compassion and concern for the least around him seems to well up.

In the final scene as a French army led by Cordelia's husband approaches, things come to a head and the body count rises. Gloucester has died in his natural son Edgar's arms. Lear is briefly reunited with Cordelia before she is killed and he follows her in death. His hanged fool's body has been rolled in. Edgar kills the scheming bastard Edmund. Goneril poisons Regan and commits suicide. Goneril's husband who stayed out of the scheming Albany, Blake Christ with Kent and the French King are left to reassert authority and order.

Throughout Murray McGibbon's fast paced adaptation the pace is brisk but mostly clear. I did find that in the final scene, I was a little confused about just who was whom, but otherwise it was clear. A production in the round presents its own advantages and challengers, but mostly the director and actors solved them to the play's advantage. Generally, I liked the sounds of original pronunciation. It had a richness and natural feel in the actors' mouths.  I had I little difficulty with the dialog, though I did have trouble when Mad Tom was supposed to speak in a rougher accent.