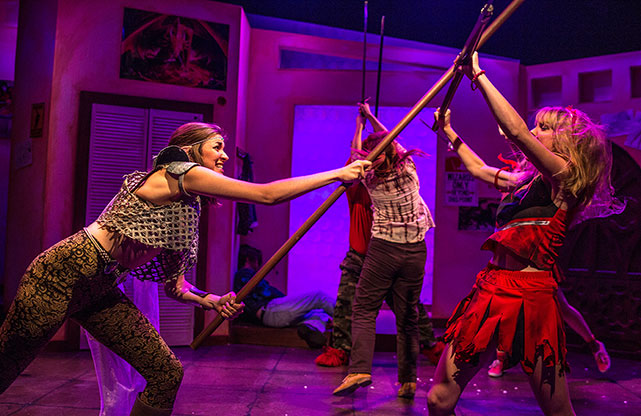 In Qui Ngyen's play She Kills Monsters at the Bloomington Playwrights Project, Agnes, Heather Michele Lawler, is an average figure. Average height, average weight, average mid-twenties school teacher…average, average, average…except, perhaps a bit below average in imagination and ambition. As she comes upon a notebook that the teen aged sister she mostly ignored left at her death that all begins to change.

Sister Tilly, Emily Kelly, has left a detailed Dungeons and Dragons style role playing game complete with characters and challenges that depend on the rolls of dice. Somewhat hesitantly, Agnes goes to a local magic shop and convinces the owner Chuck, the redoubtable Ben Smith, to be her dungeon master.  The play takes Agnes and us into the world that Tilly created.

In Tilly's quite wonderful world, the shy nerdy teen is Tilly the Paladin, a fearsome adventurer. A wheel chair bound friend, Korinne Dunn is a wonderfully graceful elf. A shy fellow, Zach Trinkle, is the fearsome horned Orcus. A Goth girl Tilly admires and desires, Katherine Nash, is her sturdy, loving companion.

There are plenty of martial arts challengers to be met in the game as Agnes and Tilly wield swords while the elf swings a quarter staff and the Goth hefts a battle axe. Thanks to the efforts of director Scott Weinstein and fight choreographer Matt Herndon, it didn't appear that that there was any permanent damage, but I'm betting on a few hidden bruises.

At first Agnes is overwhelmed by the game, the reality of it and the challenges, but as she meets and overcomes them her understanding and love for her lost sister grows as her own inner warrior is nourished by the game.

The production of She Kills Monsters at the Bloomington Playwrights Project is first rate. David Wade's scenic design with a bed that magically appears and disappears, lighted by Lee Burkes is a fine place for the adventure and the more prosaic moments. Heather Michele Lawler is a pleasure as the initially average and then quite anything but, Agnes.  Emily Kelly is a sympathetic figure as the nerdy sister who takes on the role of a heroic adventurer. Bianca Black was Agnes's school teacher companion. Josh Burkholder was Agnes's hesitant fiancé.  Kelsey Carlisle was the charming story book narrator framing the play and with Brantley Goodrich a blood sucking cheer leader in the game.  Nick Pappas got good laughs as an unfortunate Dungeons and Dragons wannabe, who's quickly dispatched every time he comes on the scene either in the game or at school.

It's a very clever play. There's lots of action, interesting monsters, neat switches from real life in and out of the game.  At its heart She Kills Monsters is a delightfully tear drenched story of how the dead Tilly's game brings Agnes to life.