To Kill A Mockingbird Opens At The Buskirk Chumley Theatre 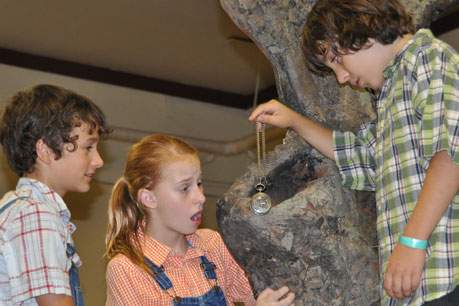 The Cardinal Stage Company's "Risk It All" 2012-2013 season opens with To Kill a Mockingbird. Small town lawyer and single parent Atticus Finch, Dan Rodden, risks his life, reputation and the safety of his family to defend an innocent black man, Tom Robinson, Ian Martin, against a charge of rape. Even though Atticus knows that he can't win, his honor and respect for himself as a man and father demands that he marshal a tensely played creative, clever, solid and yet doomed from the outset effort.

The story of To Kill a Mockingbird is told in flashbacks through the vision of the grown up Finch daughter, Scout, Constance Macy. It's a hot southern summer in 1935. Atticus's children: Scout, Ciarra Krohne, her brother Jem, Elijah Earle and Dill, Nathaniel Cox-Thurmond, a summer visitor, have time on their hands. They're full curiosity especially about their reclusive neighbor Boo Radley. Their also full of restless  energy that's only occasionally controlled by the Finch housekeeper, Calpurnia, Gladys DeVane.

Constance Macy, as the adult Scout was a charmingly engaging guide through the story. Alan Craig as the sheriff was a bluff figure with his own inner sense of right and wrong. Emily Scott, was pathetic, sympathetic, and yet unforgivable as she accused the innocent black man of rape. Ed Mobley was a frightening figure as her perpetually angry father. Mike Brewington appeared briefly as the mysterious recluse Boo Radley.

Dan Rodden as Atticus Finch leaned toward the gentle and thoughtful, almost as if embarrassed at his eloquent bravery. This tribute to moral strength through caring is at the heart of the play. Ciarra Krohne was a sprite as the young Scout. There was a momentary flash of pure love from her to Atticus as they sat on the porch that was something to remember the entire play for.

The Cardinal Stage Company's production of To Kill a Mockingbird at the Buskirk Chumley Theatre continues with performances through September 16th.