Kalamazoo: A Dream Of A Bird Sanctuary Or A Beach 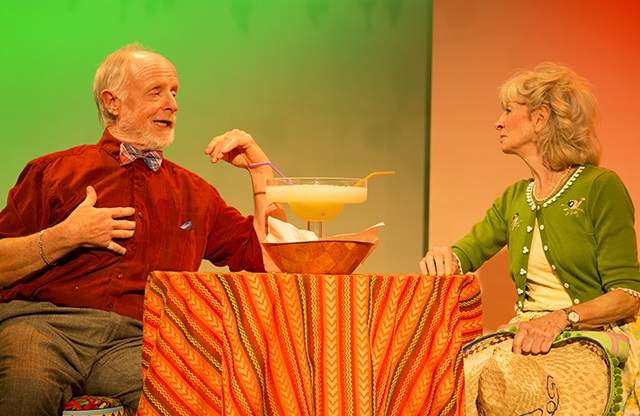 The Bloomington Playwrights Project opens their 2014-15 season with the Reva Shiner Comedy Award winning Kalamazoo by Michelle Kholos Brooks and Kelly Younger. It's a love story of two miss matched seniors forced into internet dating by their children. Peg, Kate Braun, is a stay at home Roman Catholic bird watcher who longs to see the bird migrations with a visit the famous sanctuary in Kalamazoo, Michigan. Irving, Ken Farrell, is a Jewish metal detector beach comber who's only geographical yen is to never be part of the southern migration to Boca Raton.

Their developing relationship has many very funny and a few touching moments as Peg and Irving navigate their differences, their fears and their hopes.  Fueled by a Mexican restaurant's  basin sized Marguerita and a mariachi band, things get off to a too quick start. There's a step back followed by a far from easy path. Both of them had long successful marriages that both encourage and challenge their growth as they get to know each other and themselves better.

Ken Farrell is particularly good at showing Irving's outward confidence and his vulnerable side. Kate Braun works from the other side as her Peg grows from a fragile tenuousness to a more confident and even glowing self. Kalamazoo is an involved and skillful piece of writing and from time to time there were moments that I thought may read even better than they play.

Scenic and lighting designer Lee Burkes's graceful winged set combined with a multi-level circular floor to offer a physical metaphor for director Chad Rabinovitz' s staging of the Peg and Irving's evolving relationship.  As scenes changed Peg and Irving slipped in and out of Chris Rhoton's costume design. The props juggling black clad stage crew combined with Burke's choice of lights and Chris Alexeev's sound design to transform the stage from the interior of a restaurant, a disco and a hotel room to the outdoors of a beach and a bird sanctuary.  Part of the special pleasure of the BPP's production of Kalamazoo is the joyful use of all the elements of live theatre