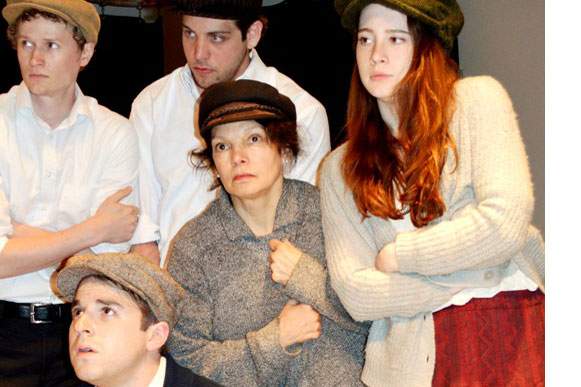 Jan Karski was a Polish catholic soldier, resistance fighter and courier who took the stories of the holocaust from the ghetto and the extermination camps of the holocaust to England and the United States. Even years later as a distinguished professor at Georgetown University, he blamed himself for not being forceful enough to stop the slaughter of the Jews.

The Jewish Theatre of Bloomington celebrates its tenth anniversary with a production of Arthur Feinsod's play named after Karski's code phrase, Coming to See Aunt Sophie. The play is a new one, but already well-traveled. It opened two years ago with a celebration of the Karski Centennial in Poland, went on to three performances in Germany and last year was featured at the Crossroads Repertory Theatre in Terre Haute and at the Chopin Theatre in Chicago.

Bloomington based director and IU faculty member, Dale McFadden has been associated with the development of Coming to See Aunt Sophie in its several versions and directed all of the productions. Later this year he travels to Sydney, Australia for a production there.

In the play set in 1975, the troubled Karski played with dignity by regional veteran Gerard Pauwels is the reluctant subject of a documentary about his life. As Karski remembers and talks, IU theatre and music grad David Gordon-Johnson acts out the many dramatic scenes of his heroic story.

Just four other actors move briskly from role to role as the more than seventy characters of the young Karski's life. Emily Sullivan is his frightened sister, a traitor, and a sympathetic nun. Jason West is a protective school friend, a peasant who takes him in,one of the Jews who persuades him of their peril and a Polish priest who gives the young Karski a communion wafer instead of a cyanide pill as a talisman. Martha Jacobs is an inspiring Polish author and firebrand, and the older Karski's vigilantly protective wife. John Putz is the film maker, a rough Wild Bill Donovan of the war time OSS and the awe inspiring FDR.

Saturday evening's performance began slowly, with the first act feeling its way into the narrative as the various pieces began to make more and more sense. It's a complex story being told in a very interesting and dramatic way with plenty of tense moments. From time to time there were announcements of specific dates, but they although sequential, they weren't tied in with the history of the period.

The second act had more energy and flow. I particularly enjoyed the moments when the older Karski was critical of his young self's satisfaction and the young Karski was critical of his older self's feelings of guilt and failure. The drama built through the scenes of Karski's failure to see Churchill and finally and most wrenchingly to the too polite failure to press the plight of the Jews with Roosevelt that has tortured him all of his life.