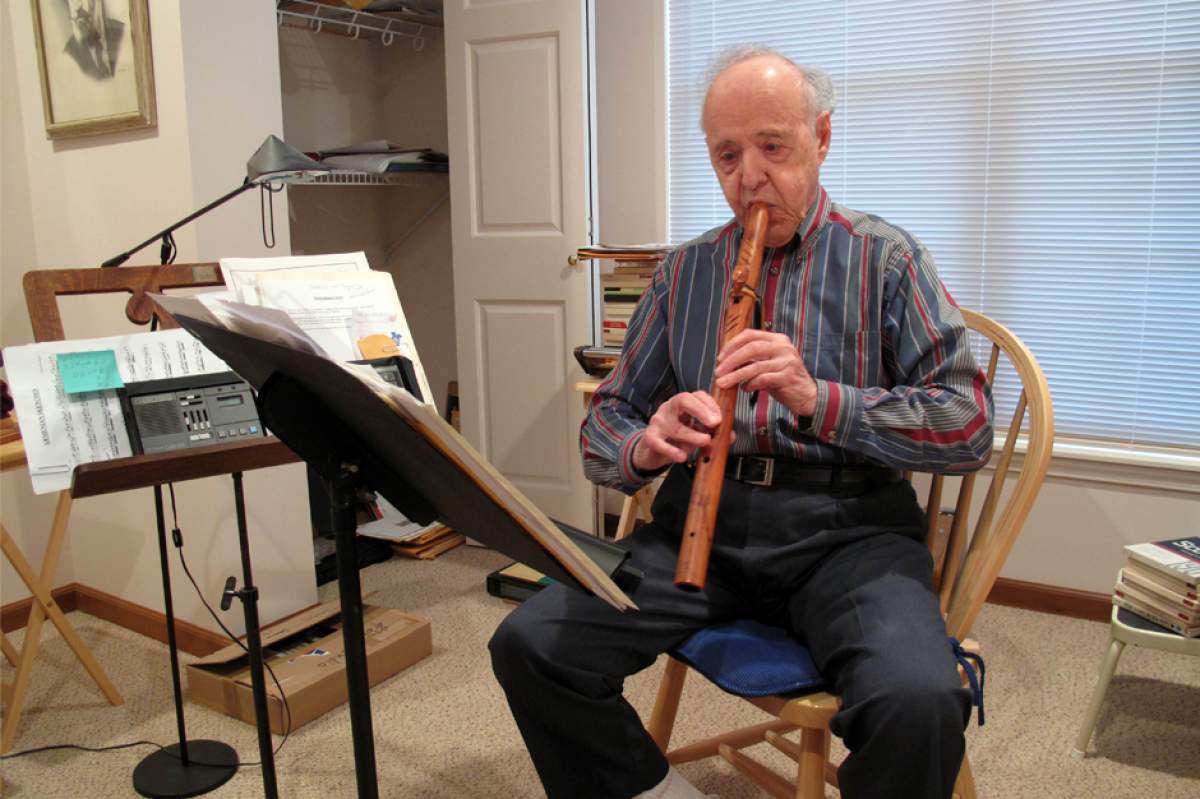 On a July night in 1994, flutist James Pellerite was at a powwow in Albuquerque, New Mexico, when he heard the sound that changed the course of his life.

Until then, Pellerite, now 84, had held such positions as first flute for the Detroit and Philadelphia orchestras, and professor at flute IU's music school. His career spanned sixty years.

Then he heard the haunting sound of the Native American cedar flute.

"From that night on I decided, â€˜This is an instrument that is so fascinating. The sound is incredible!'"

Pellerite sold his classical flutes and dedicated his life to exploring the simple wooden instrument with five or six holes. Now, Pellerite is a man on a mission: to break the boundaries of what people think the Native American flute is capable of, to bring it into the concert hall, to expand its repertoire with new commissions.

At his practice studio in his Bloomington home, with signed photos of Eugene Ormandy and Leopold Stokowski on the wall, Pellerite takes out one of his Native American flutes and blows inside to clear it. Nearly two feet long, the instrument is decorated with diagonal grooves. It was handmade out of pink ivory wood from Mozambique.

Native American flutes normally produce a minor pentatonic scale, but when Pellerite discovered the instrument, he believed it was capable of greater expressiveness. Under his fingers, the flute's five holes produce a fourteen-tone chromatic scale.

Holding the flute vertically like a recorder, he plays a scale from low G to a high B flat by cross-fingering and partially venting the holes. By playing this way, he is able to get as many as three tones out of a single hole. "Naturally, if you're a classical musician, you're going to think chromatically," he says.

At One with the Instrument

"The fact that the sound itself, regardless of the musical value, is what attracted me to it-that's the spirituality I refer to. I obviously get a message when I play a phrase, because I feeling as if I am one with the instrument. You have only this piece of wood, and an air column. That's it. No keys. No pads. No embouchure. Just your air column and your fingers. So you can feel the phrase."

Pellerite's latest recorded performance appears on a new CD of music by contemporary composer Hayg Boyadjian, who wrote the piece for him. It's a chamber work called Pleiades that features Pellerite playing in a classical style. (Other CDs showcase his musicianship in compositions that are more Native American in style.)

Kathryn Lucas, professor of flute at the IU Jacobs School of Music, plays classical flute on the record. All of the other musicians are IU alumni: violinist Rose Armbrust, cellist Yotam Baruch, and on marimba, Brian Blume. Charles Latshaw conducts.

Pellerite describes the piece as having "a multiplicity of moods."

"There are virtuosic moments, there are very subtle moments, and also quite dramatic, romantic-sounding phrases that call for the instrument to be played in a variety of ways. This is what makes playing the Native American flute in contemporary music so radically different from the way you normally hear it in its traditional pentatonic patterns."

From the Mesa to You Tube

The octogenarian shows no signs of slowing down.

He's collaborating with three composers on new pieces for the Native American flute, and working with a recent IU graduate on producing videos of himself playing the chromatic scale for YouTube.

It's all part of James Pellerite's quest to turn people on to what he calls the Native American flute's "magical expression."