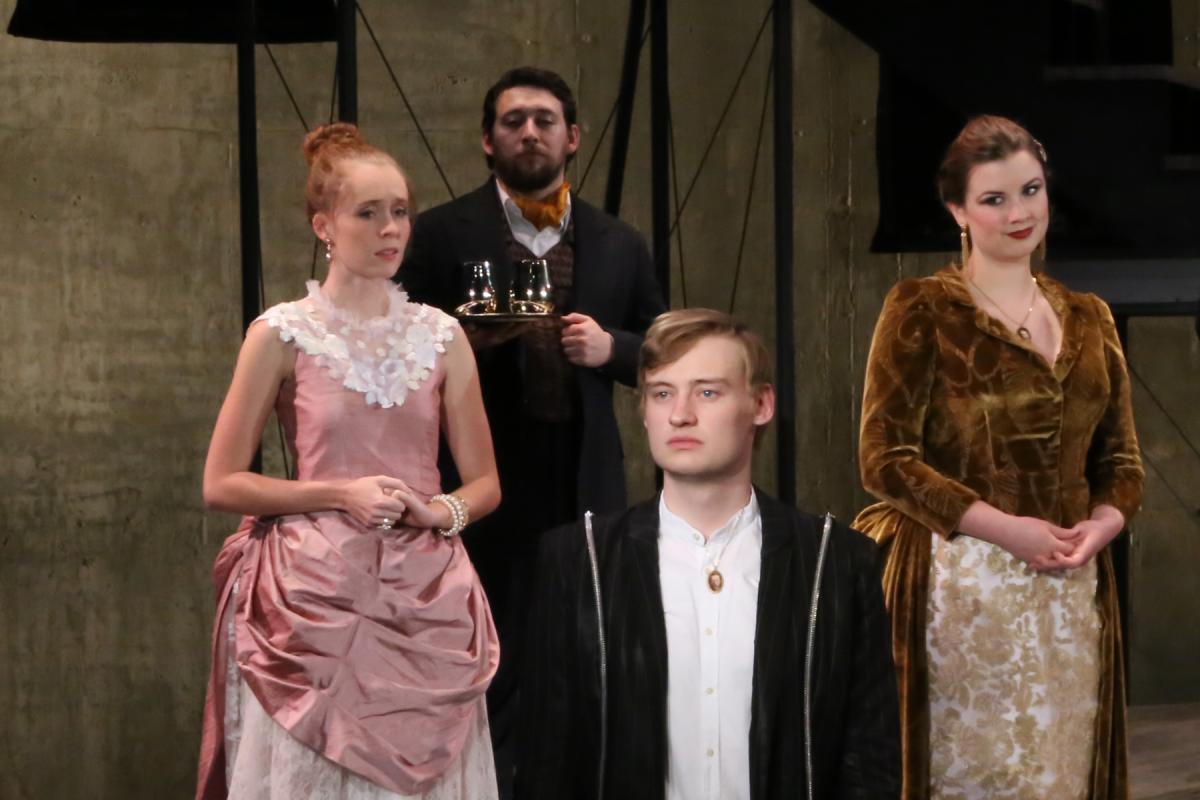 The IU Department of Theatre & Dance offers Shakespeare's Hamlet in the Ruth N. Halls Theatre December 6 through the 14th directed by Jonathan Michaelsen. As I sat during the production each scene, each character's speech seemed to offer a key moment to build on.

For an audience used to television drama, forty-five minutes into the play it seemed that Hamlet, Michael Bayler had more than enough information to finish off his uncle, King Claudius, Daniel Meeks. Hamlet's own suspicions had been powerfully supported by the quite specific words of a ghost. It didn't happen.

Later Adrianne Embry as Norway's Fortinbras's, willingness to sacrifice twenty thousand for a meaningless piece of current Polish soil seemed to resonate with the present mapping of carnage by Russia in the Ukraine.

Faculty member, Nancy Lipshultz's showed picture perfect diction as Polonius, as she gave sound advice to her son Laertes, Felix Merback and rather more cautious ditherings to her daughter Ophelia, Anna Doyle. They were models of balanced serious and comic dialog.

Near the end, Christopher Plonka and Carolynn Stouder as gravediggers number one and two showed just how funny Shakespeare could be when he wanted to.

At the finale, surrounded by the bodies of Hamlet, Laertes, King Claudius, Queen Gertrude and with the news that Rosencrantz and Guildenstern are dead, the tall, Glynnis Kunkel-Ruiz-no stranger to graceful trouser roles- in case we missed anything, sums it up.

"â€¦Let me speak to the yet unknowing world how these things came about. So shall you hear of carnal, bloody and unnatural acts, of accidental judgements, casual slaughters, of deaths put on by cunning and forced cause, and, in this upshot, purposes mistook fall'n on the inventors heads.

Christopher Mueller's open set of multi railing levels, a slanted main space and upper gallery for the watch and the audience for the players worked nicely. Justin Gannaway's costumes with the bustles for the ladies and the more military look for the gentleman were colorful. Mitch Ost's lighting always showed us where to look. Andrew Hopson's percussive sounds were just a bit jarringly out of period.

In Shakespeare's time men would have played all of the roles. It's no surprise that the IU production is pretty well, split. For the leads, it offers a mother Polonius, with interesting mother son and mother daughter tensions. Hamlet's friend Horatio is a woman. Fortinbras, Adranne Embry, the eventual king of Norway and Denmark is played by an African American woman. Rosencrantz and Guildenstern, the Danish Ambassadors, the soldiers on the watch and the gravediggers are all played by male female pairs.

In IU's production, I loved Isabelle Gardo as Gertrude's account of Ophelia's drowning, but I always thought that Anna Doyle's Ophelia must have been a bit unhinged prior to the play. Michael Bayler's Hamlet was mostly convincing, especially in his monologues, occasionally he seem just too happy and I kept wondering why he late in the play, put so much stock in the King's reaction to the players.

IU Theatre & Dance's Hamlet in this smoothly thought provoking production directed by Jonathan Michaelsen plays through December 14th. Over the years I've seen, read and reread Hamlet. It still puzzles me, but I love to have another chance to see it on the stage.

At the theatre for you, I'm George Walker â€‹