IUCA+D Dares Columbus To Color Outside The Lines 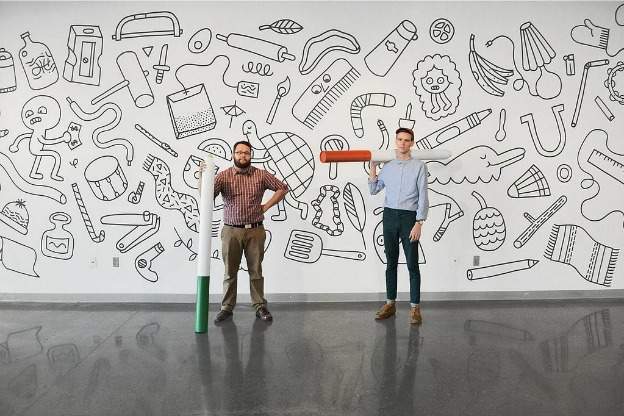 Since opening in October 2011, the Indiana University Center for Art and Design-a partnership between IU and the Community Education Coalition of Columbus-has been offering design courses to IU students and community members. The center also houses a large, attractive gallery space, dedicated to hosting shows that acknowledge Columbus's significant place in the history of design, and nurture a new generation of designers.

As might be expected in a center for design in a design-rich town, a unity of form and function permeates the operation. Its educational mandate is reinforced by the interactive tenor of many of the exhibitions it hosts, including the multi-media collaborations Exquisite Corpse and YUYU Columbus.

Even IUCA+D's physical plant is consistent with its mission.

Located on Jackson Street in downtown Columbus, IUCA+D's spaceÂ rose from a remaining section of the old Columbus Commons after that structure was largely demolished in 2007.Â Â A 1973 construction,"the original Commons was an attempt to bring activity back to downtown," relates architect Louis Joyner, whose firm transformed the remaining section, "but it was done in the early 70s, so the aesthetic and ideas about buildings were that they were highly introverted. "

The most recent wave of urban renewal in Columbus, however, operates according to a more extroverted model.

"Buildings activate the streets and streets activate the buildings," Joyner explains, "and when you get those things working together you get active, lively downtowns.Â That's a value that Columbus has been trying to bring back."

So Joyner's design for this repurposed portion of the old Commons encourages much more communication with the outside world. Classrooms and exhibition spaces have been placed on the street side, with large windows yielding views in both directions, "so people would know that things were happening," as Joyner puts it.

"It's an icebreaker," suggests T. Kelly Wilson, director of the IU Center for Art and Design. "It's to announce that a new element is in the town."

Wilson is describing the current show at IUCA+D, but he might as well be describing the center's mission, "to intersect the lives of designers and artists and to extend design and its creative impulses to a community."

That the community in question is Columbus, Wilson asserts, is particularly fitting, because of its rich design legacy.Â "Of the top five buildings in the world," Wilson elaborates, "two of them are here.Â The spirit that made that happen still exists."

To coax that latent creative spirit out of the current population, Wilson has been curating exhibitions at IUCA+D that turn art viewers into makers.

"The subversion of the gallery space for this project is very interesting to people," speculates illustrator and designer Andy J. Miller, whose collaborative installation with Andrew Neyer, Color Me _____, is currently on view in the IUCA+D gallery. Â The duo has been creatingÂ interactive installations together since 2011, in Cincinnati, New York and Indianapolis.

The installation's first order of business is to banish the concept of the clean white box that has served for decades as the default setting for the contemporary gallery.

For Color Me _______ , the artists have covered three white walls with cartoonish drawings in thick black line of readily identifiable objects and creatures, with a few oddities thrown in.Â A leaf, a piece of pizza, a unicycle, a snail, and countless other icons inhabit a dimensionless inventory on the wall, which becomes a giant sheet torn from a coloring book, as if drawn by Keith Haring.

The "markers" are actually five-and-a-half-foot columns with spongey tips, that visitors tote with both arms, first dippingÂ the tip into paint before raising the hefty pillar to the wall. The unwieldy implement precludes the consideration of skill, as it is conventionally defined in the fine arts or crafts.Â The hand is, more or less, disabled, disguised.

"It levels the playing field," Miller acknowledges.Â If that effect is not achieved by physically hobbling the artist's hand, it is completed by the evocation ofÂ an artistic trope buried deep in most of our memory banks.

"You know, everyone can relate to the coloring book," Miller asserts.Â "Everyone has been there before."

Back When Art Was Fun

Recalling his childhood as a "coloring book rebel", gallery visitor Adam LeClerc is busy painting a hairdo on top of a cartoon head on one wall.Â "Apparently there is no rule about drawing outside the lines," LeClerc claims.Â He remembers that as a child he would sometimes change the backgrounds of his coloring book pages,and often added auxiliary characters.

But not every child is so rebellious. Some of us suspect that coloring books might encourage obedient children to be even more so.

"My father absolutely refused to buy us coloring books," sharesÂ Columbus Area Chamber of Commerce President Cindy Frey, watching her own daughter mark up the walls.Â "He believed that they stifled creativity."

"You do get that initial coloring in the lines and template thing that happens," concedes Miller, as he's watched the murals in other locations take shape.

But in time, he notes, the template serves as a jumping off point.

And as they become more comfortable, Miller notes, "it gets a lot wilder."

What the artists have observed is that by the end of the installation, none of the original lines on the wall might be visible. The finished mural might "look like Basquiat and Kandinsky made a collaborative painting," exclaims Neyer.

With any luck, the coloring book's rigid organization of inside and outside is collapsed, and along with it, IUCA+D director Kelly Wilson hopes, the divisions between artist and spectator, gallery and community.

"A lot of contemporary art has a bona fide experience to it," Wilson asserts, "but a lot of people don't know how to be open to it.Â So how do you remove those boundaries, to allow that experience to be had? This is certainly one of the ways."