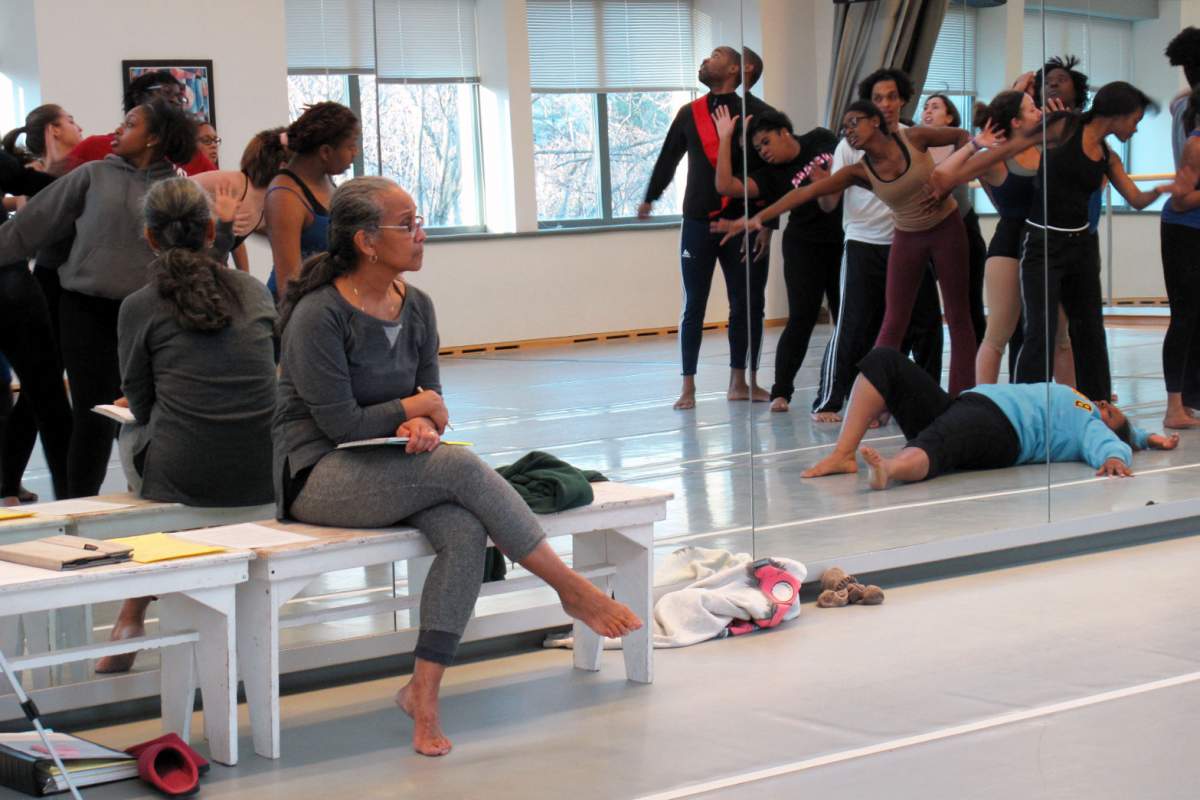 The Showalter House is a brand new building.

And, Herman Hudson establishes the African American Arts Institute, home of the new African American Dance Company (AADC). Iris Rosa, who received a masters degree from IU that same year, was named the dance company's first director and she's been in that role ever since.

The energy level is high at today's rehearsal of the African American Dance Company. The student dancers are fine-tuning the choreography for their performance of Death In Harlem, a poem by Langston Hughes set to music by Kenneth Ware.

Junior Joshua Holland is taking a breather. He's a psychology and neuroscience major who has danced in the AADC all three of his years at IU. "It has helped me evolve and get involved on campus," he says.

Holland, like many current and past members, had no dance background when he joined the company. He credits the group's director Professor Iris Rosa ("ProRo" to her students) with being his mentor both in the dance studio and out. "Some of us look at her as a dance mom, because she's always there to help us out and gives very very good advice," he says.

Death In Harlem will be performed as part of a concert celebrating forty years of the AADC, all of those years under the direction of Rosa. Organizers are expecting alums from as far back as the mid-1970s to flock to Bloomington to celebrate the milestone.

Neely is now the regional development director for the United Negro College Fund. She says Rosa was a demanding yet compassionate teacher. "And she was the balance that students often really need to have when they are transitioning from high school into college."

That has always been the challenge, is how people have a preconceived notion about who we are and what we do.

In Rosa's office, pictures and news clippings hang on a large cork board.

She points to one image, "My mentor, her name is Mildred Morgan-Ball," she says. "She was the first one to introduce modern dance in the East Chicago school system," which Rosa remembers from her childhood as being a very ethnically diverse area. "The commonality was you come in here and you learn dance, from wherever you are," she says.

That's the same attitude she brings to the AADC, which is also a multi-ethnic group.

While her training is in modern dance, she's always been interested in dance from a diasporic point of view incorporating elements of Caribbean and African styles.

But, she dodges any question that asks her to categorize her choreography. She doesn't want the group to be defined by one form of dance or another. "That has always been the challenge, is how people have a preconceived notion about who we are and what we do. That has never changed surprisingly. For the last 40 years, I've always fought that," she says.

Over the years, she's also had to prove that a group like the African American Dance Company deserves a place on a college campus. Forty years after its formation, the validity of the company is surely no longer in doubt.

Will ProRo stick around for another decade?

"I keep thinking, you know, I don't want to be here for my fiftieth," she says. "I'd like to do some other things!"