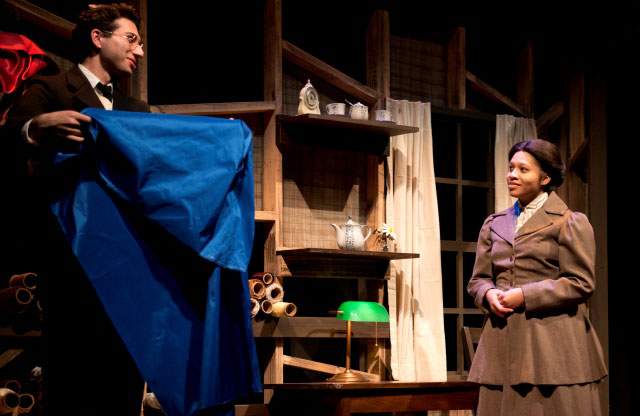 The moment that you walk into IU's Wells Metz theater for Lynn Nottage's Intimate Apparel, set designer Ryan Gleason prepares you for a rich and varied evening. It's a deep multi leveled set with a riot of deep colors and varied textures. Mrs. Van Buren's uptown boudoir is up on the left. Miz Mayme's Tenderloin parlor is up on the right. Still higher across the back is the fabric shop of Mr. Marks. The heroine, Esther's simple room with her sewing machine is front and center.

Jessica Turner played Esther, a dignified hard working seamstress whose talents for the intimate apparel of the title take her uptown to the upper class ladies and downtown to the working girls of the Tenderloin. Throughout Turner does a lovely job of playing this shy but resolute lady. The play follows the story of Esther's courtship by letter with a worker on the Panama Canal, their meeting and marriage.

Ian Martin played George Armstrong, the canal worker. With each letter that he recited to woo Esther , both his eloquence and his dress improved. They do meet and marry, but sadly the warmth of the letters seems to melt away. Martin was a master of George's early sunny moods and the later darker ones.

Andrea Mellos played Mrs. Van Buren, one of Esther's upscale clients. She is actually excited that the undergarments Esther makes for her are the same as she makes for the ladies of the night. She helps Esther with the letters to George. In Mellos's hands the lady is not ill intentioned or unreflective. She's a complicated figure who's a bit selfish and a bit silly.

Esther's other client is one of those Tenderloin ladies, Miz Mayme playd by Jasmine Traylor. Like Mrs. Van Buren, Mayme finds it interesting that other share Esther's designs. Perhaps she sees a bit of irony that the Esther's creations that she sports as working clothes are worn inside by others. Traylor's Miz Mayme like Mrs. Van Buren is not unthoughtful, but there's a bit of the same stubbornly doomed lack of awareness about her world.

The third place that Esther visits is the fabric shop of Mr. Marks, David-Aaron Roth. Although Marks is an orthodox Jew, who studiously avoids actually touching Esther, a certain attraction grows out of respect Roth does a nice job of subtly showing it.

Tonik Boyd rounded out the cast as Esther's sympathetic and curious landlady. The costume designs from Panama to New York and from uptown to down town and are by Katie Cowan Sickmeier.

Guest director Ron Himes, the founder and Producing Director of the Saint Louis Black Repertory Company, has arranged a nicely moving production with strong efforts from his actors in a story with a number of thoughtful insights and surprises.