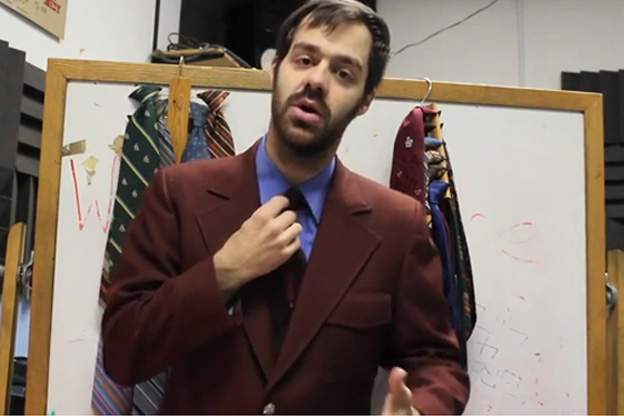 Two years ago, Bloomington filmmaker Eric Ayotte created the monthly Instant Gratification film challenge as a way to encourage people to make short films without all of the money and planning of more formal filmmaking. The films range from silly to touching, and many are made by first-time filmmakers.

Every month Eric chooses a theme, sends it out on Facebook, and encourages people to make a movie, any kind of movie. The only requirements are that it has to be less than five minutes long, and you only have a month to do it. At the end of the month, he has a public screening. Instant gratification.

The one-month deadline is actually a creative pressure cooker for the filmmakers. "The problem with Instant Gratification is the more time you give people, the less productive they tend to get," Eric says. "So if you're expecting them to make something really unique and quick, you actually have to give them less time."

Eric even produces films of his own for the challenge, which means he's made a short film every month for the past two years. Sometimes they are funny takes on alternative culture, like a mockumentary he made with friend Paul Baribeau about going on a juice fast, called "Juice Your Own Adventure."

Other times, Eric's busy life catches up to him and he just has to make it work. One film, called "Apology," starts out with the line "Hey everybody, it's Sunday. Yet another month goes by where we wait 'til the last minute."Â The film goes on to produce a single site gag, and then it's over.

But rather than a failure, the film is completely in line with Eric's philosophy: don't wait for a great idea, just produce. What he wants more than to see a great film is for people to start making films, period. And to stop taking it so seriously.

It's important to note that the Instant Gratification challenges are not competitions. Eric hopes that these challenges and their no-pressure vibe will help create a community around do-it-yourself, or DIY, film.

In many ways, the DIY film scene is still in its infancy-while DIY music and zine culture have taken off, there is still some skepticism around the idea that just anyone can make a creatively successful film.

"It's easier to communicate to people who have never made a movie that they could do that. They're not already convinced that making a movie takes months, time, and years," Eric says.Â "And then there's the extremely unique creativity that comes out of somebody who's never made a movie before."

The key for Eric is that rather than mimicking the Hollywood aesthetic without the ability to replicate Hollywood production values, these filmmakers are creating their own DIY aesthetic.

"The films that I see within the movie challenge and within the DIY scene have been written in the beginning knowing their strengths and weaknesses, so in the end it's this really cool short film that communicates a lot and is really impressive on its own," he says.

A lot of the films are made with a wink and a nod towards pop culture, like the film "Maya," done in the style of a BBC documentary exploring the origin of skateboards.

Many of the films are hilariously funny and often pretty silly, but some are quite touching. Ginger Alford's documentary about searching through her floppy discs, looking at old files she once thought important, touches on ideas of memory, changing technology, and how nice it can be to forget. Alford's documentary sticks out in Eric's mind as an example of the power of DIY filmmaking.

By and large, these filmmakers produce their unique and creative films with cell phone cameras, webcams, and consumer digital cameras. All on their own, or with friends.

So, if you've ever wanted to make a movie, what are you waiting for?