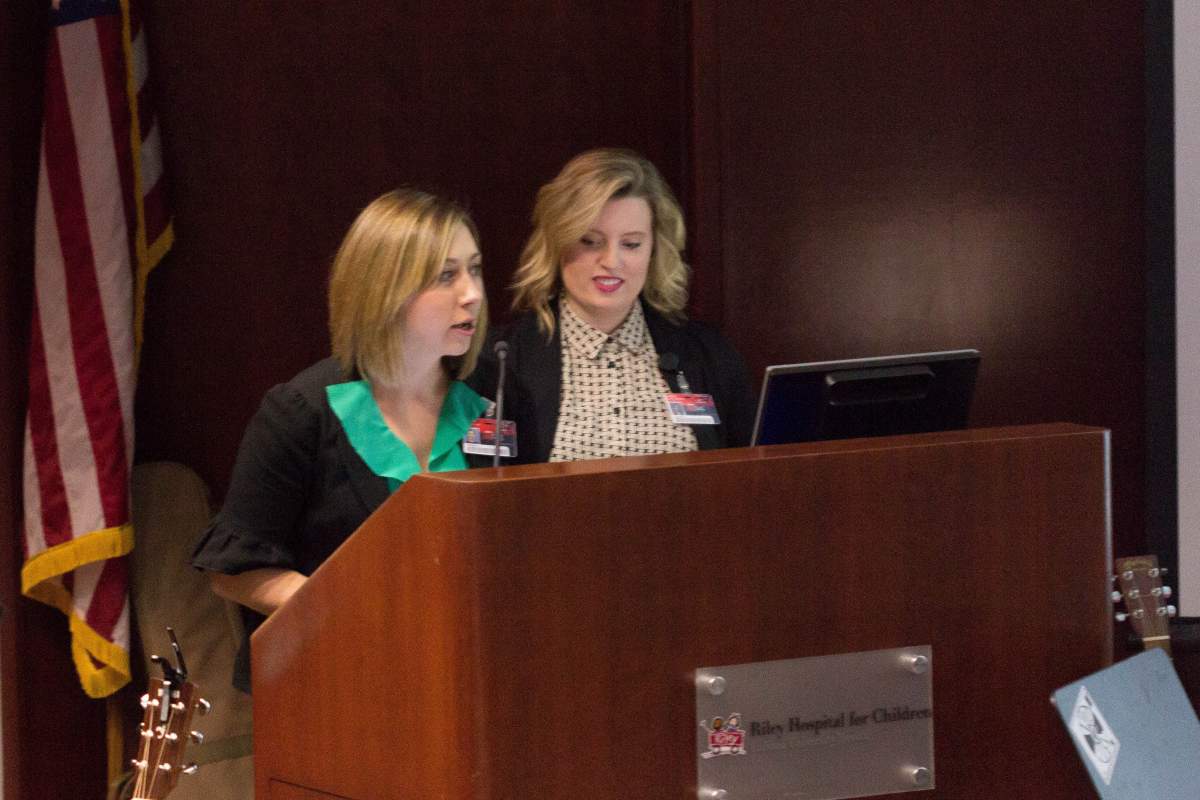 Gathered in a small auditorium at the Indiana University Health Riley Children's Hospital, a group of board certified music therapists have handed out drums and other percussion instruments to children and their families. The therapists begin a steady rhythm, and ask the attendees to first try to match the beat, and then to improvise a rhythmic pattern over the established rhythm.

The drumming quickly dissolves into a din, but as this happens, the parents' faces are lighting up. This particular demonstration is part of an event called "Indy Sings: A Music Therapy Experience." It's showing how music therapy-and the rhythmic component of music specifically-can help children on the autism spectrum practice motor coordination and personal expression.

The event included many different demonstrations for the children-like sing-alongs of well-known songs like "Don't Worry Be Happy" or the recent YouTube sensation "What Does the Fox Say?"-each followed by a brief description of the specific music therapy techniques used in the demonstration for the parents.

When the event started, the music therapists began with a song they called the "Hello Song," designed to assist in communication. The melody and lyrics were simple and welcoming, inviting the participants to "have some fun today."

Caitlin Krater, a music therapist and graduate student at IUPUI, who also helped to organize "Indy Sings," said that the "Hello Song" helped one of her clients who had social development issues in real life.

"[He] had never said "hello" unless he was prompted," she said. "We started singing this â€˜Hello Song' and it got inside of him, and so he was at the grocery store and he started singing â€˜Hello' to the cashier. It's just those little things that transfer over to saying â€˜hello,' and then understanding what that means."

So, what is music therapy? There's often some confusion. It's not just about performers using music trying to help people with disabilities or other ailments. It's an established health practice that's been around for 60 years with licensed professionals, and what it can accomplish depends on the patient.

"Some of the most amazing things that have come out of therapy sessions are purposeful speech, learning to sight read words, a lot of language development or social skill enhancement," said Amanda Henley, a research associate at the IU school of nursing, and one of the coordinators of the "Indy Sings" event.

Kate Myers-Coffman, one of the music therapists at the event who works for Noble of Indiana, said one of her clients had trouble communicating. Most of the people that had worked with him before she started using music therapy mentioned that this client did not talk much, even to communicate his wants and needs.

"I just tried singing songs to see if he knew any lyrics," Myers-Coffman recounted, "starting off with some traditional folk songs or children's songs, because that's the one that they know the lyrics to the most. Then I started doing some Motown, and he knew all the words to Michael Jackson, and all the words to Temptations songs."

From there, she began to teach him the names of instruments and continued to sing the lyrics to songs. This progressed quickly to the point where he began to express himself verbally, and express his wants and needs in full sentences.

"Nobody realized that he had this within him," Myers-Coffman said. "He does pre-vocational work too, and I had some of his workers come up to me and say â€˜I didn't even know he could talk!' Music therapy hit a nerve with him that made him able to express himself, and now he communicates to everybody."

The "Indy Sings" event focused specifically on using music therapy as means to helps children on the autism spectrum. After the event was over, the parents were able to inquire with the different organizations about music therapists available in their area.

For instance, children with autism often have trouble communicating emotions. Music can engender strong emotional response, so performing or interacting with music can be a child's non-verbal way of expressing emotion.

Her organization also works with people with other developmental disabilities, including Down syndrome, and cerebral palsy, addressing some of these same issues with those populations.

"With music, people are motivated to work on the therapy," she says. "but you also get cues for your brain, so you have the neurological component."

Knowing the neurological aspects of how music works is important for music therapists to decide which treatment to use. For instance, imagine a patient who's had a stroke on the left-hemisphere of their brain, that's the area where speech is produced, stripping that person of their ability to communicate.

Music therapy has been known to help patients with this exact problem, because of the specific way that music works within our brain.

The music therapists that I talked to mentioned that their outreach had another important goal: state advocacy. Currently, there are only 3 states-North Dakota, Nevada, and Georgia-that have state licensing for music therapists.

That's something that Wright, as the President of the Association for Indiana Music Therapy, is working towards. "We've had a couple legislative efforts and put out a couple bills. We've been looking to increase access to music therapy, but also we're looking for state recognition. We would like to protect the practice and the title of music therapist."

Protecting the practice means making it easier for licensed and trained music therapists-rather than say, music performers with good intentions-to work with clients in hospitals or other care centers, ensuring that patients can get the kind of treatment they really need.

Krater mentioned that the way we interact with music in our daily lives makes it an excellent medium to reach different patients.

"When do you find yourself using music" she asked. "Do you find that when you're having a stressful day you put on some of your favorite tunes? That can bring you to a different place. It has this ability to not only affect our mind but our entire spirit, our bodies, in a way that a lot of other things don't."

Henley added that music is also accessible and non-confrontational. "It's not scary," she said. "people enjoy music. There is some type of music that everyone can enjoy."