Behind The Scenes At The Indiana Heritage Arts Show 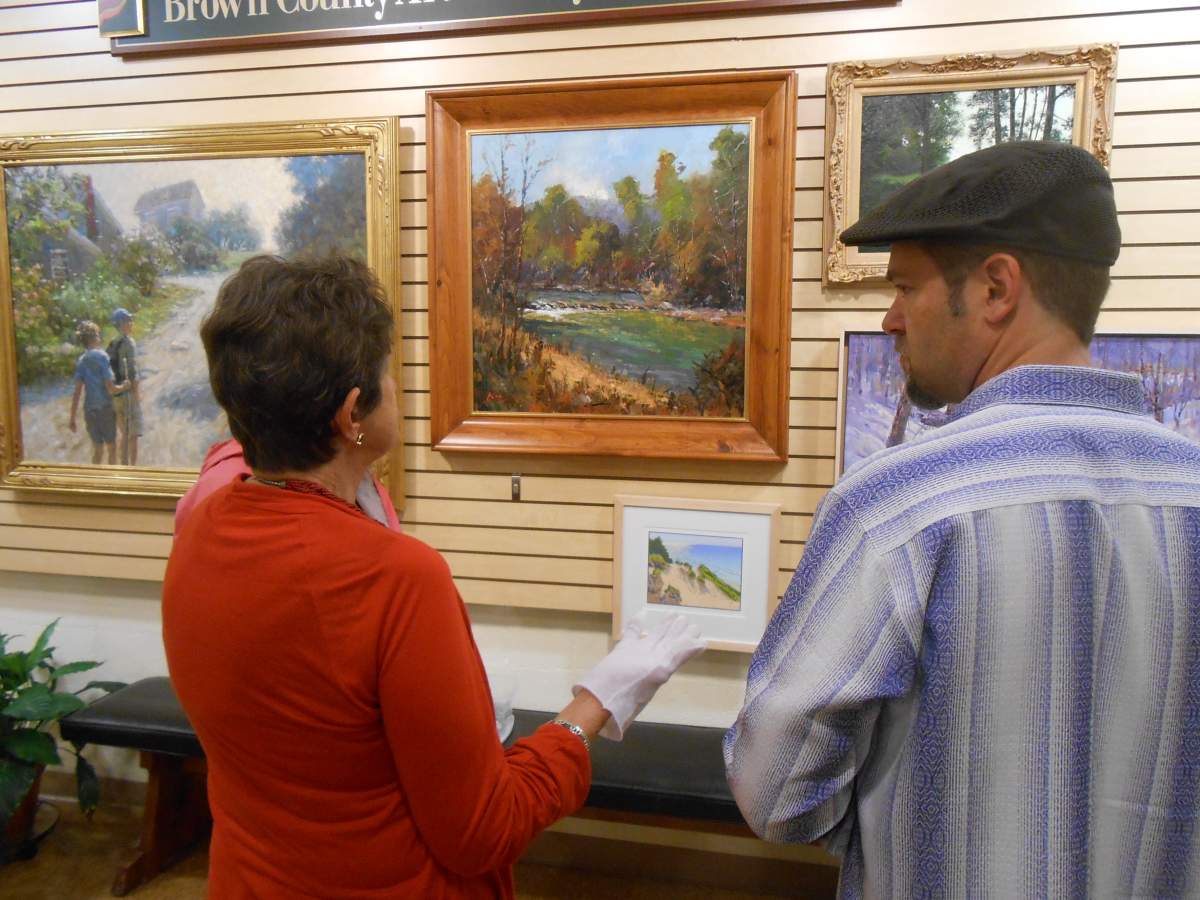 It's Monday morning, June 1st, and the Brown County Art Gallery is buzzing with activity. Members of the Indiana Heritage Arts board, some clad in white cloth gloves, are moving paintings around and sharing observations. Board president Kathy Anderson is keeping close tabs on the spreadsheet on her laptop.

"We're at 185," she tells the judge. That's down from a total of over 340 submissions to IHA's 37th annual juried exhibition, which showcases traditional works of art by Indiana-based artists. Although the show is held in Brown County, it encompasses artists from around the state.

"About two-thirds get cut; it's very selective," explains Indianapolis art dealer Jim Ross, who is the director of the show. "So it's quite an honor to get in."

We're collecting for the future. Contemporary artists that will be tomorrow's historic artists.

The approximately 120 oil paintings, watercolors, pastels, and works in pen and ink that will make the final cut span the gamut of representation-from gestural impasto to brushless photorealism. There are still-lifes, interiors, figures, and plenty of landscapes, including scenes that take us far beyond the Brown County hills to the Pacific coast, for example, or Venice. Pure abstraction is not proscribed by the show's guidelines, but everyone agrees that it's not the sort of thing that shows up here.

Although the board is very involved this morning, who's in and who's not all comes down to one person, ultimately.

"They're leaving it all on me," James Richards shrugs. The judge, who teaches at the Atlanta Fine Arts Academy, was brought in to cull the work and award the top honors. 21 paintings will be awarded cash prizes totaling about $20,000.

In making his determinations, Richards refers to time-honored formal principles. "The language of paint breaks down into just a few fundamentals," Richards explains. "Good drawing, good shapes, good color, composition, brush quality, paint application. Those things are very readable, which ones are strong, which ones aren't. That crosses the board in all types of genres of work. Trash cans down an alley, or a beautiful vista."

The language of paint breaks down into just a few fundamentals. That crosses the board in all types of genres of work. Trash cans down an alley, or a beautiful vista.

Still, you're not going to see any trashcans in the Indiana Heritage Arts show.

"What we're trying to preserve is the heritage style of painting," explains board member Rick Kelly.

"Our real general mission is to serve artists," elaborates director Jim Ross, owner of Eckert Ross gallery, which deals in historic Indiana artists such as T.C. Steele and William Forsyth.Â "One way is to provide this venue for them to show their work and get it in front of the patrons and collectors."

At the same time, Indiana Heritage Arts is building up its own permanent collection, Kelly explains,

"We have now 15 paintings and so we'll do this year a director's purchase award, so from this show we will purchase a painting. We're collecting for the future. Contemporary artists that will be tomorrow's historic artists."

Making the determination about who tomorrow's historic artists are seems to come fairly effortlessly to the members of the IHA board. "We usually all just wander around during the set-up and while the judge is judging and decide what we like," explains board member Pat Lloyd. "And then we get together at the end of the day and discuss them and try to come to a consensus about the one painting we're going to get."

The decision about which painting the IHA will acquire for its permanent collection is distinct from the selections the judge is making. The day is still young, but board member Donna Tackett already knows what won't make the cut when it comes to the IHA's acquisition. "We wouldn't pick out something contemporary," Tackett explains, "because that's not us."

Meantime, on the other side of the gallery, judge Richards has found a modern masterpiece. He homes in on C.W. Mundy's Point Lobos, California Coast. "You could zoom in on any spot in this picture, and there's a picture within," he notes. "There's a sophistication to the paint application. There's texture variety, color variety." The fact that the painting represents a seascape never figures in Richards' estimation of the painting's mastery. "You could see a completely abstract painting there that speaks volumes."

Tackett and Lloyd have found some their favorites, too. One canvas depicts a team of horses, pulling a carriage. (It bears mention that, by this reporter's count, exactly one painting in this show of contemporary pictures acknowledges the existence of motorized vehicles.) And there's a still-life they're leaning toward, as well.

"We like this floral because it has so many details of the interior setting of the window and the books," Lloyd explains. "The warm colors are so pleasing to the eye."

"It would go well in either of our homes, too," Tackett admits. Both Lloyd and Tackett, along with most of the IHA board members, collect art and antiques.

By the end of the day, the hundred plus paintings that will hang in this year's Indiana Heritage Arts show have been selected, as have the award winners, and the IHA's acquisition. As it turns out, there's a far greater affinity than could have been anticipated between the judge's choices and those of the board. Richards awards best in show-an award worth $5000-to Forrest Formsma's Spring Carriage Ride, the canvas so admired by Tackett and Lloyd. Second prize goes to to C.W. Mundy's Pacific seascape. And third prize goes to Diane Lyon's Peonies. Although the still-life is a different one from the one Tackett could see in her home, it's the one the IHA will be acquiring for their permanent collection.