By Annie Corrigan and Yaël Ksander 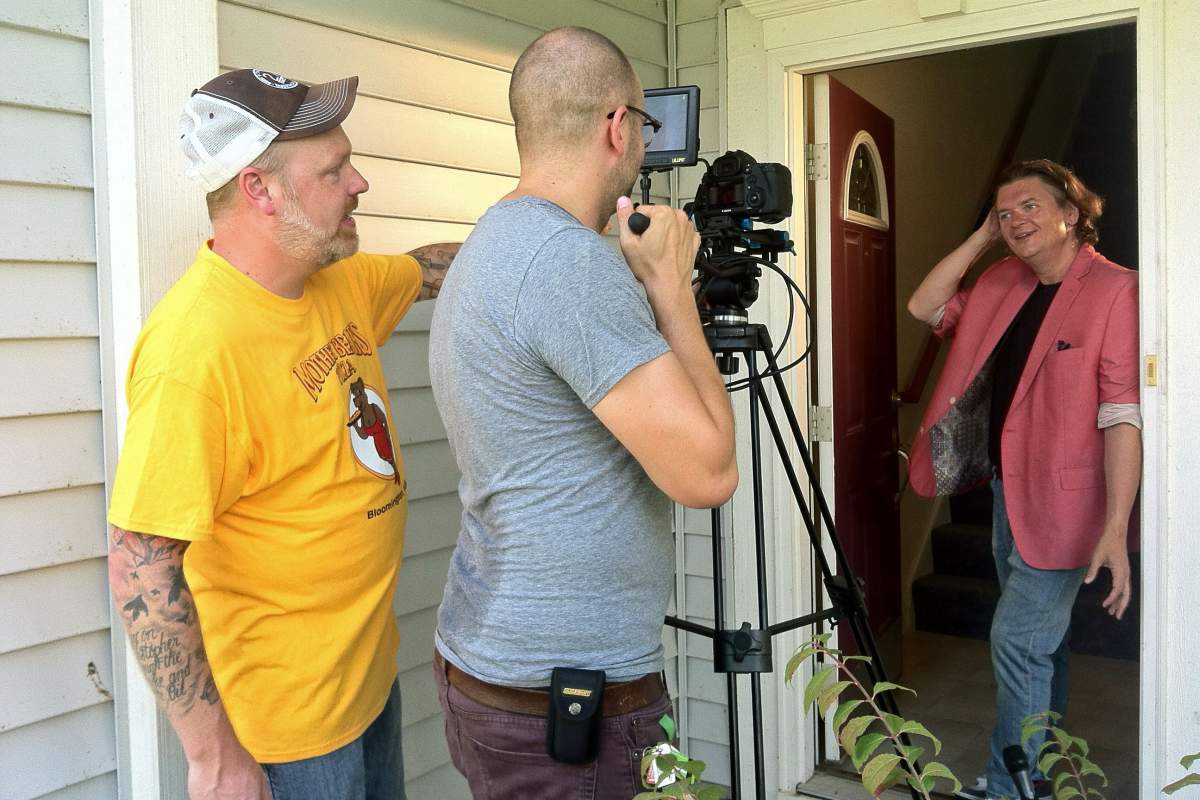 Long before a movie can become riveting or provocative, it has to get made; and that, explains Matthew Levandoski, is a laborious process.

"Probably the biggest thing about making movies, as far as time-consumption goes, is set-up. Like, so much set-up!"

Today, Levandoski has been dealing with even more set-up headaches than usual. He's working as the cameraman on a comedy short directed by Mat Alano-Martin. The location they had planned to use suddenly became unavailable, but a buddy offered his house at the last minute.

"It's like, we had one and then we didn't have one, and now we have one again. And that's kind of the beauty of making films here specifically in a smaller community like Bloomington everyone just kind of steps up."

More than any specific element of the local scenery or some tax incentive, it's that friendly vibe Levandoski cites as the reason Bloomington is a viable place to make movies. Having grown up in a small town in Manitoba, Canada, the filmmaker eventually moved to Bloomington when his wife Jessica started grad school. They stayed.

"Grow where you're planted. I know that's a cliche, but that's kind of my attitude wherever I am, and if I was living in Los Angeles or Manhattan, I would feel exactly the same way."

In Bloomington, Levandoski has found enough work on other people's movies to keep financing his own. And last year, Jessica Levandoski co-founded the Middle Coast Film Festival, screening independent films from near and far.

Southern Indiana specifically I think is the heart of that joke, and the joke a lot of the time stems from the fact that people either make horror films or faith-based stuff, and I don't want to make either.

"I think what Jess and Matt are doing is very smart," says filmmaker John Yost. He is returning for Middle Coast's second year for the screening of his new short.

"Having a really enjoyable, tight-scheduled festival that shows off local stuff and the folks they admire and would love to have in the state working on their films."

Folks like Yost, for example. The New York-based filmmaker came to Bloomington for the first time in 2014 for the screening of his feature White Creek at the first Middle Coast.

"Being there for four or five days and feeling at home in that space, a lot of things clicked." It didn't take long for Yost to decide to make his next picture in Indiana.

He found out that Indiana's scenery would provide the perfect setting for what he's calling his psychedelic road trip film.

Even the feeling of the summer night matched the tone he is hoping to strike in the film.

"We were driving in late, and just the sound of the insects in the night, driving that stretch from Indianapolis to Bloomington, was really kind of cool."

Creating A Culture Of Film

But it wasn't Indiana's forests or cicadas that ultimately convinced Yost to shoot his next film here, rather, something more intangible.

"I'm getting this vibe that Indiana wants filmmakers to come to the state. In my experience, feeling good about a place mixed with enthusiasm from folks that want to help you make a film, then that's where you go and make a film."

And not necessarily because of the location's serviceability as some cliché of the Heartland. The perfect setting for movies like Footloose, say, or Children of the Corn.

"Southern Indiana specifically I think is the heart of that joke," says Levandoski, "and the joke a lot of the time stems from the fact that people either make horror films or faith-based stuff, and I don't want to make either."

The movie Levandoski is shooting today isn't set in a cornfield, a barn, or a church, but on the front steps of a typical house in a Bloomington subdivision. It's the location they came up with at the last minute, but it works.