A More Than Decent, "Indecent" 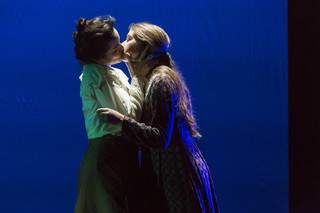 Indecent at Indianapolis's Phoenix Theatre is an award winning work by Paula Vogel. Bloomington and Indianapolis theatregoers may remember Vogel from How I learned to Drive.  She describes this piece as "The Story of a Little Jewish Play." That play is Sholom Ash's The Vengeance of God, from 1906.  It's a work set over a brothel and featuring a lesbian affair. The main character is a wealthy brothel keeper married to his former madam. His pure daughter falls in love with one of his prostitutes

Seven actors directed by Martha Jacobs play a variety of parts to tell the backstage story of the production and its successful  progress through the capitals of Europe to New York's lower East Side in the 1920s.  The crises for Ash's play occurs in 1923 with the attempt to translate it from Yiddish to English and to move the show uptown. One of actor Bill Simmons' many characters counsels that the Broadway audience coming from out of town will find the prostitution titillating, but run screaming from the two women kissing.

The company feels that the intimate scene of love is vital to the truth of the play. They find it so moving that they watch it each night, but it is cut. Despite overcoming the difficulties with the language and the cuts, the original opening did lead to jail for some members of the cast.

Director Martha Jacobs' cast anchored by Phoenix's new producing artistic director Bill Simmons features three Phoenix veterans familiar to Indy audiences and three from IU perhaps more familiar to visitors from Bloomington. Mark Goetzinger plays the gruff brothel keeper and later the elderly Sholom Ash. Jolene Moffat is his sturdy companion and does a nice little cabaret number for their Berlin visit. John Goodson is quite the actor of all work, most often appearing as Ash himself.

The three from IU were all in last year's Summer Theatre in Bloomington. Nick Jenkins plays the ever clumsily charming Lemml as a reluctant member of the company. The warm spirited Abby Lee is the young prostitute that the brothel keeper's daughter falls for. Courtney Spivak is ever so appealing as the pure young daughter.

Playwright Paul Vogel has said, "A writer writes the script, the director, designers and cast write the production, and each audience member writes their own play through their experience." Director Martha Jacobs is aided by music direction from Brent Marty, the flexible open scenic design and audience cue cards from Phil Male, the varied costumes of Brittany Kugler and the lighting that makes all of them happen by Jeffrey Martin. Jacobs is especially happy to thank her daughter Esther Widlanski for choreography.

A final thought…just when the stage and the actors returned to the opening setting and we thought that our experience of the show was all over… rain began to fall,  Abby Lee and Courtney Spivak rose and the scene that we'd never seen, the  love scene that had entranced the cast and was cut from Broadway played out.