I Am You: Improvising Empathy 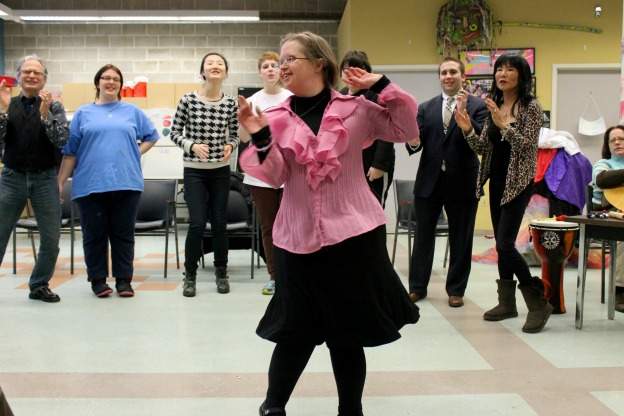 Lee is sharing a story with a troupe of fellow actors gathered in the rehearsal studio at Stone Belt, a provider of services for individuals with developmental disabilities living in south-central Indiana.

"This is a true story,"Lee explains, "so I guess I have to pick someone to be me, the clown."

"Sure," Â responds drama therapist Michelle Yadon, "who would you like to be you, the clown?"

"Brandon can be me," announces Lee.

"So Brandon, you are going to be Joe," Yadon tells Brandon Kerfoot, "so be listening very carefully to his story. Joe, go ahead. "

" The clowns would sit behind the tent listening to the performance, waiting to go in. Rose," Lee gestures toward another actor, "I guess you'll be another clown."

"Do you want to give Rose a clown name?" asks Yadon.

"My clown name was JolÃ©," Lee explains, "so Rose can be 'Roy'. 'Roy T. Clown'." Lee keeps assigning roles to his fellow troupers until he reaches the end of his story. Â It's the circus, and so there are elephants. Â It seemsÂ JolÃ© became the object of one of the pachyderm's affections. Â When the story is done, Michelle recaps the plot and prompts the actors to recreate it for the storyteller, who sits beside her.

This Is Your Life

As Richard Larraway and Mary Kate Bristow begin to improvise some appropriate background music on melodica and guitar, the actors assume their roles and take positions on stage, facing both Lee, the story teller, and the audience. Â When the ensemble brings the clown and elephant drama to its climax, Mattie McCalla, playing Captain Kline the elephant trainer, declares,

"JolÃ©, I've never seen anything like this before! Â Olla's in love with you!"

"Joe, how was that?" Yadon inquires, as the applause dies down.

Taking Listening To A New Level

A form of theater used by educators, social workers, and drama therapists, among others, the playback technique involves improvising a performance based on an audience or group member's story.

The playback group Yadon is leading at Stone Belt is the only inclusive playback troupe-that is, the only troupe that includes people with disabilities in the United States; and only the second one in the world. The only other one is in Hong Kong, according to Yadon.

"So this is still a very new experience," Yadon explains, "and we've been trying and adapting."

Indiana's only registered drama therapist, Yadon is used to trying new things. In 2008, she worked with nine Stone Belt clients to help them tell stories about their lives that were ultimately performed as I Am You at the Bloomington Playwrights Project. Â Over the next four years, Yadon worked with various adults with developmental disabilities to stage two subsequent showcases of personal, revelatory monologues.

Â For several weeks he's been telling the same story over and over, about his love for the Backstreet Boys. Â But tonight he identified with someone else. Â

The production provided an important opportunity "for the community to see adults with disabilities as people," Yadon asserted, but she sensed there was still something missing from those versions of I Am You.Â In order for the equation promised in the title to add up, the storytelling needed to flow in both directions. Â Incorporating playback could offer that balance, she hoped.

This year's production of I Am You begins with a series of monologues, then adds a second act, featuring the playback theater troupe. During the performance, audience members will be invited on stage to tell their stories, and have them acted out by the troupe.

In the past, "people have come to I Am You, and have Â said 'Wow! I understand now, I know now,'" Yadon reflects. Â " We've broken stigma, we've broken stereotypes, but I feel now we can break it even further!"

Making the troupe inclusive was another way Yadon hoped to break down differences and promote connection.

"When we are in this rehearsal, everyone is working together as a team, and looking at each other as a human," she notes. Â "I wanted it to be a troupe of all people, and I wanted there to be people without disabilities, because I wanted there to be those friendships and relationships in the community. Â I thought it would be more powerful for all of the actors, and those people who would be there as audience members.""

"Michelle was nice enough to let me come out and audition," relates Logan Good,Â a member of the playback theater troupe. Â "I know we were friends, but luckily I impressed her enough, even with my limited background in theater."

"The most important part of playback," Yadon counters, "is not the theatrical ability but the listening and having empathy, and that's how I chose people to be on this troupe. Â Logan possessed the impulse to understand someone's story."

Later in rehearsal, Yadon helps Brandon Kerfoot develop the story of attending his grandfather's funeral. Â Kerfoot speaks haltingly, but Yadon coaxes him to share his feelings about the passage.

"Did you say anything to him at the funeral home?" Yadon asks.

"Brandon, this is such a beautiful story, and I know that all of us out here have experienced some kind of pain like this, and we all appreciate you telling this story.Â Brandon, this is for you, let's watch."

Yadon sat near Kerfoot as the players presented the action he had described. Â "As they see it played back," Yadon explains, "it's a visual of this memory. It allows people to have catharsis, so they can cry, they can laugh. They're able to see it and almost shut the book on that story."

The long-term benefits of the process are significant, Yadon asserts. Â "I see amazing changes. What Brandon shared tonightthat he was able to share thatwas so powerful and amazing and beautiful. That he was able to be assertive. Â He had a build of his communication; he had a build of his insight. Â For several weeks he's been telling the same story over and over, about his love for the Backstreet Boys. Â But tonight he identified with someone else. Â They take what they learn here in active listening and building relationships , and have an increase in positive relationships, an increase of self-esteem, and increase of self-awareness."

The rehearsal ends with Betsy Higgins' feel-good story about a road trip with friends to the Â Selena Gomez concert . Â The story order wasn't planned at tonight's rehearsal, nor will it be in performance, but a natural arc seems to present itself most of the time. Yadon thinks it grows out of the connection that is fostered by the experience.

"We started with something lighthearted, and then we got really deep, but then we had some happy stories. Â It's Â kind of like everyone protecting each other and knowing what the boundaries are."