Old Is New Again At "Impressions Of Brown County" 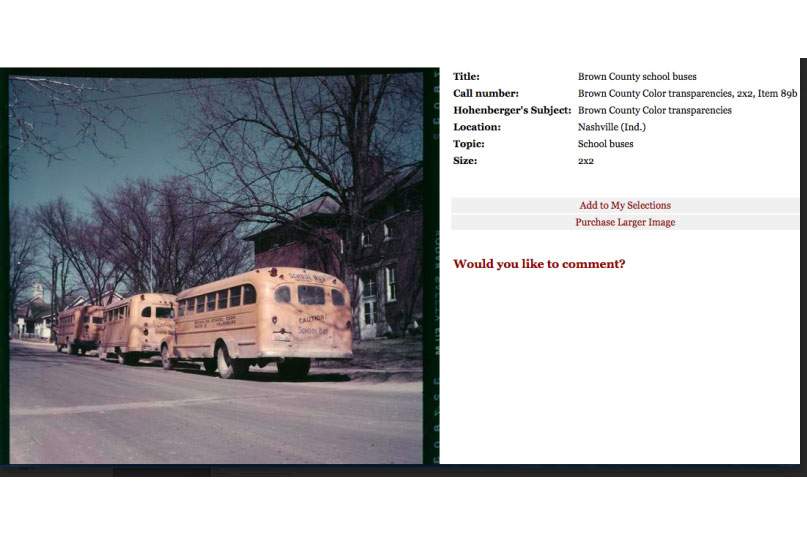 Composer Curtis Smith has only visited Brown County a couple times since moving to the area. His doctoral studies at Indiana University'sÂ Jacobs School of Music keep him busy. He signed on to write music for the Impressions of Brown County concert event not because he felt a strong connection to the area, but because it was a good composing opportunity.

He was tasked with writing music inspired by one of Frank Hohenberger's historical photos of Brown County. "I was thinking I was going to get some old guy holding a fiddle or something you know, but I got the buses," says Smith.

Three school buses actually. We see them from behind, parked on the side of the street. It doesn't say what year the photo was taken, but judging by the look of the buses, probably mid-20th-century.

Smith doesn't normally rely on images for inspiration for his music, so he was initially pretty puzzled. "Then when I looked at the picture a little closer and I looked, it was kind of an older image, kind of classic look to it. And I got thinking about, okay when did I ride on a bus? And that was key to writing the piece."

Memories of his elementary school days in a rural farming community in California came flooding back. He even remembered his daily interactions with Ralph, his bus driver. He thought of Ralph as the audience for this piece, and so he started with a simple melody.

The rest of the piece came quickly after that. Magnolia is what it's called, named after this elementary school, written for clarinet quartet and a small choir of voices.

Artist Colony, Then And Now

Smith is one of a couple dozen performers involved in this presentation, most of whom do not have roots in Brown County.

Photographer Frank Hohenberger was also a non-local who came to discover his artistic voice down in the hills.

Getting out is vital because that's how it is in the real world, and the sooner we start to do that as artists, I think the faster we begin to grow and the better our art will be.

"The idea of outsiders coming into a place that is supposedly an artists' colony and making art with what's there was really interesting to us," says Nora Leahy, co-artistic director of the Brown County Playhouse. She and her fellow co-director Ian McCabe floated the idea of using photos by Hohenberger to Erik Franklin, the organizer on the Jacobs School of Music side.

"One of my teachers actually referred to me as an impresario. I was the one who was contracting the composers and the performers and the venue,"Â says Franklin, who will also be playing clarinet in the event.

He was the one who combed through the thousands of Hohenberger images, housed at the Lilly Library, to pick images for the composers.

This whole experience has given Franklin a chance to build a concert event from the ground up, which is not an opportunity he gets at the Jacobs School. "It's actually kind of hard, because when you're in orchestra here, everybody tells you what to wear, what to play, when to be there. And for us, when we're trying to create our own opportunities and find them outside of the institution of the university, we have to do all that ourselves."

Hohenberger saw the same opportunity when he moved to Brown County in 1917. He said it was a place, "where I could be my own boss and individuality would count."

For Smith, Impressions of Brown County provided him a chance to write music he probably wouldn't have written otherwise. It also gave him a taste of life outside the school of music.

"Getting out is vital because that's how it is in the real world, and the sooner we start to do that as artists, I think the faster we begin to grow and the better our art will be."